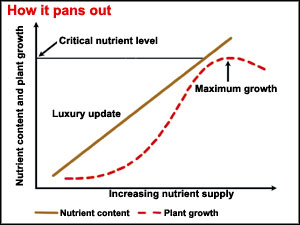 It is ironic that while India ranks third in fertiliser use worldwide, it ranks 14 and 16 respectively in the production of rice and wheat. It is even more ironic that India's fertiliser policy ensures precisely such a result.

The latter figure is a composite one; it points to the volume of use of 3 industrially produced fertilisers that mimic the properties of a soil's primary nutrients -- nitrogenous fertilisers (n), phosphatic fertilisers (p), and potassic fertilisers (k) -- and so are considered as absolute inputs for crop production. It is also a heavily skewed statistic: of the 16.7 mt pumped into the soil in 2000-2001, the amount of n used is by far the most (11.5 mt). There is nothing surprising about this skew. The form in which n is sold in the market is urea, and urea is the most preferred fertiliser. Above all, by those who make our fertiliser policy.

The main policy instrument to guide production and use of fertilisers is the retention price-cum-subsidy scheme, introduced in 1977. In theory, it is supposed to insulate farmers from rising prices, and ensure fertiliser consumption (itself an essential component of the green revolution strategy of agricultural growth) does not suffer. In practice, it has led to two terrible results: the government subsidises domestic private sector production of urea, and the balanced use of npk has gone completely awry.

The farm-gate price of urea is fixed at Rs 4,600 per tonne. For every tonne of urea sold to the farmer, the government bears a subsidy of more than Rs 4,100. As a consequence, the industry gets a free ride and farmers, seduced by the promise of lush fields and profits, prefer to dump urea on their fields.

Does this mean they don't want, or don't know about, balanced fertiliser use? Not at all. The fact is, they cannot afford p and k. Always more expensive than urea and less aggressively advertised, both these fertilisers were de-controlled (placed in the open market) on August 25, 1992. The government, then in a liberalising mood, did also talk about a concession scheme that would apply to p and k, but the harm was done. The rates of price concession (subsidy) have steadily increased. In 2001-2002, under the concession scheme, high-end fertilisers (n+p+k-based) such as di-ammonium phosphate sold for Rs 8,900 per tonne.

The effect of urea on a plant is immediate; it turns lush green. But the soil needs its other major nutrients, too, in order to remain healthy. The effect of skewed urea use has also unbalanced soils. While the ideal npk ratio is 4:2:1, in 2001 the ratio stood at 28:8:1 for north India, and the national average was 7:2.7:1 (see table: On edge).

Long-term fertiliser experiments conducted by the Indian Council for Agricultural Research (icar), New Delhi, in 17 soil-climatic conditions in the country turn these ratios into a worrying reality. For instance, it was found that in the alluvial soils of Barrackpore, Ludhiana and New Delhi, phosphate removal from the soil had more than doubled. While the mining of phosphate from soil in a control plot, where no fertiliser was applied, was 160 kg per ha, it shot up to 366 kg per ha when only nitrogenous fertilisers were used. It is the potassium reserves, though, that are the worst hit. Indian soils are considered rich in this nutrient, and farmers apply very little potash to crops. When they did use adequate amounts of potassium fertilisers, the yield and quality of crops improved dramatically.

The message is clear: soils are suffering from major nutrient fatigue, and are hungry for p and k. But, says Veluthayam, "this situation will not change unless there is coherence between the price of fertilisers and the income farmers get from produce, so as to encourage farmers to use all fertilisers. This must be the cornerstone of fertiliser policies."