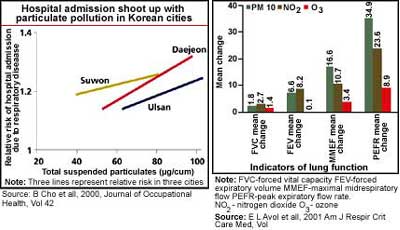 The health effect of ULTRAFINE particles - smaller than 0.1 micron in diameter - on human health was never properly studied. Epidemiological studies done till now only linked the effects of these particles on respiratory diseases not death. A German study sponsored by the Health Effects Institute has come as a breakthrough. Conducted in a small town of Erfurt, this is the first to show that ultrafine particles are also associated with human mortality. The investigators also found a delayed effect for ultrafine particles against an immediate effect for fine particles.


Six per cent of all deaths in Austria France and Switzerland are due to PM10 - more than 400deaths per year - half of which are due to vehicular emissions according to a WHO report of 1999.Vehicular pollution is also responsible for more than 250new cases of chronic bronchitis in adults more than 2900episodes of bronchitis in children and more than 5000asthma attacks. The number of people dying from air pollution was twice to those dying from traffic accidents. Lifespan of people in cities was reduced by 18 months.


Fine particulate have more surface area than the relatively larger particles. This makes them the ideal substrate for toxic chemicals which deposit and stick on to the surface of the particles. Often many of these chemicals are known carcinogens like polycyclic aromatic hydrocarbons (PAHs). As researchers from the Columbia School of Public Health New York University Medical Centre and some more health research institutes found out. In their study on Polish women in Krakow they concluded that PAHs deposited along with particles not only damage pregnant women and new born children but also have a bigger impact on foetus. They came to this conclusion by measuring the amount of PAHs bound to the DNA of maternal and umbilical white blood cells. Another study by the Harvard School of Public Health published in 2001 and conducted in Roxbury Massachusetts found more PAHs near diesel vehicles whose ultrafine particles carry the toxins to the respiratory system.

KOREAN MALAISE: A study conducted in three cities in Korea found respiratory diseases even when air pollution was below standards set by the government.


Studying fine fine particles must in no way ignore the threats from relatively coarse particles. Scientists studied the effect of particulates of different size fractions - from PM10 to PM2.5 - and several gaseous pollutants (sulphur dioxide, nitrogen dioxide, ozone and carbon monoxide) during 1985-1990 and 1992-1994. When the estimated effects of PM10 and one of the gaseous pollutants were determined concurrently the association between PM10 and health outcomes remained the same or became even stronger suggesting that PM has its own effect regardless of the presence of other pollutants. The study was sponsored by the Health Effects Institute.

The authors found that relative risks for PM10-2.5 were similar to those for PM2.5 and sometimes even higher. The finding of elevated and significant effects for PM10-2.5 suggests that there may still be a rationale to consider the health effects of the coarse fraction along with the fine fraction of PM.


Some of the most shocking discoveries are often accidental. Scientists at the Harvard School of Public Health and Dana-Farber Cancer Institute know it better. They stumbled upon a revelation while studying the health effects of exposure to particulates. In many cases gases like carbon monoxide were taking the blame when the real culprits were particulates - an issue that was earlier overlooked.

Scientists measured exposure to ozone, nitrogen dioxide, sulphur dioxide, carbon monoxide and fine particulate matter (PM2.5).Except for PM2.5 ambient concentrations did not reflect corresponding total exposures of a person for any of the pollutants. This shows that ambient fine particulates are suitable surrogates for personal exposure to PM2.5.


ELDERLY: A Canadian study sponsored by the Health Effects Institute in 2000 used three measures of particulate matter: coefficient of haze (COH)total sulphate and PM2.5. For each of the three particle measures investigators reported an association with mortality from respiratory diseases and other non-accidental deaths including diabetes. Additionally COH was associated with increases in cancer deaths; sulphate was associated with mortality from coronary artery disease and cardiovascular diseases. All associations were generally stronger for those above 65 years

ASTHMATICS: A ten-year study in Chicago found that people with asthma had double the risk of a PM10-associated hospital admission and that people with heart failure had double the risk for PM 10-induced chronic obstructive pulmonary disease (COPD) admissions. Another project investigated the short-term health effects of particles in eight European cities. For each 10 g/cum increase in PM10asthma in children (less than 14 years old) increased by 1.2 per cent and by 1.1 per cent in those between 15 and 64 years of age. For those above 65 years COPD and asthma increased by 1 per cent and all respiratory diseases increased by 0.9 per cent.

DIABETICS: Particulates can increase the risk of heart disease for diabetics. In a study conducted in Cook county, Illinoisa, team of scientists from the Harvard School of Public Health looked at the association of PM10 with hospital admissions for heart and lung disease in persons with or without diabetes as co-morbidity. A 10g/cum increase in PM10 was linked with a 2.01 per cent increase in admissions for heart disease with diabetes but only a 0.94 per cent increase in persons without diabetes.


Particulate pollution and heart attacks. Three independent studies conducted in Utah, Baltimore and Boston tried to find a link. In the Utah study researchers from the University of North Carolina and Harvard University measured oxygen saturation and pulse rate of elderly residents during winter when particulate matter concentration is highest. In the Baltimore and Boston study researchers took 25 minutes of electrocardiogram measurements of people weekly.

In the Utah study researchers found a small elevation in pulse rate was associated with a rise in PM10 levels. Both the Baltimore and Boston studies found that elevated concentrations of fine particulate matter were associated with lower heart rate variability and that the association was stronger for people with cardiovascular disease. Low heart rate variability is a marker of poor cardiac control by autonomic nervous system and is associated with a higher risk of heart attacks and sudden cardiac deaths. The study was published in 1999-2000.


If you want your child to grow up with healthy lungs move to a lesser polluted location. Fast. Because polluted air can impede lung function in kids. Researchers from the National Institute of Environmental Health Sciences in North Carolina studied 110 ten-year-old children growing up to 15 years who shifted to different cities with different levels of air pollution. They found that changes in annual average exposure to PM10 were associated with differences in annual lung function growth rates. Kids who had moved to areas with lower PM10 showed increased growth in lung function and those that moved to areas with a higher PM10 showed decreased growth lung function.