Mr Verghese, you live on through your words

Mr Verghese, you live on through your words 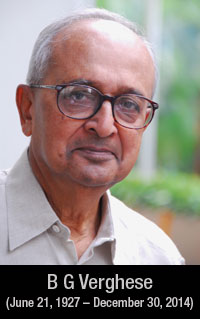 "Where is Mr Verghese's office?" Some 17 years ago I asked B G Verghese on the stairs of the Centre for Policy Research. "I am George [he is known by that name among friends]," he replied with a mischievous grin and took me to his office. I was embarrassed, but that was what Mr Verghese was all about. He belonged to a genre of editors who were more read than seen.

That was my first meeting with Mr Verghese after years of reading his articles. I was working for a magazine focused on the northeastern region of India, a region very dear to Mr Verghese. It was almost mandatory for a reporter writing on this region to read and know Mr Verghese’s views and analysis.

Since then, meeting Mr Verghese has always been an experience as he talked on how to merge research and popular journalism.

That is probably the reason why he served in the executive board of the Centre for Science and Environment (CSE). During the board meetings of CSE, his opinions, though few, were highly valued. More than institutional engagements, he would throw brilliant ideas for Down To Earth to work on. And, of course, he would remind the editorial members of the ideas that have not been worked upon.

He died on December 30 at the age of 87. Though the new generation hardly knows of his close link to evolution of environment and development journalism in India, his role as an editor to give space for development stories is legendary. Whether it is the landmark Chipko movement or the milestone Stockholm Conference, he was instrumental in giving space to such subjects in mainstream newspaper.

One of his big concerns was the decline of geography as a school subject. In one of the CSE board meetings, I once asked him why he was so concerned about this. His reply was stern: "If we don't understand geography, we don't understand history and the politics of environment." Then followed a brief spell of anecdotes on linkages of geography to conflicts and to environmental plunder in India and around the world.

It was always expected from him. A usually soft spoken Mr Verghese would turn into a stern commentator/teacher as one spoke to him on issues. One did not always agree with him, but he would hardly impose his views except speak one or two extra lines of arguments in his favour.

For environment journalists like me his support for big dams always came as a surprise. We disagreed with him; he would accept our concerns but would further support his stand with facts and figures.

Till his death, he remained a journalist with a “bias” as he would say. For him, the old principle of journalists remaining objective was a commandment but he also believed that in time of crisis journalists must take sides in support of greater public good. His bias was for development, human rights and democracy. At the same time, he never took up or supported issues just for the sake of doing it. For every word written, he put in hours of meticulous research in its support.

Mr Verghese, rest in peace wherever you are now. Journalists like me will restlessly pursue your values and passion called “good journalism”. You live in your words.