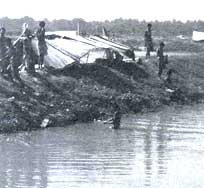 IT is the end of March. Sudhamoy Chakladar, the aged Kisan Sabha leader from Khardah, stands drenched in golden sunlight, contemplating the lush green fields sprouting rice saplings... for the unthinkable 2nd time this year. "It is a dream for the peasants. We've 6ever had this in the last 50 years. But today there are about 450 bighas (approximately 60.75 ha) which are growing rice during the dry season."

In fact, this is the Isf time ever, under the Ganga Action Plan (GAP), that such a feat has been achieved anywhere in the country. Just 20 kni from Calcutta, is the Bandipur project of the Calcutta Metropolitan Water and Sanitation Authority (CMW&SA) - a sewage treatment plant (SPT) with a difference. Situated on the east bank of the Hooghly, the project is treating 14 m litres of sewage emanating everyday from the Titagarh township, which has a population of 1.4 lakh.

The system is simplicity itself. using the common pond to purify the water for agriculture and pisciculture. The beneficiaries are the local farmers who had been living in poverty for all these years. The benefits have just started showing, and the project, now trans- ferred to the local panchayat, is regarded with much pride by them.

The cmw&sA has already completed the project in Panihati too, about 16 km from Calcutta, and is now into developing it in Bally., Dhrubajyoti Ghosh, CMW&SA's executive engineer and the mastermind behind the project, has completed writing the basic manual, entitled Integrated Wetland System for Waste Water Treatment and Recycling. It will be published soon by the United States Agency for International Development. The book has a slogan: 'For the P6orer Parts of the World With Ample Sunshine, Ghosh told Down To Earth.
Here, sewage water is channelised through a series of ponds. First comes the deep, anaerobic pre-treatment pond, where the heavier particles in the water settle down. "It is the simple action of bacteria which increases the oxygen content of the water in this pond, and the catalyst is the sunlight," Ghosh says. Bacterial action on the organic waste converts the latter into food for the algae and fungi. The latter, in the presence sunlight,,,release oxygen into the water.

From here, the water flows into a 2nd pond, which is the Ist of the treatment ponds. Fish cultivation starts in the 2nd pond, explained Chakladar. The Indian Institute for Public Health and Hygiene has certified that the water has a very high level of dissolved oxygen from the 2nd tank onwards. All the tanks are interconnected through minor sluices, and no pumps are used in this natural flow.

"The biological oxygen demand (BOD) removal rate is 90.95 per cent for the Titagarh spT. The influent BOD level is 200 mg/l, whereas the effluent BOD comes down drastically to just 30 mg1l," Ghosh explains.

The Bandipur project has 5 ponds over an area of 11.48 ha. The Panihati project has a total pond area of I I ha, and will treat 12 in litres per day. The initial cost of the 2 projects has been at the rate of Rs 1.6 lakh per milhon litres. Compare this with Rs 25 lakh required for setting up a plant treating 1 million litres in a conventional treatment plant, plus another Rs 5 lakh per year by way of maintenance costs.The cmw&SA made a I-time investment in buying the land, but on the whole, the process is virtually free, needing no overhead expenses, like the salary of maintenance personnel. The farmers run it on their own. "Besides, as against a conventional plant, this new method pays you back the money invested in buying land," explains Ghosh. The sale of crops and fish is lucrative business.

The unique thing is that the projects are run not by the municipal authorities, but by the panchayats. "This is Agenda 21 in action," Ghosh emphasises. "It speaks of the 'institutionalisation of the stakeholders' participation'. This is precisely what we have achieved here."

There were a lot of hiccups, though. It was difficult convincing the people to give up rice-yielding land for this project. "But we explained to them the possibilities of not one, but multiple crops, and of fish cultivation round the year." Chakladar and other Khardah people associated with the project smile: There was a time when Ghosh used to come and speak to the farmers for hours, anil they wouldn't budge ... he was perpetually complaining about his time being wasted. "One had to hear themout, and then talk to them in their own language," a satisfied Ghosh now sums up his lessons from this project.

But once the water Ist entered the fields and the 2nd crop became a reality, there was no looking back. Gradually, the project was handed over to the panchayat. Today the CMW&SA runs the pumps which bring in the,sewage. "The moment the panchayat can manage the money and skills to run them, we will give up these functions as well," Ghosh asserts. At the moment, intensive cropping, intermittent crops and crop rotation are being planned.

Will the soil be able to sustain such intensive cropping over many years? "Why not? The silt deposited here is pure organic fertiliser," Ghosh explains. "And it is not as if tonnes of silt are deposited everyday. It's just like the septic tank which contains the sewage outside your own home. That needs to be cleaned once in 10 years or so. Here, we will take out the deposits after 2-3 years, and put them back into the soil as fertiliser. The whole process is perfectly ecologically balanced."


This solution seems ridiculously simple now. But the search had begun 15 years ago. The reason that it took so long, Ghosh says, is that "our planners and engineers had for long remained blinded by western concepts." Thus, the Bandipur project takes one into the larger issues of ecological management. The project is the result of a whole process of "unlearning what the Western ecologists have taught us."

This year's ist edition of People 6, the Planet-says: "Over the past century, Calcutta-+as developed a system of sewage disposal that is among the most efficient-and ecologically benign in existence." The 3 majgr projects on this front are the East Calcutta Wetlands, which recycles the city's solid waste, the Mudiyali fishery project, where industrial effluent is treated, and the Bandipur-Panihati projects. In all 3, very little money is spent, and much earned.

Ghosh recounts how some senior Western ecological scientists had questioned him about this system. "My answer was that they were looking at the whole thing in terms of clearing pollutants. But for the local people, who had not been burdened with Western education, this was not a question of clearing pollutants, but of using a resource ... just the opposite attitude. Our whole education was wrong. It is a wrong perception of the entire problem, or rather, it is a developed-country perception of 'waste water'.

These projects, feel a wide range of concerned persons, is a question of our heritage, of the achievements of our native intelligence in handling a practical problem. "We should be proud of this," beams Nabo Dutta of Nagarik Mancha, a workers' resource group which has actively taken up environmental issues over the last 2 years. With 73 municipalities in the state being castigated by the Supreme Court for wasting crores of rupees of the GAP funds, Dutta firmly believes that the authorities should go in for this new system at the earliest.

With the completion of documentation of the process (the basic manual), the whole experiment has been given a scientific basis, and its replicability ensured. Ghosh is currently formulating the design manual, Meanwhile, he says, the steering committee of the GAP has decided to try out this process wherever possible, "taking into account the peculiarities of each city where it will be tried." Ghosh has actually identified other cities, notably, Madurai, where this can be, done.

Such a project inevitably runs contrary to local vested interests. "The question of who will own the bheries (fish ponds) comes up, and when you turn them over to the community, vested interests - local dons - try to block the process. Besides, there are those who could have made money out of constructing Western-model treatment plants. They are also against this.' In fact, there are times when the vested interests win, as in the suburb of Bally, where the project has not yet taken off.

But the compulsions of a global environmental movement and the resultant growth in awareness also act as a counter-pressure against such forces. "In the end, it is the sheer power of the scientific truth of the project, and our persistence in hearing out and then convincing the farmers, which are the only means which have succeeded and will succeed," Ghosh believes.