Months after the devastating floods in Jammu and Kashmir, thousands of victims are still waiting to be rehabilitated. Meanwhile, this year's heavy rainfall left people in the Valley worried 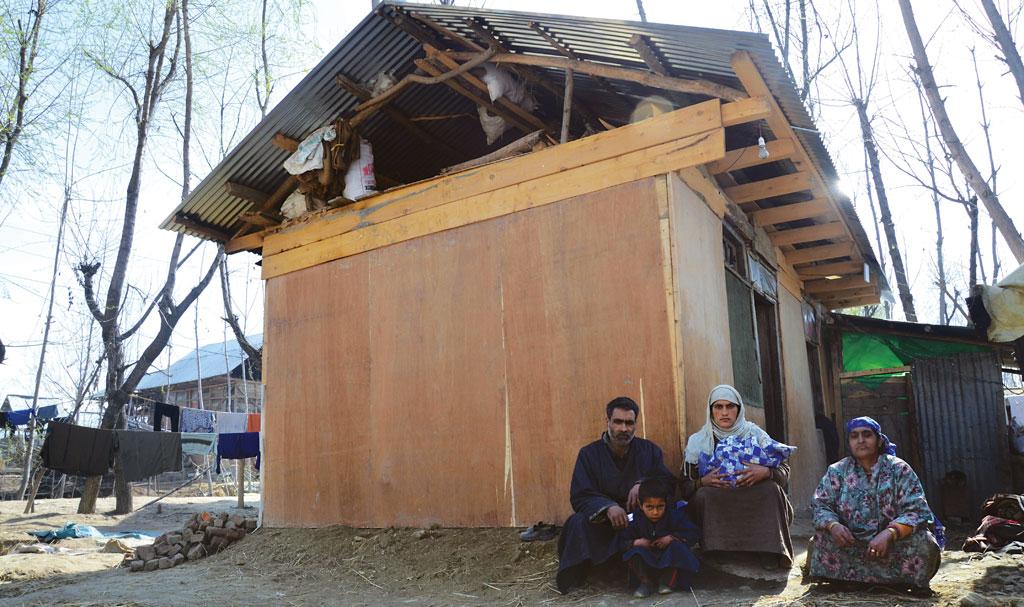 Residents of Srinagar and other parts of Kashmir are keeping a close watch on the Jhelum after the administration sounded a flood alert on Wednesday night. With incessant rains lashing the Valley, the Jhelum has crossed the danger mark in Anantnag and Pulwama districts.

People are spending sleepless nights in Srinagar as they are worried that sudden flooding could leave them stranded in their homes, like it did during the flood in September 2014. This is the fourth flood alert issued by the administration since then.

Floods in 2014 claimed around 300 lives and destroyed property worth crores of rupees. In a post on a social networking site, Shakil Romshoo, head of the earth sciences department at the University of Kashmir, said, “The analysis of the past flood data (70 years) and the hydrograph of these three flood episodes (alerts) indicates that the probability of the next one turning real is very high.”

He questions the authority’s inaction regarding precautionary measures, but officials confirm the situation is under control.

Several thousands of those affected by last year’s flood are still living in temporary shelters, with little money or means to get back to normal life.

Naseem Begum in Palhalan Ghat Pattan village of Baramulla district was blessed with a baby on March 20 this year. More than celebrations the occasion triggered worry. Her family of five has been living in a 10x10 m tin shed since the flood in September 2014 washed away their two-storey house. During pregnancy her baby was safe from cold in the womb, while she confined herself to a relatively warmer corner of the shed. Now she desperately wants a proper shelter before the monsoon, which will be followed by winter.

Another resident of the village, 30-yearold Nisar Ahmed Dar remembers spending two months in a school with his wife and three children after his house was submerged. He still has no house. There was no food for a few days, nor medicine. When he returned to his house after water had receded, he found it had collapsed. His four cattle heads had drowned and his boat was broken.

Then, the Jammu and Kashmir government reached out to him with a relief of Rs 6,300. “This is sheer mockery of the pain I have gone through,” says Nisar. “This is not enough for even fodder for the remaining cattle.” Floods had destroyed the ripe paddy crop in the region. People in the village now purchase paddy as fodder for Rs 25 a kg from Vanipura, 50 km away.

Barely 75 of the 250 cattle heads have survived the flood in the village. Nearly 200 of its 500 houses have collapsed. All the homeless are living in tin sheds that were put up with the help of civil society groups and a small amount the government gave.

Like Palhalan Ghat Pattan, more than 700 villages in Kashmir were submerged in September last year and over 92,000 cattle heads perished, as per government data.

The flood was the most severe in the valley in 109 years and claimed about 300 lives (see ‘In a tragic state’, Down To Earth, October 1-15, 2014).The most affected districts included the summer capital of the state, Srinagar, Anantnag, Baramulla, Pulwama, Ganderbal, Kulgam, Budgam, Rajouri, Poonch and Reasi.

At least 13,000 families are still living on rent in the valley as they have lost their houses. Nearly 200,000 houses were fully or partially damaged in the flood, according to the state Economic Survey 2014-15.

“The flood affected everybody and all sectors from agriculture and trade to livestock and tourism,” says Mohammad Yusuf Chavni, chairperson of the Houseboat Owners Association. According to Chavni, 16,000 houseboats collapsed completely and Srinagar is left with only 1,950 houseboats.

Uphill task and a slothful beast

Pulling the state back from such a setback is a big challenge. But the state and Central governments’ response has been far short of it. After releasing an immediate relief of Rs 1,100 crore, the Central government did not release any big amount for a long time, saying the method of estimate was unscientific.

Nine months later on June 16, it announced that it would release Rs 1,667 crore. It is a pittance considering the current Jammu and Kashmir government has sought Rs 28,000 crore for reconstruction and rehabilitation.

This amount is still less than Rs 44,000 crore demanded by the previous Omar Abdullah government. Mohammad Yaseen, chairperson of the Kashmir Economic Alliance, goes a step further and says the loss could be to the tune of Rs 1,00,000 crore.

“The money to be released is a humiliation to Kashmiris and unfortunately the suffering will prolong,” says Sheikh Ashiq, president of Kashmir Chamber of Commerce and Industry. Most people Down To Earth spoke to agreed with him.

The delay in rehabilitation is partly political, says Hilal Mir, associate editor of Kashmir Reader, a leading newspaper in the valley. Former chief minister Omar Abdullah kept delaying the process because of state elections, he alleges. Harsh winters, Assembly elections and then the absence of government in the state for two months also slowed down the administrative process.

In February, a team of World Bank visited the valley to estimate the loss. In the beginning of June the World Bank approved $250 million (Rs 1,600 crore) for the reconstruction of public infrastructure in Kashmir.

However, the Central government is yet to finalise the amount to support the state’s rehabilitation work. Officials from the finance ministry and niti Aayog are expected to visit the state to discuss the proposal. “If the Centre begins estimating the damage again it will only add to the delay while the situation on the ground worsens,” says Shujaat Bukhari, editor of Rising Kashmir, another leading daily in the valley.

Nine months have passed and little has been done on the ground except disbursement of token money as immediate relief. The state government’s own estimate shows 1.25 million families have been affected.

Rehabilitation, though urgently needed, will not be enough. To avoid floods the valley will have to put its drainage system back in place. In March, a flood alert caused panic among the people. Mohammad Shubhan Labhan, a resident of posh Rajnagar locality in Srinagar, rushed to a nearby bridge with his family and spent two nights there.

After incessant rains people began shifting their belongings to higher stories. “This time also the chief minister came and told us to shift our stock from shops to some secure place. Is it a joke?” asks Din Mohammad Matto, president of the traders’ association in Lal Chowk, the commercial centre of Srinagar. He says almost 90 per cent of the city’s drainage system has failed because the government does not take care of it. Earlier, the Jhelum river passing through the city was dredged from time to time but this does not happen now.

Altaf Bukhari, flood and irrigation minister of Jammu and Kashmir, agrees that encroachment of floodplains and silting of the river made the flood devastating. He says that while building flood channels will take years, the administration will soon begin removing encroachment and dredging (see ‘We did not act smartly’).

Chances of a small flood are high in the valley, warns Shakil Romshoo, head of the earth sciences department of Kashmir University. Hundred years of Jhelum flood data shows that a small flood follows a large flood within a year or two. “Therefore, the probability of flooding this year and the next is high due to high levels of groundwater and the water in lakes, other water bodies and wetlands in the Jhelum basin. However, this will be a small flood in all probability,” Romshoo says. “In the absence of worthwhile post-flood rehabilitation, vulnerable sections will have to face difficult time once again.”