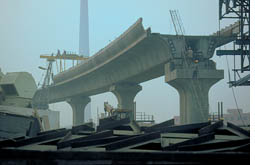 Cities have long been held as agents of economic growth. In recent times, urban buoyancy has been cited as among the main reasons of India's consumer revolution. There is a damper though. On June 27 2007, one of the country's leading economic research bodies released the draft of a report that raises serious questions on India's urban planning.

"By no criterion, India qualifies to be an urban nation," states this report prepared by economists from the National Institute of Public Finance and Policy (nipfp). Om Prakash, Mathur professor of urban economics and finance with the institute explained why. "Only 30 per cent of India's population lives in urban settlements and the growth rates too have been at best moderate," he said. Mathur was speaking at a gathering of experts who had gathered to discuss the study conducted by his institute.Called India Urban Report, preparing for an urban transaction, the analysis was commissioned by the Union ministry of urban development. nipfp was asked to look into the changes taking place in the country's urban economy, infrastructure and services, and the mechanisms of decentralisation

The discussion on the report brought some rare moments of candour. Montek Singh Ahluwalia, the deputy chairperson of the planning commission, said, "Planning efforts so far have evolved supporting a market economy, but the provision and delivery of services won't happen as a result of market forces. Steps will need to be taken towards that." "We build flyovers and hotels in order to host the Commonwealth Games for instance. But is that what the city really needs?" he asked.
A key feature of India's urbanisation is the increasing concentration of urban population in the comparatively larger cities. There are, however, no trends toward demographic primacy--one single city considerably more populous than the rest. The seven largest Indian cities, Mumbai, Kolkata, Delhi, Chennai, Bangalore, Hyderabad and Ahmedabad have entered a phase of metropolitanisation, the report notes. In other words, they are extending out to become extended urban corridors. Population growth rates are higher in the periphery than in the core of all these cities, except Bangalore. Mathur says this has serious implications on infrastructural necessities like housing and transport.

He said that the urban workforce has remained more 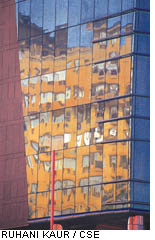 or less stable, and manufacturing remains the core activity, accounting for 23 per cent of the total workforce, followed by wholesale and retail, and hotels and restaurants at 22 per cent. But the report also says that the composition of the country's net domestic product has changed over the years and manufacturing is no longer the key factor here. It's also not a key constituent of the gdp. Manufacturing has been replaced in urban areas by public administration, defence and other miscellaneous services.

New economic activities such as financial intermediation and formal real estate development will characterise future prospects in the economy of urbanisation, the report notes. It also talks of large imbalances in the levels of urbanisation within the country.

In states like Goa, Gujarat, Maharashtra, Punjab and Tamil Nadu more than 35 per cent people live in urban centres

But only 20 per cent of people in Uttar Pradesh live in cities, only 14. 3 of Orissa is urbanised and 10 per cent of Bihar lives in urban centres 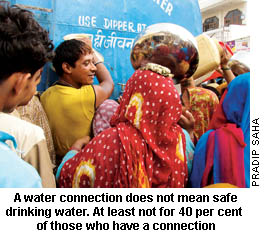 "There's been a consistent decline in the proportion of urban poor, but the numbers of urban poor are rising," Mathur argued. So, is poverty urbanising in India like in other parts of the world? Mathur said that there isn't much evidence to support this, as the report's regressions run for different time slots suggest that except 1993-1994 there was always a negative correlation between urbanisation and poverty.

The report also notes that states in India with roughly the same average consumption have different proportions of people living below the income threshold.


In general, access to infrastructure services is higher in states with relatively higher gdp, with Delhi and Kerala as outliers on the higher and lower sides respectively. Road density is especially high in Delhi compared to all other states.

The reliability, adequacy and quality of infrastructural services is, however, low and also variable on average.

90 per cent of all urban households have water connections

• The average water availability is 2.9 hours per day, and 40-60 per cent of the water released is lost to theft and distributional leakages and inefficiencies

Even though there is a large demand-supply gap in the provision of infrastructure services, investments continue to be low. Additionally with the tariffs of the services such as water and transport being lower than the costs, there is little initiative to expand and allocate resources to them.

As of now, the private sector participation too is in the form of small-scale operations. Investments by private operators are at low levels and these operators have not brought in significant technological improvements. Private sector participation is, however, growing slowly; presently the activities are limited to solid waste management, street lighting and construction of market and commercial complexes.

K Jothiramalingam, principal secretary in Karnataka's department of urban development, talked of a few significant bottlenecks to privatisation. He said, "In Bangalore, for instance, private companies are ready to take up water distribution, and people are ready to pay for water but they are concerned that if this happens the tariffs might go up. There is a need for a regulatory regime, so that prices are fixed in consultation with urban local bodies.


Improving the efficiency and responsiveness of governments requires decentralisation of political, fiscal and administrative powers. "A process whereby functions and sources of revenue are transferred between the different levels of the government was established in India in 1993," informs the report. The role of urban local bodies has widened from the times when they dealt with public health, sanitation and water supply. Today they are also deemed responsible for economic and social development, urban and town planning, protection of environment and poverty alleviation. But there is also much confusion over the precise role of these local bodies. Their responsibilities overlap with state departments over a lot of issues. 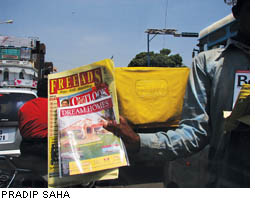 Moreover, there has been an erosion of the tax base of these local bodies in states such as Rajasthan due to the repeal of property taxes and octroi. These bodies thus don't have the wherewithal to take on additional responsibilities.

Spending by Indian local bodies is 0.6 per cent of the country's gdp

The figure compares poorly with the spending by their counterparts in Brazil and South Africa 4.5 per cent and 6 per cent respectively

Many participants felt that roles of urban local bodies need to be clearly delineated. "We are simply not clear as to who is in charge", said Sivaramakrishnan. Ahluwalia agreed that we face an "institutional crisis".

M Ramachandran, secretary, ministry of urban development, concluded by stressing on "access to information". Mathur made another significant remark. "We have to look into the smaller cities too. The different sates are urged to list out the problems so that we can see how things can be taken forward," he said. He ended the meet by saying that "we don't know if we can take into account all the points, but we have a look at them before presenting the final document to the ministry".