Research efforts on natural colours are not helping the traditional industry 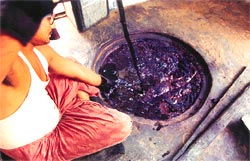 We know the potential, we know the opportunity. We have the necessary diversity and the knowhow. But still, not many plants are in use for extraction of dyes in India. Of 40 species of indigo found in India, only 16 yield the dye and only four are commercially grown in India. This is because there are barely any scientific studies on sources of natural dyes. For instance, properties of lichens, a good source of natural dye, are still largely unknown. There is no study to screen the dye bearing capacity of animals. Shell fish and molluscs can also be investigated.

However, there is some scientific activity to use biotechnology to produce synthetic versions of colours (see box: Indigofera tinctoria). There is some work on use of abundantly available forest biomass as natural dyes. "We have experimented and developed knowhow to extract dyes from leaves and bark of eucalyptus, bark of poplar (Populus deltoides), needles and bark of chir (Pinus roxburghii), seeds of Cassia fistula), leaves of Lantana camara and teak (Tectona grandis)," informs Rameshwar Dayal, scientist at the Forest Research Institute (fri), Dehradun.

A target for scientific research are the forests. "We need to do a chemical screening of plant materials in Indian forests, particularly vegetable wastes. Even weeds and different herbs and shrubs should be studied for dye sources. Agronomical practices, chemical modification and purification of dyes is also a research area," suggests Farooqi. Recent studies to improve the efficiency of dyes were carried out at iit, Delhi, iit, Kanpur and nbri, Lucknow. Gulrajani, and Deepti Gupta at the department of textile technology, iit, New Delhi, researched extraction and purification of natural dyes through sophisticated techniques such as chromatography and uv spectroscopy. They are also trying to develop simpler methods of application besides developing pretreatments to improve dye uptake and aftertreatments to improve colour fastness.

Padma S Vankar, head of the Facility for Ecological and Analytical Testing (feat) at iit, Kanpur, investigated the microwave and sonicator systems, scientific appliances based on principles of sound, for extraction and processing of dyes. "We wanted to study the effect of a combination of dyes for dyeing cotton fabric. A mixture of marigold or tessu flowers and pomegranate powder was used for microwave dyeing of cotton using metallic mordants and biomordants, obtained from natural sources," Vankar informs. "Dyeing with a mixture of natural dyes yields excellent colour fastness in cotton fabric. Moreover, sonicator extraction of dyes is much faster and economical than conventional methods," she added.

Kapoor and his team at nbri are involved in screening dye yielding plants, standardisation and extraction through precipitation method, vaccum concentration and spray drying technique. "The work involves standardisation of the dye for good fastness and development of shades using different natural and chemical mordants," says Kapoor.