No water where the oceans meet

No water where the oceans meet 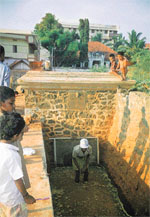 the float festival will once again be held in Kanyakumari. With water from the Pechiparai dam in the Western Ghats reaching Theppakulam -- one of the three Kanyakumari Goddess temple ponds -- people of the town are eagerly looking forward to next year's 'Theppam' or float of the deity, conducted on the pond. The occasion also marks the commencement of possible recharge of ground water aquifers at the southern-most tip of the country. According to members of the local community this has taken place after a period of 25 years.

The area has been facing an acute water shortage due to the total lack of planning in the face of a manifold increase in tourist and pilgrim traffic. "The cape is in a rain shadow and water has always been a problem," says Sathya Moorti, an engineer attached to Vivekananda Kendra, a non-governmental organisation located at Kanyakumari and involved in the maintenance of ponds in the region. The shortage of water was first felt a decade ago, added Moorti. Big hotels, initially, drilled deeper and deeper to get to the ground water but soon there was no water to draw. Later, they shifted to purchasing the nearby wetlands and began pumping out water, sending it to the hotels by tankers. "Even today scientific management of water is not a priority," said Moorti and this view point was endorsed by almost all the locals.

Living on the peninsular tip is Muthunayakam. He has a huge water tank in which he stores enough water for a month. Muthunayakam is just one of the residents, who are affluent enough, to have tanks. The big hotels have their own private tankers which make several trips to nearby areas for water every day. An indicator of the number of tankers making the rounds is the state of the roads around the town which remain perpetually wet.

Kanyakumari is one of the most important pilgrim centres in India. As it is one of the four 'dhams', people from all over India flock to the town the year round. For many, from the north of India, it is a life-long ambition to come to Kanyakumari. Because of this the need for reviving the ancient water sources in the town was felt.

The temple ponds were built in the days of the Travancore kings, when Kanyakumari was part of present-day Kerala. "Filling of the temple tanks was the first step to sending water to the plains from the Western Ghats," said Murugesan, an old-timer in the town. This practice had been discontinued, in the process preventing the necessary regeneration of groundwater aquifers. Two huge temple ponds are still lying abandoned. "It was thirty years ago that these were filled last," Moorti went on to charge the popular governments of the past with inefficiency in his comparison with the earlier kings.

In medieval times, meticulous care was taken by kings of the region to ensure that pilgrims enjoyed their visit. Thus records with the Kerala state Archaeology department mention the Chola kings ordering the construction of Chakkrakulam and the granite 'mandapam' nearby for the pilgrims. The kings also decreed that an adequate number of paddy fields be set aside for keeping the pilgrims supplied with rice for a gruel-like meal called 'kanji'. Salt pans were also placed at strategic locations in case the pilgrims needed the vital ingredient for their meals. The people's participation was essential in almost every walk of life. This tradition was kept up until after independence when people -- in their greed -- began ignoring the custom.

However, the task of bringing water to Theppakulam was far from easy. To bring water to the pond, the engineers had to clear the canal that brought water from Pechiparai dam -- about 50 km from Kanyakumari. The dam also provides water to adjacent fertile regions. The canal had all but disappeared after being abandoned over the years and had to be dug up at many places. Engineers of Vivekananda Kendra, who had undertaken the task, and state government officials worked round-the-clock on the two-kilometre canal as there were encroachments at many places.

The entire exercise was part of the Tamil Nadu government's participatory programme 'Namukku Name' meaning 'One for oneself'. As the project had the enthusiastic support of the present district collector S Pandian, the necessary funds were allotted and with the involvement of two state government officials K Selvaraj, Project Officer drada and Suresh Kumar, Engineer, work was finished in good time. The project was one instance of the government and an NGO coming together by-passing the morbid establishment of the day. Besides the Vivekananda Kendra, a number of hoteliers, the Rotary and Lions Clubs and the People's representatives of Kanyakumari Municipality assisted in the completion of the work. For the moment, children are enjoying the fruit of their labour and they can be found frolicking in the pond as the swirling waters rise.

All ponds, including the other two Chakkrakulam and Pathrakulam -- 'kulam' in Tamil means pond -- and the connecting canals are all on temple property and have been extensively encroached on with political connivance. Huge hotels and houses, shanties and hawker's stalls have only managed to stifle the regeneration of the ponds. The present state of affairs came about following the transfer of temple property to the Tamil Nadu state government after Kanyakumari was included in the state.

Commenting on the work G Vasudev of the Kendra said, "Once the pond is filled, lining of the canals shall be taken up." The pond, 200 ft in length and 25 ft deep, is a good source of ground water re-charge in the area. Work is yet to begin on the other two ponds.

But Moorti was cautious. "Filling just one tank in a parched land may not help much and water may be lost due to seepage into the ground," he said. "What is needed is a composite watershed blueprint, with plans to fill more ponds and rain-water harvesting schemes." Coming after thirty years that should be good news and augurs well for the place where the waters of the Arabian Sea, Bay of Bengal and the Indian Ocean meet. With additional water harvesting structures, Kanyakumari may see a return to the days of plentiful water.