Officials are now promoting a new paradigm for flood control. They are pushing for a huge dam in Nepal. Does it provide scope for further corruption? 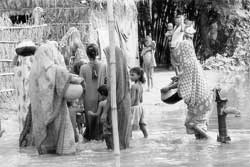 This north Indian state is today a land of paradoxes. It is known both for its mineral wealth and its abysmally poor people. Here we can find corrupt bureaucrats, flushed with funds and personal wealth and a state as deprived of money as the poor who eke out a miserable existence in its villages. The poverty is very visible particularly in those villages that have the misfortune of being close to or located in the flood plains of the many rivers, which spread a serpentine network over the resource-rich lands of the poor farmers.

Bihar is also known as the state of rapacious appetites and extreme penury. Here a politician can gobble up Rs 500 crore in a jiffy, and a chicken in a state run farm can consume 50 kilogrammes of feed in a day. Even buffaloes have been known to be miserly and ride pillion on scooters during the height of the fodder scam.It is appalling how these funds have managed to line the pockets of senior politicians and increase their personal wealth. Are there more scams lurking in the background?

The victims of the original scam, the Kosi Project, can be found everywhere today. They are either dreaded criminals or landless workers (see box: Eyeless in Bihar ). They ride rooftop on trains, migrating to Punjab and Haryana in search of jobs or farmland to till, as their own has been swallowed up by embankment-induced waterlogging. Others can be found eking out a miserable existence in the state itself. In Saharsa and Supaul districts, more than half a million people have been living in sub-human conditions for years.

According to Lal Mohammed, head of the Paharpur basti , situated on the Kosi retired embankment, "Most of the people have gone to Punjab and other states of India, even Nepal, in search of jobs. We supported the construction of embankment in 1950s. That was a big mistake on our part. Today, we are paying a heavy price for it."

"When the government started constructing embankments, we opposed the idea. We knew that the area will become permanently waterlogged. Whatever we predicted in those days is becoming a reality today," says Kunwar. Devnarayan Yadav of Sorbazar in Saharsa district, says, "Embankments have proved to be more destructive than we had imagined. My fertile agricultural land is now in the Kosi river. I regret supporting construction of embankments in the 1950s."

"We call ourselves the victims of the Kosi project," says Bhagwanji Pathak. And they are more than justified in saying so. A stretch of around 3 km to 5 km on the eastern side of the eastern Kosi embankment (from Bhimnagar to Koparia) is permanently waterlogged. Rainwater and seepage from the embankments is primarily responsible for this. This has destroyed farmland and led to the rise of several diseases.

"The area has an acute drinking water crisis. Tuberculosis, kala-azar and malaria have become common. Kala-azar was very rare in this region, but from 1978 onwards it has spread alarmingly," says Bashi Kant Choudhary of Saharsa town.

Jagdanand Singh, the present minister of water resources in Bihar, had stated at public meetings in 1993, that "his government did not participate in construction of embankments along the rivers as it was aware of the disastrous consequences". However, from 1991 onwards the annual reports of the water resources department in Bihar provide data which contradicts this statement. According to the reports: "Ten embankment schemes are still under construction. The total proposed length is 872.74 km and the area to benefit is around 0.63 million hectares. Only 556 km of embankments have been constructed so far, which has given protection to around 0.32 million hectares. It is getting difficult to complete these schemes because of paucity of funds."


The new paradigm of flood control being proposed by officials today is faulty. To begin with it envisages the setting up of a dam in Nepal, an area noted for seismic activity which would be linked with the embankments in the state. This could merely increase the scope for further corruption.

On April 6, 1947, C H Bhabha, member, ministry of works and power, government of India, proposed the construction of a large dam with 0.31 million cubic metres (mcum) of water storage capacity at Barahkshetra in Nepal's Chatra valley at a cost of Rs 100 crore. It was also to generate 1,200 megawatts of power and its canal system would irrigate 1.25 mha of land in Nepal and India. However, on June 5, 1951, the Union government constituted a committee, chaired by S C Majumdar, advisor engineer, Government of West Bengal. This committee scrapped the project on the grounds that the power generated by the project will remain unutilised. Environmentalists, too, opposed the building of the dam because of the site being earthquake-prone.

Government officials, however, maintain that the dam is the only solution to the problem. The government of Nepal has not responded enthusiastically. It says that the proposed site is located too close to the epicentre of an earlier major earthquake (see interview: No one in the world can manage floods better than us ).

In 1987, when the floods occurred, the then chief minister, Bindeshwari Dubey, put the blame on Nepal. Journalist Kuldip Nayar while writing in The Tribune in Chandigarh quoted Dubey as saying, "Nepal does not allow us to install warning devices." The expert committees that were set up during that period recommended a further elevation of the existing embankment. The government said that till the time big dams come up in the Nepal Himalaya, it will be forced to stick to embankment construction as a measure to control floods.

Mishra says: "The dam cannot control floods for the simple reason that the location of the site is not proper." The Kosi has a catchment area of about 59,000 sq km. Of this, 14,000 sq km is located below this proposed dam. This equals the catchment area of the Baghmati river over which the dam will have no impact whatsoever. A similar quantity of water still flows outside the Kosi embankments and causes acute waterlogging. If the embankments remain intact, the situation within the embankments, too, will not change. Further, it will require around Rs 40,000 crore today to build this dam. "The state government would find it really tough to repay the loan taken from various international funding agencies, including the World Bank," he says.

However, T Prasad, director, Centre for Water Resources Studies, Patna, opines: "If the dam is constructed, and the water resources are properly managed, farm income and employment will increase by 15 times." So it would not be wise to rule out the possibility of a dam without conducting a feasibility study, he adds.

It cannot be said for sure that there is any paradigm for flood control. Perhaps the best alternative is to try and learn to live with floods as people did traditionally. "Even after 40 years, we are ready to live with the same river. We don't want these embankments," says Khan.

However, one thing is definite. The construction of embank-ments corrupted society in Bihar. The state is a unique case study of how poor environmental management, especially one which emphasises construction, leads to corruption which may be difficult to get rid of, especially if it gets interwined with the local political culture. The floods were welcomed traditionally. When they came there was gold in the silt the rivers brought with them. A bumper crop followed and the people were prosperous. Today the gold is in the files some babus of Bihar hold close to their chest. Files that hold contracts to carry out flood control works. The people are caught between the embankments and the bureaucracy. And there seems to be no respite.