Noamundi is easy to mine

Noamundi is easy to mine 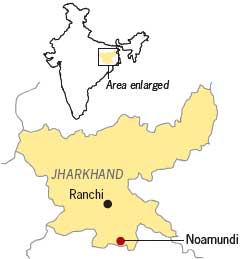 No rules to check illegal practices in iron ore-rich Jharkhand

Folklore has it that when iron ore explorers first came to Jharkhand, they were surprised to find tribesmen using axes made of iron. When asked about the source of the iron, the tribesmen pointed to a hill and called it Noamundi, meaning "that hill" in their language Ho.

Rich and unprotected reserves of high-grade iron ore, including premier quality blue dust, have made this small town every steel giant's dream. But the blue dust has changed the colour of the landscape to red.

Noamundi is now the hub of large-scale illegal mining. There are no rules here.

Mining is easy--all one needs is a crusher machine and labour that is available at Rs 40 a day. Transporting the ore is even easier.


Officials of the state's mining and transport departments, including the Indian Railways, are aware that millions of tonnes of iron ore are transported from this belt, but there are no measures to check this. Until May 2008, there were no limits on transporting any amount of ore.

On May 12, the Indian Railways introduced a Wagon Loading Freight Rule, where the railways refused to book iron ore without seven official papers, which included factory licence, certification from the pollution control board and the central excise department.

The rule also has provisions to facilitate easy transportation of illegal iron ore. If one doesn't have the seven documents, one can always pay three times more to get the ore transported. "It is difficult to differentiate between legal and illegal iron ore," said A Purty, goods clerk at the Noamundi railway station.

Purty's lack of concern is no surprise considering that the Chakradhar-pur railway division has earned rewards for record loadings of iron ore. Noamundi, in West Singhbhum district, is under the division, which saw an increase in per day wagon loading from 6,970 wagons to 7,415 wagons.

The division was awarded the Govind Vallabh Award in 2006 for increasing revenue by 49.5 per cent within a year.

The recent boom in iron ore prices has also made Noamundi a favourite destination among steel plants in China. Nearly half of the illegal mined ore finds its way to Paradip port in Orissa for export. Every night, nearly 5,000 trucks carrying iron ore leave a red trail in Noamundi.


The trucks mean business for villagers, who climb these slow moving trucks, collect ore and throw it off the trucks. They sell the ore to dealers or small steel plants. Villagers manage to rummage one truckload ore in three days. Any attempt by truckers to stop the villagers is retaliated with blockades.

R N Prasad, mining officer of West Singhbhum, finds himself incapable of stopping illegal iron ore trade. "Yes, there is rampant illegal mining in Noamundi. International racketeers export ore and there is no system to check that. We do not have any figure on how large the racket is, but iron ore worth crores of rupees is transported from Noamundi," he said.

There is shortage of manpower and vehicles in the district mining office. With no armed personnel, the mining department carries out raids with police's help. In the past three years, it has carried out more than 104 raids and seized scores of crusher units, but the effort has yielded no results.

"Earnings from iron ore are huge and the operation cost minuscule. Even if we seize crusher plants worth few lakhs of rupees, it has no impact on the big racketeers who easily secure bail for their employees arrested during raids," said Prasad.

The mining department has one inspector who is in charge of the entire district. Sometimes, illegal miners attack raid teams too. "The department has its compulsions," Prasad added. He recalled an incident when one Mohammad Akhtar Alam was arrested on charges of illegal mining. But Alam got bail within a week and started operations again.


According to official records there are 169 illegal crusher units in Noamundi that generate around 2,000 tonnes of illegal ore in a week.

The state government's approach towards putting an end to illegal mining has led to major bureaucratic reshuffle leading to controversies in the past.

Alam said he could not do anything despite procuring satellite images that showed heavy illegal mining in Noamundi and other areas in the state. Other cases also point that Koda took little action to check illegal mining (see box Between friends).

The fact that there are no laws was acknowledged by a study by the state assembly in 2007. 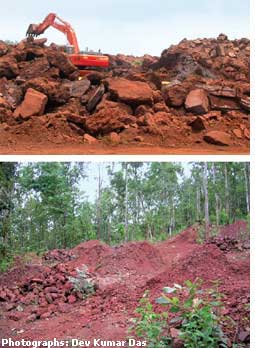 "... illegal crushers in Noamundi is the root cause of the illegal mining. Fanning this lucrative unlawful activity is non-formulation of rules and law. There is no law or rule to monitor how the ore is brought to crushers and where it goes from there," reads the report of the special working committee headed by Jamshedpur West mla Saryu Rai.

The report also said the state pollution control board was too weak to check the illegal crushers. "Even after having ample proof that is enough to prosecute a defaulting unit, (pollution control) board finds itself incapable of lodging police complaint," the report read.

It's unfortunate that the report did not generate action, Rai said. "No steps have been taken. Everyone knows about the massive illegal mining in Noamundi, but the government itself is involved in promoting it," he said.