Maharashtra on way to ban illegal graziers from other states 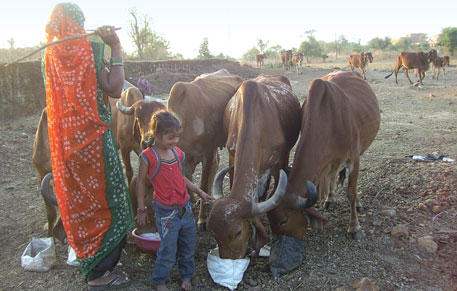 Every day Ramji Jograna, along with his brother and son, goes to a well to draw water for their 200 cows. They earlier used to depend on a water tank in village Koili in Maharashtra’s Nagpur district. But after protests by the village the clan gave up their decades-old water source. The deputy sarpanch of the village says the Jogranas’ cattle dung dirties kutcha roads.

The Jogranas are nomadic pastoralists of Bharwad caste, who travel every year from their native Surendranagar district in Gujarat to Nagpur and beyond in search of fodder for their indigenous Gir cattle.

Already under pressure from shrinking grazing land and rising hostility of farmers who once used to await their arrival, Ramji does not know his woes are going to increase. Four months ago, the Maharashtra government issued a resolution. It states that no forestland is left to support animals of other states. If herdsmen wish to graze their animals, they must do so on private land and present documents to that effect—written certification from the concerned land owner expressing availability of fodder. In case of illegal grazing, owners can be arrested and their cattle can be confiscated permanently (see box: ‘Resolution says ...’). Whether the resolution has been implemented by the forest department is not clear. Citizens in Gadchiroli in Nagpur have reported presence of sheep and goat herds in forested areas, which is banned by the resolution. When contacted, Nagpur Chief Conservator of Forests did not comment on the issue.

Lalji Desai of NGO Maldhari Rural Action Group in Kachchh, Gujarat, says such government orders are a way to finish off pastoralism. “First, the government bans entry of small ruminants. Secondly, it is impossible for any pastoralist to obtain the requisite documents since no single farm can provide enough fodder for the entire season for even a herd of 50 animals,” he adds. The grazing routes of pastoralists are not hard and fast, points out veterinary scientist Nitya Ghotge of Pune-based NGO Anthra. “The entire process is flexible and dynamic, and herds move according to the availability of fodder,” he says, adding, “Rigid rules like this one can only be self-defeating.”

With pastures shrinking rapidly, the economic rules of pastoralism are also changing fast. The age-old custom of farmers paying pastoralists to graze animals on farmland has disappeared from Maharashtra, thanks to irrigation facilities and chemical fertilisers. “We now have to pay farmers Rs 300 to Rs 500 for a day’s grazing,” says Maldhari community grazier Ramaji Algade in Nagpur. The fact that milk prices have increased—most Maldharis sell their milk to leading dairy companies like Haldiram’s at Rs 20 per litre—is a small consolation against the setbacks. In view of such reverses, most pastoralists want to settle down. Many have got ration and voter ID cards to save them from persecution as “outsiders” but they have not been very helpful since pastoralists do not have grazing rights. A few have been able to cash in on the rising trend of landlords not cultivating their land and leasing land for grazing. In village Lakhodi, Rodaji Chavan and his three brothers have been taking 50 hectares (ha) of inferior fallowland on lease for grazing their 300 Gir cattle for the past few years at Rs 250 per head of cattle per year. “It marginally brings down the fodder crunch and we can stay in one place. But we still have to buy additional fodder and graze cattle in the forests,” he says.

Buying land, even for residential purpose, is impossible for pastoralists because as per law only those registered as farmers can purchase land. “In Surendranagar, 4,000 pastoralists have been issued notices to the effect that their land is to be restored to the original owners (farmers),” says Desai.

In Mendhi Pathar village in Nagpur, a pastoralist family of five brothers managed to get a 55 m2 plot on lease; they could not get sufficient grazing land. Consequently, all 19 children along with a few women of the families are cooped in the house for education, while the rest live 18 km away in a forest with 250 cows. Jalaji Chavan-Bharwad, leader of the clan, reminisces that 10 years ago the Nagpur Bench of the Mumbai High Court had ordered issuance of grazing permits to pastoralists. “But the forest department has refused to grant them. We now have no option but to bribe officials,” adds Jalaji. The Jogranas are facing a similar situation. “Our children go to school only during monsoons,” says Ramaji’s sister-in-law. “And we are forever shelling out money for bribes.”

One of the main reasons revenue and forest departments give to justify persecuting pastoralists is conflicts between the “outsiders” and farmers over alleged cases of animals grazing crops. Farmers, however, say the real cause is grazing rights. “If we graze our animals in the forest, the forest department calls it an offence but they allow pastoralists because they give bribes,” says a Lakhodi resident. Koili’s deputy sarpanch admits the Jogranas were denied access to the tank over grazing rights. Organic farmer Manoj Jaunjal of Katol town in Nagpur gives a more coherent picture. The forest department’s ambivalent attitude towards grazing is the root cause of conflict. Pastoralists readily offer bribes since they have ready-cash from milk sale and are vulnerable, says Jaunjal.

The two departments also claim that pastoral animals spread diseases among domestic and wild animals. The government resolution dwells at length on this danger, insisting on vaccination and quarantine. But the danger appears overrated. R C Bhaisare, assistant commissioner of Regional Disease Investigation Lab, Animal Husbandry Department in Nagpur, says there are no reported cases of epidemics caused by pastoralists’ animals. “They are invariably sturdy breeds. Vaccination too has never been an issue because pastoralists are very particular in this regard,” he says. Ghotge adds studies have found that pastoralists’ animals are healthier than stall-fed ones because of natural lifestyle and the pastoralists’ traditional knowledge of herbal medicine.

In recent years, policy support for pastoralism has come in the form of the Forest Rights Act, which recognises the rights of pastoralists, and the National Farmer Policy of 2007, which recognises pastoralists as farmers and recommends restoration of grazing and camping rights. However, in terms implementation no concrete steps have been taken.

Balkrishna Renke, former chairperson of the National Commission for Denotified, Nomadic and Semi-nomadic Tribes and author of the Renke Commission report, says: “The first thing to do is to recognise the significant contribution of pastoralists to rural and urban economy.” They are seen as poor and marginalised, but in fact they significantly contribute to the country’s total production of milk, wool, leather and farmyard manure, he adds. The commission report, presented to the prime minister in 2008, recommends special rights for the denotified, nomadic and semi-nomadic tribes.

According to estimates, pastoralists provide for 70 per cent of the milk in the market. They are also the single largest producers of farmyard manure. “Most importantly, they conserve good indigenous breeds. Despite this, the state has not bothered to conduct a census of this significant section which constitutes about seven per cent of the country’s population,” says Renke.

According to Ghotge, the tag of unproductiveness for pastoralists is unfair. “A significantly large part of the livestock economy depends on them,” he says. Desai says the image of pastoralists as helpless, useless and in need of protection needs to be changed. Pastoralist zones should be created where graziers can have secure grazing and camping rights. Indiscriminate arrest of pastoralists and confiscation of cattle should be prevented, suggests Desai.