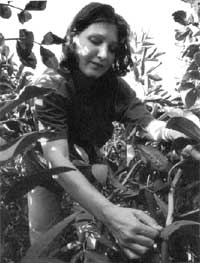 To put it in a nutshell, the factors that have contributed to the lack of development of organic market in India include low awareness about the perils of chemically farmed products, high prices of organic produce, lack of consumer confidence in organic food standards and their erratic supply.

Smritee Singh, nutrition manager of The Nature Store, an exclusive shop of organic products in Bangalore, says, "The lack of awareness among people is the main hurdle in selling organic products. Only the elite and foreigners ask for organic foods. There is also a great problem of sourcing. When an article about health issue and organic food appears, the next day we receive inquiries. But given the short memory of the people, business levels soon fall back to baseline levels." Points out Singh, "Only 25 per cent of the visitors make purchases, but they too leave complaining about higher prices."

Market surveys about the willingness of people to invest in organic produce can also be misleading as Yardi and Soree India (P) Limited, New Delhi, an organisation involved in marketing of organic produce found. Says Prabha Mahale, director of the organisation, "We did market research of three affluent colonies of Delhi and found that 30 per cent people were willing to buy organic produce. However, when we actually started selling, not even three per cent showed an alacrity to buy."

The government has taken no concrete step to encourage organic agriculture. There are neither subsidies for organic cultivators nor any incentives to practice organic cultivation. As yet, India has no legislation nor any mechanism to certify the products as organic. It was only recently that the Agricultural and Processed Export Development Authority (APEDA) prepared and released national standards for the organic produce. And though India announced the National Programme for Organic Production (NPOP) in March 2000 to promote organic agriculture export, progress on it would put even a snail to shame.

In June 2001, the Director General of Foreign Trade issued a notification declaring that export of an agricultural product as organic would be permitted only if it was produced, processed and packed under a valid organic certificate issued by a certifying agency duly accredited by either APEDA, coffee board, spices board or tea board. The notification expected to be operational from July 1, 2001 has been deferred till October 1, 2001 for reasons best known.

Like other government programmes, the NPOP has got bogged down in committees. T A Viswanathan organic agriculture consultant for APEDA informs, "A national level steering committee has been formed with representatives of ministries of agriculture, food processing, forests and environment, science and technology, rural development and commerce trade and exports for the development of the organic production. The steering committee has constituted a technical committee for preparation of accreditation policy and guideline for farm practices of different crops. As of now, all these details are ready for approval by the screening committee and implementation of the notification will start soon."

But Hay Soree, managing director, Yardi and Soree India (P) Limited has little expectation from the programme. "The idea has been mooted by the commerce ministry with an eye on exports only, not for promoting organic farming nor for the Indian people," says Soree.


To export organic products, the farmers need expensive and complicated certification done on their farms. Worse, the rules as to what constitutes organic are still being framed. The specific rules for organic agriculture are called standards which determine the production process within the ecological and social environment. The farms have to be certified by a recognised certifying agency, according to the standards.

The IFOAM, an umbrella organisation for promoting the movement worldwide, has provided basic standards on the basis of which a country can develop its own standards. The IFOAM tries to harmonise certification programmes through an accreditation system. IFOAM body International Organic Accreditation Service (IOAS) certifies farms.

Though the underlying concepts are the same, standards adopted by countries differ and should ideally be producer-based rather than buyer-based, as these currently are. Umesh Chandrashekhar, who heads the Institute of Marketecology (IMO) Control-India, Bangalore involved in organic certification says, "Certification, which verifies whether the practices are in accordance with the standards, must be based on the country which is producing organic products and not the country which is buying them, as is currently the case."

Alexender Daniel, director Indian Institute of Rural Development, Aurangabad, Maharashtra and general secretary IFOAM, Asia agrees. He says,"India has developed standards, but due to absence of any notification, this amounts to nothing. Indian farmers interested in exporting their produce have to run from pillar to post to get their farms certified from the international certifiers on standards based on the requirements of the buyer, not the producer. This goes against the basic principles of organic farming which are location-specific." Warns D N Reddy, director of Centre for Resource Education, Hyderabad, "International standards do not benefit our producers. We have to wake up if we want to safeguard the interests of our farmers."


Marketing is the main problem for organic produce. As a result almost every developing country has certified export surplus. "There is a mismatch between buyers and sellers," says Jha. The Codex Alimentarius standards guidelines state that organic food import requirements should be based on principles of transparency and equivalency. Although a regulation was issued to this effect in the EU in 1992, the reality is very different. According to the regulation, the EU should open the organic food market to products from third (non-EU) countries.This list is short and sweet: it includes Argentina, Australia, Israel, the Czech Republic, Hungary and Switzerland. In 1992, the EU Council Regulations introduced a case-by-case import permit procedure as an alternate way of gaining access to the EU market. Set up as a provisional measure to apply to every consignment imported from a non-listed third country, these countries find the procedure cumbersome.

"Apart from the procedural complexities, organic products from developing countries may also be subject to tariff and non-tariff obstacles," informs Jha. The solution lies in India getting itself included in the General System of Preference category to avail of the concessions provided by developed countries to developing countries for exporting their products and to seek a tariff quota system for organic produce, which means getting included in the third list of non-EU exporting countries.