Punjab farmers burn straw after harvest. It is time to exploit the potential of this agro-waste 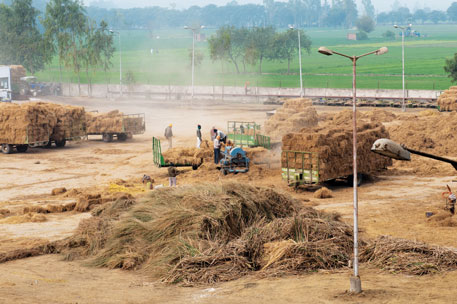 Plumes of smoke arising from the fields is a common sight in Punjab during rice harvesting season. In the months of October-November it almost asphyxiates anyone who ventures out of house, be it a village or city. Reason: paddy stubble burning.

Farmers in the state complain that rice straw is a huge problem for them because they follow mechanised agriculture. “When you harvest rice by a combine harvester, it leaves a significant length of straw on the field,” says Rajinder Kumar Sama, a farmer from Abohar district. So crop residues in combine-harvested fields are burnt. Besides, explains Sarabjit Singh from Ghanaour village in Patiala district, both wheat and rice are long-duration crops. With a short period available between rice harvesting and wheat plantation, burning is the easiest and quickest way to get rid of rice straw. Singh adds that increasing labour cost is another reason farmers prefer setting fire to their vast swathes of paddy fields after they have harvested the crop. 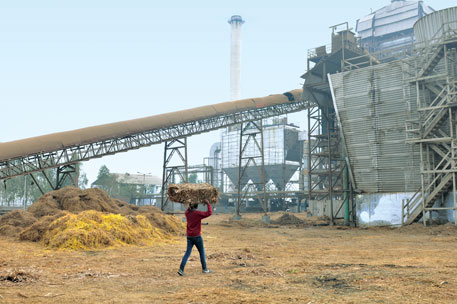 After China, India is the world’s largest producer of paddy. India produces 98 million tonnes of paddy with roughly 130 million tonnes of straw. Of this, about half is used as animal fodder. The rest is mostly burned in the fields, though a small amount is also consumed by brick kilns and paper and packaging industry. Despite such huge amou nts of rice straw generation, farmers in the country are yet to realise the potential of this agro-waste in terms of manure and as a profitable raw material for various industries.

Sama says on an average one gets about two tonnes of rice straw per acre (0.4 hectare). “The combine owner or operator charges an additional Rs 850 per acre for harvesting that leftover portion which is of no use to us,” says Sama. It cannot be even fed to the cattle. Blades of fodder cutter easily get blunt by the thick and sharp straw.

Sama adds that in his area only brick kilns buy rice straw, but they are limited. Besides, selling rice straw to kilns is not profitable. “They pay us Rs 600-Rs 700 a tonne, which means we get Rs 1,200-Rs 1,400 per acre. Now subtract Rs 850 rental cost of the combine harvester and transportation cost of Rs 300, which is borne by the farmer, from the amount. All we get is between Rs 50 and Rs 250. Where is the profit?”

Daljeet Singh, another farmer from Patiala says, “Of late, power companies are approaching us to buy rice straw. They are offering between Rs 500 and Rs 700 a tonne. Last year, the paper and packaging industry had bought straw for Rs 1,400-Rs 1,700 a tonne.” That was a one-off deal though. In the absence of assured returns, farmers find stubble burning an economic way of managing the agro-waste.

Every year about 12 million tonnes of rice straw is burned in Punjab. Accor ding to O P Rupela, former soil microbiologist at the International Crops Research Institute for the Semi-Arid Tropics (ICRISAT), this leads to nutrient loss from the soil which is equivalent to US $18 million worth of urea. Rupela, along with scientists from Punjab Agricultural University (PAU), has developed a simple and rapid composting technique to convert huge piles of rice straw into organically rich soil.

It takes about 45 days to prepare this rice straw compost which helps conserve nitrogen and other nutrients contained in the straw, he says.

The compost contains 1.7 to 2.1 per cent of nitrogen, 1.5 per cent phosphorous and 1.4 to 1.6 per cent potassium. It helps improve crop yield by 4 to 9 per cent. “But the problem was that farmers found it labour-intensive,” says the soil scientist.

A PAU scientist, who does not wish to be named, agrees with Rupela. “The problem with Punjab farmers is they want quick solutions. That is why the rice straw compost was not adopted in our state as well as in neighbouring Haryana.”

Rupela offers another use of rice straw—mulching. In this method, straw is spread across the soil surface and allowed to decompose naturally into the soil by the activity of worm and other organisms. “A few farmers in Punjab have adopted it. Farmers in Andhra Pradesh, another rice growing state, have also resorted to this method as it helps maintain soil fertility,” says Rupela, adding that crops like pigeon pea, soybean and maize are easily grown even with mulch on surface.

But environment-friendly agriculture asks for extra effort and time. With farming becoming less remunerative, farmers are looking for easy and quick solutions. This is perhaps the reason burning of rice straw continues unabated across Punjab despite advisories by agricultural universities and the district administration and FIRs by agriculture officers against erring farmers.

Power industry offers a way out

For the past two years, people in villages in the radius of 25 kilometres around Ghanaour village of Patiala are witnessing relief from choking air during harvesting seasons. Complaints of respiratory problems have also reduced. This is attributed to hundreds of farmers who decided to sell their rice straw to a power company, Punjab Biomass Power Ltd (PBPL) in Ghanaour. 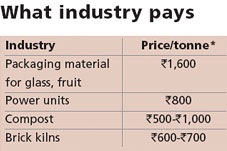 The company’s agents had approa ched the farmers to harvest the straw for a dividend in cash. The proposal was luring enough, but farmers had strict time constraints.

The company offered its own machinery to harvest and collect straw on time so that farmers do not get delayed for the next crop. Farmers agreed. Last year PBPL generated 12 MW while helping farmers reduce the pollution levels considerably (see box).

Power sector pundits say that energy demand may increase by 50 per cent by 2030 and, as Mehta says, power production from rice straw is a promising way to meet the demand. If enough biomass power plants are set up, it will provide a new source of income to farmers, he adds.

But the power industry pays less to farmers than the packaging industry. Mehta says paper and packaging industry needs straw in small amounts and hence are spoiling the market (see ‘What industry pays’). “Our straw requirement is 350 to 400 tonnes a day. We pay about Rs 900 a tonne for non-basmati rice straw and Rs 1,500 for basmati straw as it has high calorific value,” Mehta says, adding that prices may increase in the future as the market becomes competitive. Mehta hopes that PBPL, which is currently incurring losses, will be able to make profits in two to three years.

With several applications, increasing demand and competitive prices, it seems farmers have no dearth of options for managing the agro-waste in a profitable way. Howe ver, convincing them about economic viability of the options could be a challenge.

Rupela says farmers will give up burning rice straw only if they receive a lucrative incentive. For this he has a suggestion: policy makers can devise a plan to offer incentives to farmers to stop the polluting stubble burning and later credit the incentives through international carbon trading.