Not ready for swine flu

With over 600 deaths this season, experts say India needs more research on the H1N1 virus before it is in a position to combat the flu

Not ready for swine flu 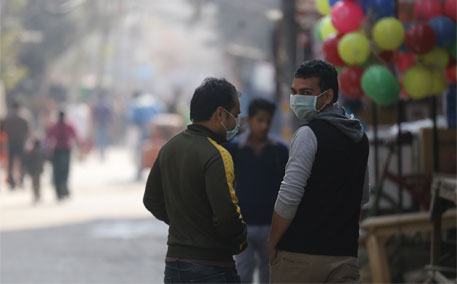 IN 2009, when swine flu hit the country for the first time health experts were clueless about the new virus. Within eight months it killed around 1,000 people. Five years later, India is still unprepared to combat the virus. In January alone, the virus has infected about 2,500 and killed more than 200 people.

Telangana, the first state where swine flu started to spread in early December last year, is the worst affected. Till February 5, at least 715 people in the state have contracted the infection and 34 succumbed to it. Rajasthan has reported 440 cases of infection and 68 deaths. Though the government is reluctant to call it a pandemic, the rise in the number of swine flu cases has created panic. Adding to that is lack of understanding of the virus and its spread.

Union health minister J P Nadda has deputed senior-level health teams to Telangana and Rajasthan to assess the situation and assist in managing the viral infection. The National Centre for Disease Control (ncdc) in Delhi has also enhanced surveillance for influenza-like illnesses and severe acute respiratory infections. It is providing laboratory support for testing and a 24x7 outbreak monitoring cell is attending to public queries on swine flu.

The reason for the high number of deaths in Rajasthan is lack of awareness. “Patients show up at a later stage when the disease is tough to manage. Even nurses and doctors are not well aware of how to treat swine flu in Rajasthan,” says Narendra Gupta, a Chittorgarh-based physician and convener of Jan Swasthya Abhiyan’s Rajasthan chapter. The state also has no approved laboratory and samples are sent to Vallabhbhai Patel Chest Institute (vpci) in Delhi. In contrast, Hyderabad, the worst affected district of Telangana, has two government-approved virology laboratories. 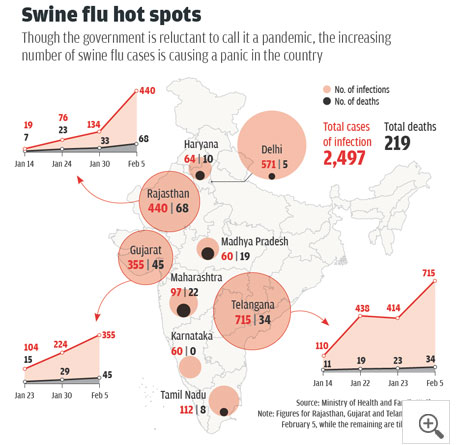 Telangana faced severe cold this winter. It saw its coldest day on December 20, 2014, when temperature dipped to 3.9oC in Adilabad district. Average temperature has remained lower than normal. From January 10 to 17, it hovered around 10oC in Hyderabad. This was the time when the district reported nearly 40 per cent of its swine flu cases.

Studies conducted since 2009 show that H1N1 virus, which causes the flu, peaks in the winter and rainy seasons in different parts of India. A study published in September 2013 in journal PLoS Current Outbreaks shows that in Kashmir, maximum cases were recorded in the winter season between December and March. The study observed re-emergence of the H1N1 virus strain of 2009 in 2012-13. It noted that all types of influenza, H1N1-type A and B, and seasonal H2N3 peaked in winter between 2010 and 2013.

Another study conducted in and around Lucknow, found no significant association between swine flu and temperature. But the study by King George’s Medical University, Lucknow, and the National Institute of Virology in Pune found a significant correlation with rainfall and humidity.

“Temperature plays an important role. Rainfall brings down temperature. At the same time, winters are also not only about low temperature. There is precipitation in the form of snow or rain,” says Parvaiz Koul, head, department of general medicine at Sher-i-Kashmir Institute of Medical Sciences, and co-author of the Kashmir study. He adds that there is also an inverse relationship between swine flu and atmospheric pressure. “When all such climatic conditions combine, swine flu and other forms of influenza virus proliferate and spread,” Koul says.

Randeep Guleria, head of department of pulmonary medicine and sleep disorders at aiims, says swine flu spreads in winters for two reasons. “Firstly, the virus stays in the environment for a longer period. Secondly, people tend to crowd together, especially those from the lower economic strata. So even if one person is infected, it affects everyone around.”

Vaccination a bottleneck
Though a vaccine is available for tswine flu, there is little clarity over the right time to administer them. An October 2014 study, published in Emerging Infectious Disease, suggests vaccination timing in India should be different for different regions. “Influenza peaks in Delhi in July-September, while it peaks in January-March in Srinagar. Thus, Srinagar should consider vaccination in October-November, but Delhi should vaccinate in May-June,” says Koul.

Experts are also unsure about who all should receive the vaccines. “Our policy for vaccination is still evolving. Each dose costs `500 and has to be administered every year. In such a case, only vulnerable groups should be vaccinated,” Guleria says. According to the who, vulnerable groups include children, the elderly, pregnant women and people with chronic diseases. Prasad says the main problem is non-availability of vaccines for developing nations. “Almost 95 per cent of the vaccine is utilised by the developed world. The rest is not enough for developing countries.”