Are the recent accidents at the Tarapur nuclear facility early warnings of a catastrophe in the making? 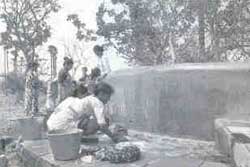 DOES "Ghivali" sound familiar any longer? Hardly? The tragic truth is that people are already starting to forget that this semi-pucca village, sitting rather uneasily just 1.23 km from the barely-year-old-but-already cranky nuclear waste immobilisation plant at Tarapur, had only recently seen 30 cattleheads die due to a nuclear leak.

A bit of worse luck, and Ghivali would have gone down in nuclear history as an anthropogenic disaster. In the 1st week of March, the cows and buffaloes died of what the authorities first said was an un-named toxin. But it was later clearly established that the facility's pipelines were leaking into a nullah that quenched the cattle's thirst.

After a remarkably muted and shortlived protest, the village (population: about 3,000) has reverted to its original state in summer: a stupor. The skeletons of the cattle now mount guard over their living relatives, as they munch placidly at the scanty grass. Too close for human comfort is the well that gave the warning of contamination later in June. In the middle of a debilitating summer, the water in this well had shot up like a geyser, while the other wells in the vicinity slopped hit near rock bottom. Evidently, something was leaking into that dangerous well, probably discharges from the nuclear plant itself. But since water is too precious a commodity, caution took a beating, and the usual washing and drinking is on, as usual.

This return to calm is deceptive. Tarapur has a history of both hysterical and paralysed reactions to accidents, and virtually no concrete follow-ups. As early as 1974, the National Workshop on Siting and Safety of Nuclear Power Plants mentioned a major accident at the Tarapur Atomic Plant which had killed 2 engineers instantly, while the chief engineer agonised to his death over 3 years. Then, In 1979, a massive leak of radioactive water exposed 300 workers to much more than permissible levels of radiation -- 1 millirem per hour per person.

However, no one is certain about the exact time lag between the leak starting and its detection. The exhausting daily routine of the villagers cloaks low-level radiation and its slinky after-effects. Unlike the workers at the plant, who are constantly being monitored by the Bhabha Atomic Research Centre's health physics division, the villagers complain that they have not been extended any medical facilities. Cattle-herders meander dangerously close to the plant -- as close as 300 m from the buildings, where the radiation is much above the 0.05 millirem per hour, the highest permissible standard for non-radiation workers set by the International Commission on Radiation Protection. Further, says health physicist S P Lochab, "Even within this limit there are significant chances of radiation-induced illness being contracted."

No one is 100 per cent safe when it comes to the nuclear industry. But basic security provisions are being given the bye here. The international safety boundary between a nuclear power plant and any human habitat is 1.6 km from a nuclear power plant. This is clearly being violated. Officials explain this away by twisting the logic: though Ghivali is less than 1.23 km from the waste immobilisation plant, it is 1.8 km away from the Tarapur Atomic Power Station (TAPS).
The attempt is clearly to deny the charges on the basis of a minor technical difference. According to A Gopalkrishnan, chairperson of the Atomic Energy Regulatory Board (aerb) , all nuclear power plants in India are facing encroachments within the 1.6 km exclusion zone. In Tarapur, the villagers have resisted all attempts to keep them out of the exclusion zones which, ever since barc took over part of the village land, contains most of their wells.

Yet, the villagers have not reconciled themselves to living practically on the top of a radiating pile. Each one of them has heard of Chernobyl, and have little faith in the plant's authorities. The authorities largely discount their complaints of various ailments (muscular pains among children and elderly persons, who tend the cattle within the exclusion zone, is the most frequent complaint), as the hypochondriacal fears of semi-literate and panicking villagers. The radioactive spill, they explain, is too recent, and too low, to show such immediate effects on the populace, human or otherwise. But radiation can result in severe long-term effects. It damages the chromosomes, which, in women, can lead to abnormal childbirths or disabled children. However, the genetic damage may not necessarily appear in the first generation, but could surface in the unborn generations. The most frightening of the genetic hazards of radiation is that its effects, though initially invisible, are irreversible.

Many of the village's over 3,000 inhabitants now actually want to leave. "I want to leave before it is too late," says Manubhau Atrekar, 29. The original demand of the villagers was to be relocated, but that seems to be an impossibility. While the rehabilitation is under consideration by the state government, the demand of the villagers for land is unlikely to be met, as the government says that only displacement victims of irrigation projects are entitled to compensation in the form of land.

However, relocation is probably the only solution for the village in the light of the series of accidents that have occured at Tarapur. Many more are likely, if one keeps in mind the sordid fact the first ever leakage from the immobilisation plant took place less than 1 year after it started operating. The plant was set up in June 1994 to treat the large amount of radioactive water from the barc. The radioactive waste is concentrated here and the remaining water allowed to drain out.


A major design flaw in the plant is that the drainage pipe is directly linked to the storm water drains, without being collected and checked before release. The leaked radioactivity, according to the official version, is about 20-30 millicuries (one curie of Cesium-137 would emit 0.33 rem per hour), and is thought to have occured during the treatment of the last 2 of the 15 batches of liquid waste treated since the plant first opened.

The Cesium-137 that had leaked out into the village, is a dangerous radioactive isotope, with a halflife of 30 years. If it contaminates a water body, as it did in Ghivali, it can enter the food chain either through domestic water resources, agricultural produce or through marine life.

In December 1991, a serious radioactive leakage had occurred at Cirus, a research reactor of the Bhabha Atomic Research Centre on the outskirts of Bombay, barely 3 kms from the heavily populated suburb of Chembur. Sources say that because of ill maintained underground pipelines the leakages had been going on for at least 14 years. They speak of excessively high levels of Cesium-137 activity found in the soil and water samples taken from within the plant site.

In 1992, the barc conducted tests on marine organisms taken from the sea behind the plant site. One of the crab samples for instance, contained as high as 500 milli becquerel gram (bq/gm is a unit of radioactivity). Ominous, as the fishing communities along the coastline have these as their staple diet. Once Cesium enters the human body, it is absorbed by the cells and can lead to cancer, miscarriages, birth deformities and low sperm count.

Gopalkrishnan admits that the Cesium spill at Ghivali had been sought to be rectified by using vermiculide, which is a natural clay that binds Cesium-137 in the soil to prevent the spread of the radioactivity in it. Over 3.5 tonnes of contaminated topsoil has been removed and stored in plastic bags. But these precautionary measures taken by the authorities have done little to allay the fears of the villagers.

However, the apprehensions of the villagers are not being taken seriously by the powers that be, or even by those sympathetic to their cause. The villagers get little information from barc as to what is happening in their neighbourhood nuclear plant, as the entire project falls under the purview of the Official Secrets Act 1923. The plant has the capacity to make weapons grade plutonium, says a nuclear expert in New Delhi, requesting anonymity. Which explains the silence over the details of the plant and the stonewalling of the villagers' right to information.

But this also stands in the way of safe operations, as its history shows. According to Gopalkrishnan, "What people know about it is only the tip of the iceberg. The barc annual report tells the real truth."

Interestingly, Chernobyl too was preceeded by a series of minor accidents and safety lapses, which were not taken as the warnings of the disaster that was lurking not far away. As the old adage goes, those who do not learn from history are condemned to repeat it. The villagers near the Tarapur nuclear plant would be the first to appreciate that, for if the current veil of secrecy is not lifted to ensure security, the village of Ghivali may in due time become a nuclear Mohenjo Daro.