In Wayanad, Kerala, wild plants hold the key to the survival of the poorest, say n anil kumar and m k ratheesh narayanan 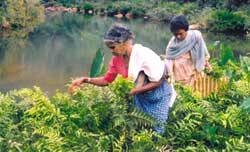 Nestled among the mountains of the Western Ghats is Wayanad district, Kerala. Well known for cash crops such as coffee, tea, pepper and cardamom, this district is also redolent with a variety of flora. In fact, its rich plant wealth has given Wayanad the sobriquet, 'green paradise'. But Wayanad's greenery is much more than aesthetic delight. It's subsistence for the district's tribal communities: Karumas, Paniyas, Kattunaikkas and many others.

These tribals make regular forays into the forests of Western Ghats, and scan areas close to plantations, for wild food -- all plant and animal resources outside agricultural areas that are harvested for human consumption.

Wild leaves are among the most widely consumed. Most of these plants sprout after the rains and are locally classified as 'weeds'. But that takes nothing from their utility. They are used in soups, stews and relishes that add flavour to staples. A study by scientists of the Chennai, Tamil Nadu-based M S Swaminathan Research Foundation (mssrf) has identified 101 edible greens in the forests of Wayanad. Not all of them are consumed regularly.

The Paniyas consume about 83 species, the Kattunaikkas 43 and the Karumas about 21 types of wild leaf species. Varieties of a maranths are eaten quite frequently, so are other wild leaves such as ponnamkanni (Alternanthera sessilis). People of the Kattunaikka community are regular consumers of another wild plant, the maracheera (Embelia tsjeriam-cottam).

Besides these, numerous other wild greens are eaten less frequently: about two or three times a month (see box: Tap the wild). While some of these leaves are high in fat, others are rich in proteins; most of them are good sources of vitamins and minerals.

But the tribals of Wayanad do not just value the wild plants for their leaves. The mssrf study found that communities in the region use 55 varieties of fruits. Even wild flowers and corms make their way to their Wayanad tribals' platter. For example, the Kattunaikkas use corms of different kattuchena species (Amorphophallus spp). Eaten raw, these corms are surely to cause a terrible itching sensation in one's throat. But the Kattunaikka women take the bite of the kattuchena corms by washing them several times in fresh water and then boiling them in tamarind water. Likewise, the tender petioles of the karimthalu (Colocasia esculenta) are harvested before the leaves unfold. They are then peeled, boiled in tamarind water and again smeared with turmeric paste for a while to remove their irritable properties. These are among the several methods devised in the kitchens of the Wayanad tribals to make wild plants palatable.


But let's take leave of the kitchens now, and accompany the tribals as they burrow the soil for roots and tubers. More than 25 wild plant species are used for their edible roots, tubers and rhizomes. Of these, 19 are of varieties of yam (dioscorea). The tuber has rightly earned the epithet of "life saver" from Wayanad's tribal communities: wild dioscorea species are the mainstay of the diets of these communities during times of food scarcity. The Kattunaikkas are particularly dependent on them. People of this community call these tubers kalasu and they know of 21 kalasus. Nallanoora (Dioscorea var.pentaphylla, safe mushroom in the local language) is the most commonly consumed.

The mssrf study found that seeds of 7 plant varieties are used. The Paniyas are the largest consumer of bamboo seeds. At the onset of the bamboo flowering season, Paniya villages are abuzz with women preparing to collect bamboo seeds. They go to the bamboo plantations before the fruit ripens, clear the undergrowth under the trees and prepare a clean bed for the seeds to fall. Sometimes, the ground beneath large bamboo canopies is even smeared with cow dung. The collection goes on for many days and very often the entire Paniya family keeps vigil amidst bamboo plantations.

The collected grains are carefully stored for future use, the popular belief that droughts usually follow bamboo flowering gives urgency to this practice. The Paniyas use bamboo seeds in a variety of recipes, including their staple gruel and the extremely popular steamed pancake, puttu.

Considered highly nutritious, bamboo seeds are also much sought after by non-tribal communities.


Another very nutritious item in the Wayanad tribals' diet is mushrooms. The communities have knowledge of around 35 different wild varieties. Almost all are good sources of protein, vitamins and minerals.

The fungi are commonly found in open areas in plantations, forest edges, alongside forest paths, inside bamboo brakes, fallow fields, on termite mounts and riversides. Tree trunks and on decaying wood in forests and plantations also host these fungi.

The Kattunaikkas are voracious mushroom consumers. The community knows 33 mushroom varieties. They consider mushrooms growing on huthus (termite mounts) to be non-toxic. Children of this community are often seen munching on mushrooms that grow on termite mounts.

Mushrooms also find a pride of place in the Paniya platter. The community has knowledge of 25 mushroom varieties and classifies the fungi into two groups: marakkumman (those that are seen on trees) and mannukkumman (those that grow on soil).

The Karumas have a different method of using mushrooms. The women of these communities dry and preserve the mushrooms for future use. These can be stored till the next season without losing any of their qualities.


This is another major constituent of the diets of Wayanad tribals. The Kattunaikka are also known as Jenukkurumba because of their exceptional skills in collecting Jen (the Kattunaikka word for honey).

The Jenukkurumbas are experts in inducing small bees of the melipona species to hive in bamboo stems, to get an almost captive supply of the delicious cherujen -- a variety of honey that is most difficult to extract and believed to possess excellent nutritional and medicinal attributes.

In the past, tribal communities consumed a great deal of honey and it was an important source of nutrients for them. Today, there is a huge demand for honey in the market and the tribals sell off their entire honey stocks. Their honey consumption has drastically reduced with telling effects on health and nutritional security.


Crabs are another wild food consumed by the Wayanad tribals. The Paniyas collect five varieties of these creatures regularly. The community also has knowledge of 35 different varieties fish. Though fish is available irrespective of season, the Paniyas prefer the summer months as reduced water levels in the streams makes the catch easy.

The entire Paniya family takes part in the activity. While the men folk go about casting their nets, the Paniya women spread a paste of Hydrocotyl javanica in water bodies. The paste stupefies the fish making the catch easy. The Paniyas claim that the paste does not kill the fish or harm other riverine creatures.

The Paniyas also harvested a big fish called malanjil. But that was in the past. The fish has now become very rare, say people of this community. They attribute the disappearance of this species to the chemical pollution of streams from the pesticides sprayed in the plantations.


Most wild food is collected from outside the forests: from paddy fields and its fringes and bunds, wayside bushes, agricultural or unmanaged or semi-managed disturbed habitats. These areas are vulnerable to the onslaught of a host of developmental activity, and changes in land use patterns. Today, there is a serious lack of commitment in conserving these habitats.

Moreover, aggressive alien invasive species have displaced a large number of wild greens. Chemical weedicides, which have been applied to remove these aggressive exotics from plantations, have further endangered the remaining indigenous greens.

The larger society has very little knowledge that wild foods are cheap and nutritionally very rich. Serious thought should be given to preserving such foods when formulating strategies for rural food security. The emphasis on wild food plants will also help maintain biodiversity.