Of large carnivores and humans

How does a civilisation relate to the environment? To find out, study its attitude towards large carnivores. Europeans have tried to dominate nature. In the process, they have exterminated several large carnivores like the wolf. But communities in India have lived with nature for centuries. They hold nature -- and its most resplendent symbol, the tiger -- in high regard

Of large carnivores and humans 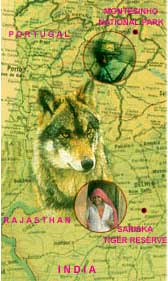 each civilisation has a different attitude towards nature and wildlife. And one of the best indicators of how a culture relates to the environment is its attitude towards large carnivores, who are not only an important factor in maintaining the ecological equilibrium but also a source of potential conflicts and danger to people and cattle. The relationships of the Europeans with wolves and their counterparts in India with tigers provide a good picture of these concepts.
In Europe, people have tried to destroy the wolf since the Middle Ages. In many countries, such as England, France and Germany, wolves have been exterminated completely. The European colonies in the Americas continued this war, killing millions of wolves in a short period. Even in other Western countries, such as Portugal, Spain and Italy, wolves have been persecuted, their number reduced to near extinction. But the species has survived.

One of the few places in western Europe where wolves still survive is the Montesinho Natural Park in north-eastern Portugal. It is a hilly area of about 750 sq km with a Mediterranean climate. Forests and scrubs cover more than 50 per cent of the area, the rest being agricultural land. Over the centuries, people have destroyed native forests, cut trees for wood and burnt the scrubs to make provisory pastures. About 30 wolves still howl here, preying mainly on wild boar, roe deer, red deer and domestic sheep and goats.

These wolves are not isolated, as their population is in contact with neighbouring ones in Spain and other areas around the park, shaping the biggest wolf population in western Europe.

About 8,000 people live in 92 little villages inside the park. In these villages, the human population is decreasing. In village Varge, about 50 per cent of the people have migrated. Almost all villagers are farmers and shepherds. Each family owns an average of 15 hectares of land, mostly comprising small, irrigated fields near the village and larger dry fields, pastures and forest. The main commercial crops are cereals and chestnuts. The shepherds, one or two in every village, graze about 250 sheep each and some goats. The average income per family is us $500 per month.

The villagers have a very limited knowledge about wolves and many have strange beliefs. Some believe that wolves have poisonous fangs, while others feel that wolves do not prey on wild boar, that the boar is in fact stronger than the former and they kill and eat wolf cubs. They have an inverted image of the ecological pyramid, placing the wild boar at the very top.

When the villagers come across wolves, they try to scare them away, set their dogs after them or light fires. Due to centuries of persecution, the wolves have developed a strong fear of humans. Most of the contacts between villagers and wolves occur when wolves attack domestic herds. But these are relatively rare. In fact, in the Varge village, wolves kill less than 0.1 per cent of the livestock each year. They also prey on dogs, and sometimes enter the villages to hunt them. But these cases are rare. During the past few decades, the attacks on livestock have decreased as the number of wild herbivores has increased. The park, however, pays good indemnities for the loss of livestock. As for people, wolves have not attacked any person in the region this century.

When a sheep or a person is lost on the hills, the villagers utter the responsos , special and secret prayers to Saint Antonio, in order to give them supernatural protection. Some carry the Bible when they walk alone on the hills at night. Once a year the priest blesses the livestock to protect it against infirmities and wolf attacks. In the past, people believed in the existence of werewolves. According to legend, certain people could acquire a wolf's appearance, attacking and terrifying people. The wolf used to symbolise evil all over Europe. In some regions, it still does. The villagers near the natural park even resorted to poisoning entire wolf packs.

However, not everyone is against these creatures. There are still a few people living in the park who consider wolves useful and that they need to be protected. According to them wolves control populations of wild herbivores, such as the wild boar that destroy the crops. Ironically, this is the main reason why many think that wolves should be exterminated.

To ensure the survival of the wolf and other wild animals, an environmental education campaign is needed in the region. The rural people believe nature is a force that must be dominated, eradicating all the wild animals that cause damage. This attitude was typical among the Europeans until recent years, and was supported by the Catholic Church, politicians and intellectuals, and the fallout of this thinking is evident in the destruction of fauna and ecosystems in Europe and countries that were colonised by Europeans.
On the other side of the world, in the Sariska Tiger Reserve in the western Indian state of Rajasthan, villagers have a completely different attitude towards large carnivores. Within the 800 sq km reserve, about 10-20 tigers, a few panthers and thousands of large herbivores, such as nilgai , sambar and wild boar, coexist with 16 little villages. Most of this hilly area is covered by dry deciduous forest and the climate is dry tropical.

In villages like Haripura, about 150 people of the Gujjar community live in 21 families. Their houses are made of indigenous materials. There is no electricity, running water or toilets in these villages. For vehicles, they have only bicycles. More than 70 per cent of them are illiterate. Each family grazes buffaloes for their milk. Most families have a monthly income of about Rs 2,000-4,000 ( us $65-130), mostly from selling milk. They are humble but not miserable. Being lacto-vegetarians, milk and purchased cereals and vegetables form their basic food. They also pick wild grain and fruit, such as ber , mostly for self-consumption. They consume small quantities of firewood -- around 10 kg per day per family -- preferring dead branches gathered from the forest. The only form of protection for the villagers and their livestock is fences of thorny branches.

Buffaloes share the natural pastures with wild herbivores, and the villagers believe that such association is not competitive. According to them, grazing by wild herbivores and buffaloes is essential for maintenance of the vegetation equilibrium. The villagers also feel wild herbivores act as a buffer against cattle-lifting by predators. They understand the role of large carnivores in the environment. "If there were no tigers nor panthers, there would be too many sambar and nilgai and so one day there would be no grass nor trees; there would be no forest," they say. The villagers are careful and silent in the jungle and never interpose themselves between a tiger and its prey, even if it is a buffalo. In the past 14 years only one person -- an outsider who ignored the rules -- was killed by a tiger in the reserve. Cases of people wounded by tigers are also very rare. But, as the villagers say, "if you live here, you must accept the risks."

Their respect for tigers also assumes mystical forms. As Hindus, they believe that each animal has a soul that must be respected. They also believe that the tiger is the vehicle of the goddess Durga, who keeps the world's order by fighting against demons. At the temples in Haripura, villagers have an altar with a sculpture of a tiger head, which they worship.

Due to this mix of sharp empirical knowledge of ecology and technical, mystical and aesthetic attitudes, the villagers have developed a healthy respect for wildlife. In villages like Haripura, all the residents think that tigers must not be harmed and respected. Instead of trying to completely dominate and domesticate their environment, they have adapted their society and production systems to it, integrating themselves successfully with the high biodiversity of the region -- even with its large carnivores -- and preserving it. Many traditional Indian societies had similar relationships with the environment in the past. Things began to change during colonial times when the British and the upper classes killed thousands of tigers.

However, external factors can destroy the humanised ecosystem of the tiger reserve. A highway crosses the reserve and the intense vehicular traffic disturbs wildlife and often animals are killed. Theoretically, the best solution would be to restore large areas around the reserve through reforestation. Inside the reserve, ecodevelopment programmes are needed to improve economic conditions of the villagers. Such actions could ensure the tiger's survival in the long run.

But some researchers and officials, Indian and foreigners, think otherwise. As a short-term solution, they have proposed the relocation of some villages in the reserve, which is always a traumatic and uncertain experience for the people. Such plans can provide some additional space for the tigers. But as the villagers have little impact on the environment, they will not substantially change the conditions for its survival. The death of the villagers' "tiger cultures" -- rich references for planning of ecodevelopment strategies and for anthropological research -- may just precede the extinction of the tiger.

The author is an agricultural engineer and a research student from Porto in Portugal, and is now based in Madrid, Spain.