Of plants and bees

Of plants and bees 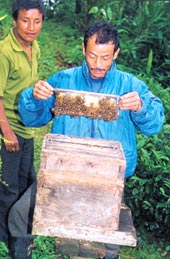 Of late, even the largest honey-producing habitat in the Indian sub-continent -- the Sunderbans region of West Bengal -- hasn't exactly been swarming with honeybees. Apiaries, too, are on the verge of a takeover by an exotic European variety. Clearly, the writing is on the wall for indigenous honeybee species across the country. And the weakening of this link is likely to impact the entire ecological chain.

This is because local honeybees are considered to be highly effective pollinators. In fact, cross-pollination by these insects is one of the most economical methods of enhancing crop yield (by as much as 5-25 per cent). Scientists from the Nepal-based International Centre for Integrated Mountain Development (icimod) contend that since local species are better adapted to the extreme climatic, biological and agricultural conditions that exist at higher altitudes, they play a vital role in the pollination of crops as also wild flora grown in hilly areas. This is, however, not the case with migrant honeybees as they are unable to adjust to their new environment. R C Mishra, executive director in the Delhi-based National Bee Board, doesn't subscribe to the 'alien threat' theory. But he concedes that native varieties visit more plants than foreign species.
In India, four types of honeybees are commonly found: the indigenous Apis cerana, Apis florea and Apis dorsata varieties, and Italian species Apis mellifera . Though efforts have been on to introduce the latter since the 1880s, the exotic strain established itself in the apiaries of Himachal Pradesh and Punjab in 1993-94. This was after more than 95 per cent of the indigenous Apis cerana variety was wiped out by the Thai sac brood virus (tsbv) over a period of nearly two decades.

The virus strain was first reported in Thailand in 1976. The disease then spread to India via Malaysia and Myanmar. It reached Bihar by 1979 and has been particularly virulent in the southern and northeastern parts of the country. "The initial outbreak was devastating to Apis cerana , " says apiculturist Naomi M Saville. The tsbv-resistant Apis mellifera thus began to gradually replace the indigenous variety. In Himachal Pradesh alone, there were 20,000 colonies of the exotic bee as against only 4500 of Apis cerana in 2000. The introduced species was a success among breeders not only because it showed immunity to tsbv, but also due to its higher yield of honey.

But mellifera requires migration, intensive management practices, standardised equipment and large foraging ground with monoculture-based agriculture. In this context, icimod researchers have voiced their concern over the deep inroads made by the exotic variety at the cost of the local one. They warn that the move could affect the livelihood of farmers in the Himalayan region, since the foreign variety is a profitable proposition only if operations are conducted on a large scale. Small agriculturists -- the custodians of biodiversity -- are, in the process, left out of the loop.

Lalit K Raina, a professional beekeeper of Jammu who has been in this trade for the past two decades, explodes some myths: "From the commercial point of view, Apis cerana works better than Apis mellifera as a honey gatherer from Plectranthus rugosus -- the variety of honey we have been promoting in the domestic market. It also proves superior at higher altitudes (see table: How they stack up )."

Moreover, the once-dreaded tsbv nowadays has a less deleterious effect on indigenous bees. In fact, experts have observed the emergence and spread of resistant cerana populations within two decades. The European foul brood disease (efb) is currently considered a more potent menace. It is ironical that this was almost certainly spread through Apis mellifera in the early 1990s, points out Saville. Worse still, efb can affect the wild Apis dorsata too.

Mishra, however, feels there is little chance of Apis mellifera eliminating the local varieties. For one, he states in an Indian Council of Agricultural Research report that the species do not share the same niche. While Apis florea inhabits the warmer plains of the north, it is not present in the hills. Apis dorsata migrates between plains and hills up to an altitude of about 1500 metres. Apis mellifera , he points out, was introduced in Punjab, Gujarat and Rajasthan, where Apis cerana cannot thrive in the harsh summers. He cites another factor to buttress his argument: the flower preferences of the different species vary.

Notwithstanding these contentions, doubts continue to linger about the impact of Apis mellifera on local varieties of domestic as well as wild bees. Indeed, there are other reasons, too, for the fall in numbers of the latter.


As much as a 20 per cent decline has been reported in the population of the wild Apis dorsata over the past 10 years, according to B G Srivastava, former head of entomology, Indian Agriculture Research Institute (iari). Honey production from the wild dipped from 27,000 tonnes in 1991-92 to 18,000 tonnes in 1994-95. These figures are all the more alarming since wild varieties of bees account for around three times the honey produced by apiaries, as per a report of the Khadi and Village Industries Commission which falls under the Union ministry of small-scale industries and agro and rural industries.

Apart from the preference for the exotic variety, drastic changes in habitat have also affected wild bees. The sharp decrease in trees has literally driven them up the wall, forcing them to dwell atop tall buildings in cities, says Mishra.

Experts from agricultural universities point out that the dwindling colonies of wild bees pose a serious threat to the country's biodiversity. "Since wild varieties cannot be domesticated, we need to take other measures to improve their numbers," says Srivastava. He reveals that up to 98 per cent of wild honey is extracted by employing a crude method, wherein the entire honeycomb is milked dry after the bees have been smoked out. This method does not just destroy the hive and the colony, it also kills bees.

Misty conditions in north India during winters have resulted in a plunge in the population of Apis dorsata , avers A Nath, head of the entomology and apiculture department, University of Horticulture and Forestry, Solan, Himachal Pradesh. The severe drought this year has taken its toll on bees in Haryana, he adds. Agriculture University, Hissar, scientist S K Sharma attributes the trend to the absence of forage yielding plants.

Other reasons for the decrease in pollinator population of rock or wild bees could be forest fires, population pressure on land and also harassment of traditional honey gatherers by the forest department, says Nath and adds: "There are no defined areas where hunters can cultivate bees."

Pests striking wild hives are another major problem. Here, too, Apis mellifera is to blame (at least partially). Though Tropilaelaps clareae is a parasite of Apis dorsata , yet it has found breeding grounds in the swarms of Apis mellifera . Stationary colonies of mellifera in the nesting areas of dorsata keep inoculating them, even as migratory colonies of the foreign species spread the mite.

Then there is Varroa jocobsoni -- an ectoparasitic mite. It has been reported to cause 57.2 per cent loss in pollen collection, 46.3 per cent shortfall in brood rearing and 66.7 per cent deficit in honey yield.

Indiscriminate use of insecticides and pesticides during the bloom period also kills bees. This has proved an impediment for several orchard owners in Himachal Pradesh using domesticated bees for pollination in place of natural pollinators.
Scientists suggest a holistic route to revive the flagging indigenous honeybee population.

• Awareness about the need to protect beehives from insecticide spraying is another area that needs to be focused on, points out Nath. Timing the sprays -- determining "safe hours" which would not overlap foraging hours -- is crucial

• The beekeeping industry has been destabilised by tsbv. Timely diagnosis and treatment are essential to minimise the adverse effect of such diseases

• Some colonies of Apis cerana have escaped tsbv. They can be used to multiply the local stock, says Mishra

Participants at the Asian Apiculture Association Conference, held a few months back in Bangalore, were unanimous in recognising the significance of protecting indigenous species. "We have a potential of 73 million colonies as against the current six million," the experts stated. These observations should be acted on to ensure that apiaries as well as forests are buzzing with local honeybee varieties again.