The Indian government comes out with the draft rules for recycling lead acid batteries. Their effectiveness is questionable 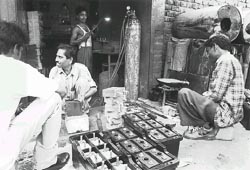 it takes two giant leaps to have an effective law. One leap to legislate. Another to enforce. In the case of regulating recycling of lead acid batteries, India has taken the first step. The government, on May 25, 2000, notified the draft of the Battery (Management and Handling) Rules under the Environment Protection Act of 1986. In a month, claims the government, the rules will be enforced.

Why such concern about the recycling industry? Because lead poisoning can have adverse, even lethal, consequences (see box: Leading a leaded life ).
The rules fix up responsibilities for manufacturers, importers, assemblers, re-conditioners and consumers of lead acid batteries. Under the rules, it will be the responsibility of each of them, barring the consumer, to ensure that the number of used batteries collected is equal to the number of new batteries sold. They will be required to file returns, set up collection centres and ensure that collected batteries are sent to authorised recyclers, only in absence of an in-house facility. They will also have to ensure that no damage to the environment occurs during transportation and reprocessing. Each recycler will have to register with the ministry of environment and forests ( mef) to legally reprocess batteries. The batteries thus collected will be recycled only by the units that have the requisite environmentally sound managed ( esm ) plants. It will be the responsibility of mef to inspect such plants.

The lead recovered from reprocessing will have to be labelled 'recycled'. The consumer will have to ensure that batteries are deposited with the dealer, importer, assembler or an authorised recycler at the designated collection centres.

Even auctioning of batteries has been covered under the rules. The auctioneer would have to ensure that the used batteries are sold only to the authorised recyclers and a record of the same will be maintained and made available to the state pollution control boards ( spcb s).

In short, once the rules are enforced the illegal smelting units will have to either fall in line, get the esm certificate or close shop. The onus will shift on to such smelting units to get themselves approved.
Out of the total lead consumption in India 70 per cent is used for batteries and a colossal 60,000 metric tonnes of the lead in the market is recycled illegally. The illegal units run in deplorable conditions and are a threat to public health. In 1994, Central Pollution Control Board ( cpcb ) closed 110 backyard smelters in Delhi for polluting.

There has been a long-standing demand for the rules in the country for regulation of this market. "Our organisation has been campaigning for proper collection and disposal of lead batteries since 1995," says Ravi Agarwal, coordinator of New Delhi-based Srishti.

It took two prior expert committees and the present core group, head by a joint secretary of mef, set up in 1999, for the government to come up with the proposed set of rules.


Assuming the finalised set of rules is notified, without much delay, what happens next? Do they fall into the abyss of Indian legal system?

Ministry sources are sure that the rules will be effective. "I am quite happy with the rules and feel they will solve the problem of illegal lead smelting in the country to a large extent," exults Indrani Chandreshekharan, additional director, Hazardous Waste Management Division of mef .

Experts differ. While some have not even been able to lay their hands on a copy of the draft rules, others voice their doubts. "The government has of late approved a few units following esm practices, though we doubt such certification," says one of the experts.

There are officials, as well, who are unaware. "I have not received a copy of the rules, so cannot comment," says Lalit Kapoor, senior environment engineer with cpcb . Ironic, considering cpcb has to play an important role in implementing the rules through various spcb s.

And to add to schemozzle are some who pass on information reluctantly. "We will not look into the monitoring aspect of the rules per se. spcb s have to do that. Although it is not very clear in the rules, it is implied that cpcb will also have to monitor and implement the rules," says a official at cpcb .

Regulations not very different from the Battery (Management and Handling) Rules 2000, exist in other countries like France, Belgium, Japan and Denmark and have been able to improve upon recycling processes (see box: Others show the way ). What remains to be seen is how effective will they be of in India.

Notifying the rules is easy. Ensuring they are followed, on the streets, in the backyards where smelting is actually done, is another ballgame altogether. Monitoring is the key here. As of today, innumerable illegal smelting units exist. Checking and monitoring them, ensuring adherance to the rules will be a a Herculean task for the authorities.

And let us assume monitoring does take place, the illegal smelting units are taken care of and all the used batteries come to the registered recycling units, would the formal sector have sufficient infrastructure to handle large amounts of lead waste? All of the 60,000 metric tonnes which is currently smelted illegally.


The rules talk of monitoring pollution, implying the presence of enforceable standards to compare transgressions with. Monitoring is pointless in a vaccum of comparative data. In India, there are no specific standards for emission of lead in the air, except in the state of Maharashtra.

However there are standards for its emission in water as effluent covered under the Water Pollution (Prevention and Control) Act, 1974. What emission standards are the lead smelting units going to follow? If there are no standards how can the rules be functional?

Recent mef notification on 'eco-friendly' lead-acid batteries says that units in the recycling business can get the eco-friendly mark, if required, under Environment Protection Act, 1986. But the fact remains that such a mark is not compulsory. The ambiguity persists.

Tentative though it maybe, it is a positive move by the government. The rules mean well. If implemented properly they can make a difference, if not, they will end up flowing down the drain of silent neglect.