IN Orissa, a battle rages between marine conservation and local fisherfolk. At the heart of this conflict is the ban on fishing in the vicinity of the Gahirmatha Marine Sanctuary. The 1,435-sq km-long sanctuary stretches along 70-km of the coastline of Kendrapara district and was established in 1997 to protect the endangered Olive Ridley (Lepidochelys olivacea) turtle. It also acts as a nursery for fish. The area provided livelihoods to thousands of fishermen, till the ban complicated matters. But whilst the activities of fishermen have been restricted, the construction of a mega-port has been permitted and oil exploration has been given the go ahead with minimal investigation into impacts on Gahirmatha.

Besides Olive Ridleys, the sanctuary also protects dolphins and saltwater crocodiles. But the turtle is truly its flagship species.More then 150,000 turtles congregate off the Kendrapara coast every winter to breed before the females come ashore to lay eggs in a mass nesting event known as an arribada--Spanish for arrival. Kendrapara is one of three places globally where aribbadas occur.

Fish congregate over the winter months to feed on the incoming nutrients and plankton, which coincide with the turtle congregation. It is here that seeds of discord are sown turtles, which need to surface every 30-45 minutes, drown when trapped in trawl nets or the nets used by the larger boats (see box The traps). According to sea turtle expert Kartik Shanker, every year around 10,000 turtles are washed ashore on the Orissa coastline having drowned in fishing nets. An accurate tally is difficult to ascertain because not all turtles wash ashore. 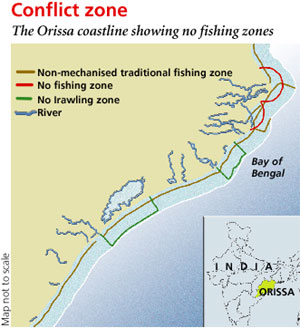 From November 1 to May 31, every year--the breeding season--mechanised gill-netters must fish beyond 10 km from the shoreline, and trawler boats beyond 20 km in Gahirmatha. The ban is said to affect around 20,000 fishermen.

The responsibility for regulating fisheries is shared by the coast guard, which patrols the 20-km boundary, and the Union ministry of environment and forests (moef) which patrols the inshore waters. Since November 1 this year, forest rangers have apprehended 12 fishing vessels, each with a crew of more than six. A forest ranger who spoke on conditions of anonymity told this reporter that vessels are normally confiscated and the boat owner slapped a fine up to Rs 30,000. He says that 80 per cent of illegal fishing vessels they spot escape, often after a 4-5 km chase. Patrolling teams need stronger, faster boats to catch the vessels and also, if need be, to escape--the fishermen are often armed. Last year one of his team was shot down, and the day after this reporter visited the district a patrolman shot a fisherman for failing to stop fishing.

Speedier patrol boats or not, the fishing ban has taken its toll. Krushana Mandal of Kharansi village was caught fishing in the sanctuary two years ago and was fined Rs 30,000 for the release of his boat, money which he had to borrow from a local fish merchant. Failing to repay his loan, his vessel was seized by the moneylender. Now he is an agricultural labourer occasionally working on fishing boats.

N C Halder, president of the Orissa Traditional Fish Workers Union, says around 2,000 fishermen have emigrated for work. Since 2004, eight fishermen have committed suicide and half a dozen more have become mentally unstable. The week before this reporter visited Kharansi, Bauddanhath Saraswati took his life having fallen into debt. The eldest of his five children Bisu explains that his father had been a prosperous man who owned four gill netting boats. His troubles began in 2004 when two boats were seized.To pay the fine, he sold his other two vessels and took loans from a merchant, accruing debts of Rs 50,000. Failure to repay, meant the loan escalated; Saraswati became mentally unstable, and finally committed suicide.

It's not just fishermen. The ban has hit V K Nayak's diesel business and he may lose his job. Sujid Bepari, a carpenter used to make fishing boats. Now he makes furniture.


Kundan Kumar a specialist in tribal and land rights in Orissa draws two overlapping circles the right circle represents the fishermen's practices, the left is the ecosystem. The overlap in the middle represents the interaction between fisherfolk and livelihoods, here both positive and negative practices can be observed, and this overlap is critical. He suggests that conservationists were too hasty in creating the sanctuary and that there should have been more participation with local people to make sure their needs were considered.

Biswajit Mohanty of Wildlife Trust, Orissa, is less sympathetic he says that the real problem is simply that there are too many fishing boats, and too many people. This region has seen a massive rise in population as thousands of refugees were settled here from Bangladesh and West Bengal in the early-1970s. Since then thousands more have arrived, putting pressure on the fragile ecosystem. This year 1,551 illegal immigrants in Kendrapara were issued quit India notices, (The Pioneer, December 12, 2006). Mohanty cites Talchua village where the population has risen from 30 in 1951 to 30,000 in 2006.


The fishermen of Kendrapara might justly feel they are being unfairly treated as further down the coastline in two other turtle congregation areas, the mouths of rivers Devi and Rushikulya, there is virtually no enforcement of rules. The Orissa Marine Fishing Regulation Act, 1982, stipulates a year round ban on mechanised fishing within 5 km of the shore along the entire 480 km of Orissa's coastline, and around the congregation zones trawlers must fish beyond 20 km of the shore and mechanised gill netters 10 km.

According to Sovaker Behera, president of Green Life Rural Association , a group of fishermen-cum-conservationists, the coast guard, whose responsibility it is to monitor these waters, has a deep hulled boat which is incapable of pursuing boats into shallow coastal waters allowing easy escape. Fishermen close to Devi river explain that they regularly see trawlers within a few hundred metres of the beach.

Shanker and his colleagues say the high incidence of trawlers might be the reason why no arribadas have been observed here since 1998-1999, only sporadic nesting.

The trawlers catch everything in their path says Purna Chandra Behera, a fisherman. Small fishermen in contrast use gill nets that are so short that if a turtle does become tangled it is freed before it drowns. The turtle is a popular icon amongst them, considered a reincarnation of Vishnu. Turtles also feed on jellyfish, a natural predator of juvenile fish.


Fishing is not the only threat to turtles. The upcoming Dhamra port is a major threat. The port was cleared by the Union ministry of surface transport, and not moef. Being classed as 'minor', the Rs 1,500-crore project did not require an environmental impact assessment. Environmentalists fear that increased traffic will increase turtle mortality and put turtles off breeding. Light pollution will disorient hatchlings.

The government has also cleared a Rs 1,280-crore oil exploration project undertaken by Reliance Industries Ltd (ril), in two sites off the Orissa coast 90 km from Gahirmatha and 65 km from Rushikulya. This contravenes the decision of a multi-disciplinary expert group set up by moef in December 2003. Having assessed the impact of off-shore drilling on the congregation of turtles, the group recommended that no drilling be carried out off the Orissa coast during turtle breeding season. moef officials were not available for comment. An ril spokesperson, however, said "The Oil and Natural Gas Corporation and Oil India has drilled many exploratory wells since 1976 within close proximity of Gahirmatha and there is no evidence of any adverse effect on turtles."

There are other threats. Stray dogs, jackals, birds and humans all prey upon the eggs, and once hatched only one in 1,000 survives to maturity. Fishing villages are surrounded by casuarina plantations, planted for fuelwood by moef in a programme that began more than 30 years ago, which severely reduce the amount of beach available for nesting turtles.

Light pollution, created by nearby prawn farms, is another threat. Turtle expert S Dattari in a recent book, Riddle of the Ridley, notes that hatching at night, baby turtles look for the dim glow created by the reflection of stars and moon on the sea. But, says Behera, light pollution disorients the hatchlings, fooling them into migrating inland where they soon perish in the sun.

Asish Fernandes an ocean campaigner at Greenpeace sums it up well. The government and local leaders have failed to respond to the critical situations fisherfolk find themselves in. Alternative credit facilities and alternative sources of livelihood are required, along with a participatory approach between fisheries management specialists, conservationists and local fisherfolk to identify sustainable fishing practices that can be permitted in the sanctuary.