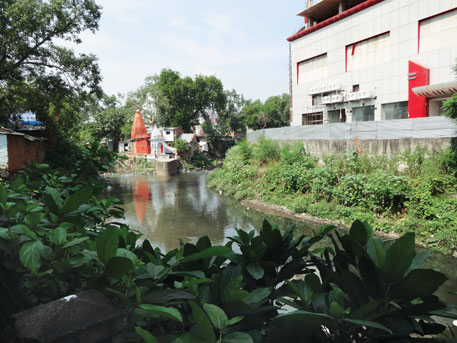 Looking for the origin of a river is most likely to excite any potamologist. But not if it is the Nag river, from which the city of Nagpur in Maharashtra takes its name. As if driving for hours over gritty roads and navigating through narrow lanes is not enough, one has to stop frequently to ask for directions. “We get lost every time we come here,” says Pradhyumna Sahastrabhojanee, one of the members of a group of ecologists who had studied the river and established its origin at the foot of the Lava hills just outside Nagpur in 1998-99. “Things change so fast. New construction is coming up over every inch of this area,” he adds. What makes it worse is the incredulous look local people give you when you ask them about the river. “River? Here?” is the standard response.

Finally, when one gets to the point that is supposedly the origin, it is devoid of natural landscape. Instead, there is a large cemented well and a chunk of lava rock surrounded by dusty, dynamite-blasted remains of the hills with poor urban dwellings pressing in on all sides.

Such a pitiable condition is not surprising, given that the river has been in the eye of a controversy for the past two years over its source of origin. While environmentalists claim the Nag river originated in the Lava hills outside the city, industrialists have identified a dam within the city limits as the point of origin as this gives them leeway to carry out real estate business in the upper stretches of the river, which is protected under the law.

Clueless about the source

The Maharashtra government notified the Nag only in 2000 under its River Regulation Zone (RRZ) Policy formulated in the same year. The RRZ policy earmarks the upper stretches of all rivers—from its origin to the first dam—as drinking water zone because of its pristine quality. But the notification did not identify the Lava hills as the site of origin of the Nag river. It also did not take into account the fact that the Central Provinces District Gazetteer, the official record-keeping document during the days of the British, recorded these hills as the origin of the river as early as in 1908. 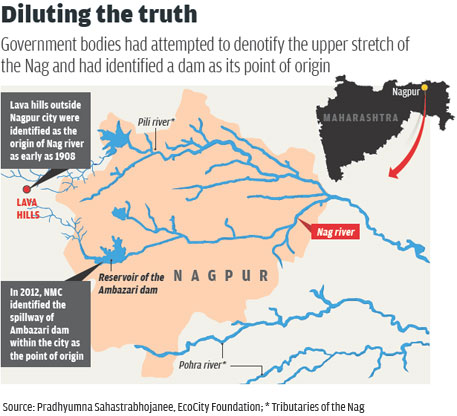 Nor was the district administration keen to protect the river. Sahastrabhojanee says while the administration set up a committee to revive the river around 1999-2000, it continued to give residential and industrial clearances in the 3 km buffer zone along the bank of the river throughout its entire stretch. As a result, a large part of the hills where the river originated has been blasted away by real estate developers. The upper stretch of the Nag—spanning 6 km in length from the Lava hills to the Ambazari dam in the city—is today clouded with construction.

Lobbying for denotification
When the RRZ rules were notified in 2009, nine years after the policy was formulated, environmentalists saw a glimmer of hope. In compliance with the policy provision that does not allow industries within the buffer zone, the Maharashtra Pollution Control Board (MPCB) rejected all expansion proposals of 209 industries in the Hingna Maharashtra Industrial Development Corporation (MIDC) area and also refused to give consent to renewals. This move was met with a wave of protests from the industry.

“Since 2009, the fate of all 209 units has been uncertain because they are operating without consent. Many industries need to expand to stay viable, but are unable to do so,” says Chandramohan Randhir, president of Hingna MIDC Industries Association.

However, in a surprise move in September 2012, MPCB floated a proposal to the state government to denotify the upper stretch of the river, pleading that the stretch was already too badly encroached upon to be conserved. The Nagpur Municipal Corporation (NMC) went a step further and identified the spillway of the Ambazari dam, where the river enters the city limits, as the point of origin. The proposal was rejected by an order of the state Ministry of Environment and Forests (MoEF) dated September 3, 2013.

The matter did not end there. In September this year, the committee which formulated the RRZ policy met under the chairperson of the industry secretary, when the environment secretary was on leave, and decided to downgrade the status of the upper stretches of not just the Nag river but also its tributary, the Pili. They decided to relax RRZ norms for the Hingna MIDC industries. The decision has been put on hold by the state.

Both NMC and MPCB have distanced themselves from the second denotification attempt. “For us, the matter ended when the government turned down our proposal last year,” says MPCB regional head N H Shivangi. Officials from all departments involved in giving residential clearances say that new permits are being granted as per RRZ rules. Shivangi adds that while existing constructions cannot be touched, the body has stopped giving fresh clearances in the buffer zone of the river. But industrialists are adamant on relaxation of the rules. “Apart from four or five chemical industries, most of these units are either engineering or plastic-moulding units which do not cause water pollution. There is no reason why the rules should not be relaxed for these units,” Randhir says.

According to Sudhir Paliwal of Vidarbha Environment Action Group, which had filed a complaint against the second denotification attempt, MPCB’S report proposing denotification has caused more damage as it has encouraged industry to mount pressure on the government,” he says.

Added problem of sewage
Another problem is NMC’s lack of vision in handling the sewage dumped into the river. The Nag and its tributaries together receive 345 million litres per day (MLD) of untreated sewage within the city, in addition to the sewage released in the upper stretch of the river. Since 2000, all that NMC has done is set up an 80 MLD sewage treatment plant (STP) at Bhandewadi village, which is lying defunct. In 1999, it had rejected the proposal of the non-profit Eco City Foundation for decentralised sewage treatment for a mammoth Rs 15,000 crore project for a conventional STP for the city. Funds are yet to be allocated for this plan. A separate Rs 126.3 crore master plan for the Nag river is also waiting clearance from the Union MoEF.

The Nag river should have been one of the easiest rivers in the country to conserve because its origin is so close to the city, says Sahastrabhojanee. “The conservation effort will require coordination between only the Wadi gram panchayat under whose jurisdiction the upper stretch of the river falls and NMC. But nobody is interested,” he adds.