As the rating progressed, industry opened up 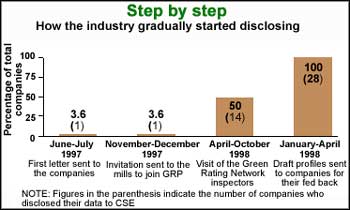 June-July 1997: The first letter sent to the 28 companies in the pulp and paper sector requesting them to send their annual reports and brief profile. By the end of August 1997, only seven got back to cse with their annual report and only one of them, the West Coast Paper Mills Ltd ( wcpml ), Karnataka, sent its profile.

Few companies even understood the basic purpose of the project. This was proved by the fact that all the reports were sent by chartered accountants. Only in the case of itc -Bhadrachalam Paperboards Ltd, Andhra Pradesh, it was sent by the vice-president (plantations).

April-October 1998: Since the response from the companies was very poor, cse was left with few options, one of which was to undertake a survey and data collection exercise on its own. By October 1997, the Green Rating Network was established comprising volunteers from all over the country to undertake the exercise on behalf of cse . During this period a strong link was established with a majority of the companies and, by the end of October 1998, a substantial amount of data was collected. However, even during this phase, only 14 companies disclosed information to cse .

January-April 1999: By mid-January, the draft environment profile of all thecompanies was sent to them for their feedback. The response was amazing. Immediately after receiving the draft profiles, all the companies got back to cse with their response.