There is 1.1 million tonnes of highly contaminated soil at the plant site, according to an estimate by the National Environment Engineering and Research Institute (NEERI) in Nagpur.

It needs to be treated and safely disposed of. The report said up to two metres of soil will need to be dug up, except at one place where the underground dump was as deep as eight metres.

The main contaminants, according to NEERI, are chlorinated benzene compounds and mercury, both volatile. The impervious soil near the plant site prevented toxic chemicals from leaching too deep. Besides the ground, there are 70 litres of mercury spillage and 1,500 tonnes of corroded plant structures that have to be dismantled and detoxified. Five borewells downstream of the plant, within a range of 3.5 km, have shown the presence of pesticides, the NEERI report said. It has advised these wells be sealed urgently. The study conducted by the Centre for Science and Environment in December 2009 found groundwater contamination as far as three km.

NEERI conducted a similar study in 1996 at the behest of Eveready India Ltd, the Indian arm of UCIL, because the company wanted to dismantle and sell the plant. The study found pesticides, mercury and other toxic elements. UCIL did not make this report public; it returned the land to the Madhya Pradesh government without remediation, violating the lease condition that the site be handed back in “habitable and usable condition”.

The GoM report has recommended Rs 300 crore for decontamination and remediation of the plant site. The state government will administer the cleanup with technical help from the Centre. Based on studies by NEERI and Hyderabad- based Indian Institute of Chemical Technology (IICT), the GoM recommended a joint task force of Central and state governments to be headed by the Union environment ministry. Foreign companies could then be called to bid for the clean-up.

Sevin tar and other pesticide residue stored in the godowns would be sent to the Pithampur industrial area in Madhya Pradesh’s Dhar district for incineration. But residents are against letting this waste into their neighbourhoods (see ‘Bhopal’s toxic links with Indore’, Down To Earth, April 15-30, 2009). NEERI has suggested that the best solution for the contaminated soil is to store it in secured landfills, which should be constructed at the plant site. The only option for cleaning the groundwater is to pump it out, treat it with activated carbon and pump it back into the ground, NEERI said.

NEERI and IICT have given an estimate of Rs 100 crore for soil clean-up and 110 crore for plant dismantling. An industry insider, who works on waste treatment and remediation, said the cost can go up to Rs 1,500 per tonne of soil which would mean Rs 165 crore only for soil remediation. For pumping water, treating it with carbon and then disposing of the carbon can cost Rs 200- 300 per kilolitre, he said. “There are many companies in India that can do the clean-up much better. Even waste treatment facilities abroad are managed by Indian engineers,” he said.

“More than the present level of contamination, I am worried how the government will carry out the remediation,” said Salim Romani, former Central Ground Water Board chairperson who now lives in Bhopal. “What if the government does a shoddy job?” he asked, voicing the fear of most Bhopal’s residents. 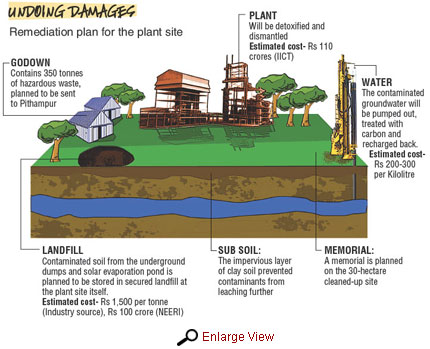