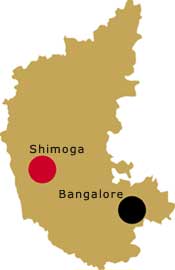 Organic is happening in the wetlands of Hollagaru village in Shimoga district of Karnataka. The high production of arecanut, paddy, vanilla and coffee has changed the fortunes of the local farming community. There are about 200-300 farmers in the village. Each owns between one and two acres of land. The farmers work in the Swa-Sahaya Sangha (self-help group). "The method has really helped increasing yield. As of now, organic farming has been introduced on nearly 80 hectares (ha). The technique involves manure production from go-mutra (cow urine), cow dung and arecanut leaves. We dig half-feet-deep pits, and dump all the manure in them. Farmers pay Rs 200 each annually to join the group," says Thimamappu, one of the farmers.

Organic farming in these inhospitable conditions is not a matter of choice. Shimoga is a hilly region where soil quality is poor and erosion rates high. Rama Rao, an organic farmer who has benefited from the scheme, believes that one of the disadvantages of practising inor-ganic farming methods in this marshland was the leaching of chemical pesticides and fertilisers into nearby waterbodies, during the monsoon. The situation has been controlled to a large extent in the past three years.

"The principal reason for the shift to organic farming was to combat the problems of land degradation, water pollution and soil erosion," says Sadashiva Butt, leader of the Swa-Sahaya Sangha." It's not only the manure, even the pesticides we use are organic. Green manure, micronutrients, neem cake fungi and chicken droppings are used in our fields. We normally use roughly 10 litres of liquid manure per hectare per day, instead of the chemical fertilisers and pesticides that we used earlier. Besides, organic manure is also pollution free."

More and more farmers are being encouraged to use organic farming methods in nearby areas like Hamsagaru, Hosalli, Gotugaru, Arehadda, Maranukauli, Kogodu, Kaithota and Sasaravalli. The increasing prices for organically grown paddy and the increased paddy yield serve as incentives for taking to organic farming. Organic paddy currently sells at about Rs 9 per kg, compared to Rs 6 per kg being offered for the produce grown with chemical inputs.

The Shimoga region is also suitable for the cultivation of vanilla and has registered a growth in production during the past three years. Vanilla processing in Hollagaru, which was pegged at about 8 metric tonnes (mt) per day in 2003, has risen to 40 mt per day in 2005.

The farmers of Hollagaru have organised themselves. They have regular meetings on Saturdays where they talk not only about farming but also study improved production techniques. There is a think tank in the district that analyses matters and serves as moderators at these meetings. A member who fails to attend three consecutive meetings loses membership.

An annual workshop is organised for the benefit of the farmers living in nearby villages. Resource persons like Hemanth Hegde from Dharwad Agricultural University, G M Hegde, Bhairumbe Belur, Hegde Subbanna, Vinayak Rao Belur and others advise the farmers on latest methods and techniques to be implemented in order to obtain higher yields. Each year, three to four trips are organised for the members to visit other organic farms in and around Dharwad and Shimoga. The success of the Hollagaru initiative can be attributed to Kirishi Prayog Parivar, an ngo working for the promotion of organic farming in Karnataka.

The technique used in Hollagaru is similar to the one being used in Israel, called Cupid, in which all farmers get a decent share of the profits from the crops they grow.