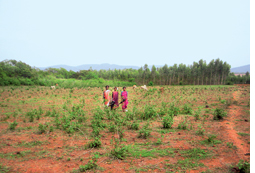 "I have no choice but to leave my village in search of work. Otherwise, my family will starve," says Samra Malik of Malikput village in Orissa's Koraput district. He, and several others landless like him, go to work on railway construction sites in Andhra Pradesh and coastal Orissa. Malik alleges that a state body does not allow them to grow cashew leaving them with no other option.

Malikput and 21 other villages under the Machkund tehsil comprise the largest cashew growing belt in Koraput. There have been constant conflicts between villagers who say that the cashew growing land belongs to them, and the state body--Orissa State Cashew Development Corporation--which calls the villagers 'encroachers'. The 'encroachers' say cashew brings in money and offers them hope of a better future without having to leave their villages. "One acre of cashew, if the harvest is good, fetches us anything from Rs 5,000-6,000," says Bhakta Ram Pangi of Harganda village.
The conflicts, however, have

assumed a war-like situation at present, with no signs of truce. "For years, we have been nurturing and protecting these plantations. How can we hand it over to traders who have got leases from the corporation by paying money?" asks Malik. Few months ago, the supervisor of the corporation visited Harganda and Malikput and threatened people with police action if they refused to leave the plantations. The cashew development corporation has been leasing out cashew plantations in different parts of Koraput for harvesting on a yearly basis through open bidding since 1979. However, it is only recently that protests have become more organised and people have stuck to their claims. "The corporation calls us encroachers but we know we have a right to this land because our forefathers once ploughed this soil. We have been threatened with police action and cases but we have no intention of leaving," says Mangu Khora of Kanta, among the 22 villages protesting.

In Mamatpur, women have been guarding the hill slopes. They are protesting under the banner Dangar Adhikar Samiti. "This year, the cashew corporation has given the lease to Upapada, a non-tribal," says Damuni Khilo, leader of the village's women brigade. "He had come to stake his claim in May last year but we refused to let him in. He filed a complaint with the Machkund police but when the policemen came we chased them away. So far, there has been no case against us but we are expecting them to file one anytime. In any case, we are not going to leave our plantations," she says.
Cashew grows in 22 of the 30 districts in Orissa. Its main concentration has been in Koraput where the soil conservation department took it up in the mid-50s. It checked soil erosion in dam areas like Machkund and Kolab. Plantation was then taken up on a massive scale in a phased manner under different government schemes like Economic Rehabilitation of the Rural Poor, Integrated Tribal Development, Employment Assurance Scheme and Jawahar Rojgar Yojana.

Local communities engaged in the protection ofthese plantations had hoped that the plantations, most of them being close to their villages, would be given to them. But their hopes were dashed when the Orissa State Cashew Development Corporation was formed in 1979 and the soil conservation department was asked to handover the plantations to the corporation, which has ever since leased out cashew orchards through tenders. The corporation, at present, has about 4,047 hectares under its control. This has tilted the scales against tribals who have not been able to adapt to leasing and tenders due to a lack of understanding of the process.

Barring a few like Lobo Matam of Godiput village, who got the lease from the corporation for five years in a row from 2000-2001, the tenders have generally been cornered by well-to-do traders from Jeypore and other parts of Orissa.

Matam, who stopped bidding following protests from villagers, who insisted that they would collectively harvest cashew, claims there have also been instances of traders 'using' tribals to obtain leases. "With stiff resistance from villagers, traders have tried to obtain leases by offering us money. But we have consistently refused," says Matam.


Bhimsen Sabar, former tehsildar of Machkund, had issued pattas (deeds) for harvesting cashew to around 1,500 people in different villages in Machkund between 2004 and 2005. But the present administration has refused to recognise the pattas citing irregularities in their issuance. While Sabar was transferred soon after the controversy, people are not ready to buy the present administration's argument. "All this is being done keeping in mind the interests of the cashew corporation. If we are allowed to retain the pattas, it will only harm the corporation," says Sukhram Gadanga, president of Machkund Vaschyut Mahasangh, another outfit fighting for plantation rights.

Present tehsildar Chandrasekhar Mohapatra says the pattas were issued irregularly without demarcating land. "When we issue pattas we make due inquiry about the social and financial status of the prospective beneficiaries before preparing the list. The land, too, is surveyed for its quality before demarcation but nothing of that kind appears to have happened in this case. The pattas were issued at random. Besides, we are unable to find any records in our office," says Mohapatra who claims he is making personal efforts to collect copies from people. "So far, I have collected 800 copies. It's a difficult task but I am still doing it for people's sake because I want to be sure about the genuineness of their claim," he says.

But people are sceptical of such moves and say that some of them may not have pattas, yet own the land. "The land belongs to us though we may not have pattas to back our claims. When land settlement took place in Orissa in 1961, our predecessors may have failed to stake claim due to their ignorance. If they had approached the authorities they would have got the pattas. They perhaps thought there was little need of it because they had been using the land for generations," says Budhu Dantu from Harganda.

Mohapatra says such claims are only partly correct. "It is true that tribals may have failed to claim because of ignorance. But it is wrong to say that none of their claims were registered," he says, adding that tribals were now also staking claim to the cashew growing on the hills, which is government property. "How can somebody claim a hill to be his own?" asks Mohapatra.


Pramod Kumar Routray, assistant in the

cashew development corporation's Lamtaput unit, rubbishes claims of the tribals as propaganda. "They are being incited by organisations like Dangar Adhikar Samiti and other local ngos. Pressures on people who have obtained leases by paying money are unwarranted. The money will go into government treasury," says Routray.

But people like him have not taken into account the fact that Koraput falls under Schedule v of the Indian Constitution and that the Panchayat (Extension to Scheduled Areas) Act is implementable there.

The laws make it mandatory for local gram sabhas to be consulted with regard to any kind of cultivation in and around villages which people claim to be their common property resource.However, Laichan Badnaik, sarpanch of Chickenput panchayat under Lamtaput block, says no attempt has ever been made to take the consent of gram sabhas for leasing of cashew plantations.

Villagers have let it lie for long. But not anymore. Badnaik says what tribals want will prevail. "We need to win this war over the cashew corporation."