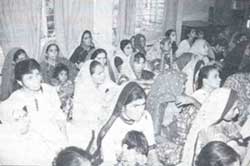 "Bath? Twice a month! Washing clothes? Who knows!" There was deep hurt behind the sarcastic laughter of the angry woman. Her audience understood. There were about 300 women -- from 9 districts of Gujarat -- who had congregated in Ahmedabad on May 30 to attend a meeting organised by the Self Employed Women's Association (sewa). The meeting called for women, who constitute almost 2/3rd of the water-users, to be made central in the decisionmaking process in this sector.

"We keep hearing about wonderful new water schemes funded by local panchayats and by foreigners, but when we go to collect water, there is none!" Ihartaben from Dumali village (Ahmedabad district) said. Dumali receives water barely once a month from the much touted Koth Gangad water pipeline. The women have to walk miles every day to Devdholera or Kesaradito to fetch water.

Meanwhile, the self-proclaimed government experts, with little knowledge of traditional systems, discourage other alternatives. "When we build a well or harvest rainwater using traditional methods, the experts say that the water is a risky for our health ," said Rudiben of Fangli village of Banaskantha district.

The fact is that there is more money to be made through building new (albeit nonfunctional) schemes than in the maintenance of existing sources. The women feel that their participation in the integrated water projects is just a sop. "We want to formulate our own projects and have access to funds and expertise made available at the local level," said Shrifabibi, who had led the women of her village, Gokhantar (Banaskantha district) in constructing agrifilm-lined ponds. The women will make mistakes, she agrees. But these mistakes would not snowball into regional crises, as the government's projects often do.

In some villages of Mahesana, near Siddhpur, the high fluoride content of the water has ruined the villagers' health. The Gujarat government has proposed a new scheme covering 550 villages. But, "Who knows when the scheme will take off? At least 10 years, may be more. And will it help recover our health?" asked Samuben Thakore of Ganeshpura.

Even handpumps don't work. The Bodeli taluka is home to the population displaced due to the Sukhi dam project. The much awaited handpumps were installed but do not function. "We have a choice: get drowned under Sukhi dam water or die of thirst at the new settlement," the delegate from Bodeli said wryly. Problem is, the data required to activate the water resources simply do not exist.

The women feel that the government's efforts at creating hydrological, hydrogeological, socioeconomic, water quality and environmental data bases should be focussed on the village. "Help the village to create and effectively use such information in its own decision making," said Samuben. Anjanaben, the project coordinator said, "The support for developing water markets come from those who have easy access to uninterrupted supply of refrigerated water. There is not a single woman from the water-starved villages who has called for water markets." The water markets, however, are ruthlessly dominated by the big farmers. Thus, Ela Bhatt, who presided over the convention, said, "We plan to move women from being water users to becoming water-owners."

Building local capacity is a must. In Rupal village, Ahmedabad district, the borewell is inserviceable. The women go to the next village for water. Some manage to buy it at Rs 30 per month per family.

Women in the Thekaria village Kutch said they have to go to neighbouring Biber, where waste water is collected in an excavation site. The Thekaria women carry back this water after the solid waste settles down. And there have been reports of "water wars" reported in international environmental magazines. "In Gujarat's villages water battles are a reality. Kheda, traditionally a water-surplus area, has villages where the panchayat borewells supply water for just 2 hours a day. "Those 2 hours are marked by riot-like scenes, and social tensions run high," said Ushaben of Kheda.

Though recognition as water-users is coming about reluctantly, the severe crisis has hit women farmers already. sewa now plans to consolidate its almost decade-long work with women water-users in Gujarat, and use the outcome of the convention to push for decisionmaking powers at local levels, both in Gujarat and outside.

Mihir Bhatt is an architect and activist from the Foundation for Public Interest, an ngo based in Ahmedabad