Out on their own

Out on their own 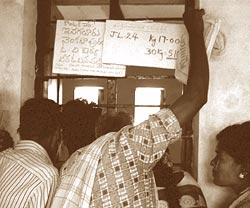 There are several delivery systems whereby government can help farmers in AP. Some, like the agriculture extension system, institutional lending bodies and irrigation,, have a direct role to play in agriculture. Others, like the Panchayati Raj institutions, should've provided the template for success. None are currently of any good.

Take agriculture extension, for instance -- the government's way to interact with farmers. The TDP government came to power in 1994, but didn't recruit agriculture extension officers till it got into election mode. Of the present field staff of 10,687, as many as 2,579 were hired in 2002 and another 5,297 last year. About 75 per cent of the field staff was hired in the past two years as multi-purpose extension officers (MPEO) on an annual contract of Rs 5,000.

What were the criteria for these recruitments? Candidates had to hold a BSc degree, 'preferably' in agriculture. As a consequence, all kinds of unemployed young people joined the extension machinery, which communicates the latest scientific learning in agriculture to farmers in a digestible manner. It is the field staff that apprises the agriculture officials of what farmers need, mediating between the farmers and the policy makers. The tech-savvy TDP government even hired graduates in computer sciences, zoology, and what have you. The new recruits did not possess either the technical education or the communications skills to do their job. And they got almost no training or guidelines. MPEOs are the implementing arm of the Rythu-Mitra Groups, started last year to bring to agriculture the self-help group system of collective action. It doesn't require investigative journalism to figure out that the groups either don't exist in villages, or that most villagers are unaware about them.

SOWING LOSSES: Perhaps the biggest worry for agriculture in AP is the rising cost of production, which makes the state uncompetitive and reduces farm income. " AP has a surplus in paddy, cotton and groundnut. But in all the three crops, AP can't compete with the other states in terms of cost of cultivation," says S Subrahmanyam of the Centre for Economic and Social Studies (CESS), Hyderabad (see table: Farming is expensive in AP). "Profit margins are down to Rs 2,000 per acre per year in irrigated areas. As 80 per cent of farmers are marginal (with less than five acres of land), the annual average income for a household from agriculture is Rs 10,000. Imagine running a household with that," he says.

NO SEED, NO GRAIN: Farmers in Telangana complain that the extension staff acts as the marketing wing of seed and pesticide companies, recommending which pesticide to spray. The seed sector itself requires an overhaul, and this can't be done through biotechnology, one of Naidu's hobbyhorses.

"It is generally agreed that the cost of seed should not be higher than 10 per cent of the total cost of cultivation," says Nageshwar Rao, a retired agriculture officer in Anantapur. "To grow groundnut, one acre requires seed worth Rs 1,500. The scale of finance approved by the banks for loans is Rs 3,600 per acre. So the seed costs 40 per cent of the total cultivation cost. This is the main reason for the losses that the farmer suffers. And all these calculations are for years with normal rainfall. Take a drought year, and it isn't difficult to understand what's ruining farmers." The seed village programme, which aimed at creating seed banks among farmers, has collapsed. It is tied up with the Acharya N G Ranga Agriculture University, which gets little funds from the state government.