While Delhi struggles to make rainwater harvesting compulsory even after 13 years of amending byelaws, Chennai shows the way 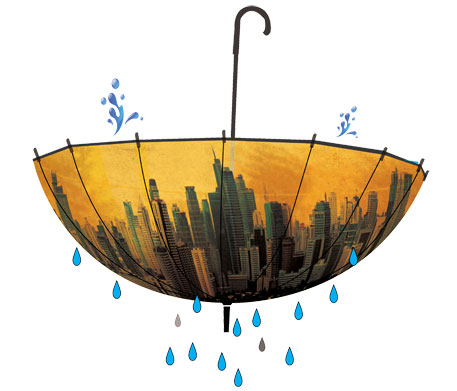 It is a known fact that Delhi, like most other metropolitan cities, is struggling to meet its water demand. The capital faces a shortage of 207 million gallons per day (MGD) or 302 million cubic metres (MCM) of water annually, according to the 2013 Comptroller and Auditor General (CAG) report. To make matters worse, this shortage is being bridged through illegal withdrawal of groundwater, which is lowering the groundwater table.

Ironically, Delhi was one of the first cities in India to amend its byelaws to accom modate rainwater harvesting in 2001. On an average, the city receives 755.4 millimetres (mm) of rainfall every year. According to the internationally accepted formula of multiplying total area, annual rainwater and a coefficient of rainwater runoff, Delhi can recharge its groundwater with 560 MCM of rainwater annually—nearly twice the annual water shortage of the city.

But 13 years after the city made rainwater harvesting mandatory, the practice has failed to pick up because of complicated systems for approval, inexperienced officials and disinterested residents. As a result, 470 MCM of water (about 85 per cent of the total runoff generated in the city) goes waste as it flows down storm water drains that are meant to carry rainwater (see ‘Capital loss’).

Rainwater harvesting can solve water crisis in the south district of the city that faces acute water crunch. The district can recharge groundwater with 93.8 MCM of rainwater annually. Instead, as per the Central Ground Water Board (CGWB) data, the groundwater level in the area has been dipping by a metre every year since 2001.

In 2000, Vinod Jain, who runs a non-profit called Tapas, had filed a public interest petition in the Delhi High Court on the scarcity of drinking water in the capital. Following his plea, the court made rooftop rainwater harvesting compulsory in Delhi in 2001. In the same year, the ministry of urban development and poverty alleviation (Delhi division) issued a notification to modify Delhi’s building byelaws of 1983 to accommodate the high court verdict. According to the amendment, it became mandatory for new buildings with a rooftop area of 100 square metres or above to harvest rainwater. Water recycle plants are also mandatory for all buildings that discharge more than 10,000 litres of waste water a day. But things have not changed much in 13 years.

Municipal Corporation of Delhi (MCD) officials say that while all building plans that come to them for sanctioning have a proposal for rainwater harvesting, only a few builders finally construct rainwater harvesting structures. They say they are helpless as only 10 per cent of finished projects apply for the mandatory completion certificate, when the department can stop projects that do not have rainwater harvesting provisions. Although it is mandatory, “not getting a completion certificate does not affect them in any way as there is generally no penalty imposed. So, they simply do not bother applying for it”, says B S Yadav, executive engineer, MCD.

This is just one part of the problem. The other problem is that even the projects that have rainwater harvesting facilities do not use them. Several government departments, institutions and residential societies have non-functional rainwater harvesting structures. In 2013, activist Mahesh Chandra Saxena filed a petition in the National Green Tribunal (NGT) highlighting that at least 18 government departments including the Delhi Jal Board, the Public Works Department, the New Delhi Municipal Corporation and Flood and Irrigation Department were not doing rainwater harvesting. The green tribunal asked the Delhi Pollution Control Committee (DPCC) to prepare a report on this, but DPCC refused saying it lacked the expertise.

This year, another public interest petition was filed, by advocate Raj Kumar Kapoor, to make rainwater harvesting compulsory in Delhi, and more importantly to ensure execution of the mandate. Kapoor says his petition pleads that the court instruct government institutions with big rooftop areas to go for rainwater harvesting. “The earlier petition talks about new constructions but looking at the dip in groundwater in the city, rainwater harvesting should be mandatory in all buildings—old and new,” adds Kapoor.

In fact, the Central Ground Water Authority (CGWA)—the apex agency for regulating groundwater in the country—had issued notices in 2001 and 2004 to housing societies, institutions, schools, hotels, industrial establishments and farmhouses in South and South West districts to adopt rooftop rainwater harvesting systems in their premises.

But nothing has happened so far.

Delhi is also providing financial assistance to registered resident welfare associations, cooperative group housing societies and institutions for the entire city (except for a few places in North West, West and North East districts) for implementation of rainwater harvesting systems. Under the My Delhi I Care Fund, financial aid is up to a maximum of 50 per cent of total cost of the rainwater harvesting structure or Rs 100,000, whichever is less. Rainwater harvesting schemes can also be taken up through local development funds available with area MLAs.

But Vandana Menon, an East Nizamuddin Colony resident, says the process to get financial assistance is not simple. Applicants are only supposed to follow a typical design approved by a government agency. The design often may not be appropriate for a particular area. She says her colony used its own money to implement rainwater harvesting in parks.

The website of Delhi Jal Board says 189 cases have so far been approved for grant of financial assistance and it has been released in 117 cases. However, the government body does not have a database on the implemented projects. It insists that municipal bodies under urban local bodies and department of urban development are supposed to implement the notification on rainwater harvesting. Hence, the data should be collected by the municipalities. The department of environment also does not maintain any record.

With confusion over implementation, individuals interested in harvesting rainwater run from one department to the other to get approvals for the same. For boring recharge well, the MCD has to be approached; then the Delhi Jal Board, district commissioner along with CGWB are to be consulted for sanction of the rainwater harvesting plan. “So, there is a need of a nodal agency to give permission, help the individual with planning and implementation of rainwater harvesting systems and even advising him on monitoring of the system,” says Jain. A rainwater harvesting cell was developed in the Delhi Jal Board to help individuals/communities. But officials’ lack of knowledge demotivated them, Jain points out.

While Delhi is struggling with several litigations on making rainwater harvesting compulsory for the city, Chennai is showing the way. Tamil Nadu faced a severe drought in 1999-2000. This pushed the state to make rainwater harvesting mandatory in all buildings in 2003. Even the existing structures had to develop rainwater harvesting facilities. A deadline was fixed. Political will and administrative efficiency helped a lot. (see ‘Rainwater down the drain’)

Chennai also set strict provisions to penalise the defaulters, which were implemented by the government bodies.

For example, water supply is stopped to buildings that do not have rainwater harvesting structures.

Chennai Water Supply and Sewerage Board (CWSSB) has taken other initiatives as well to promote rainwater harvesting in the city, such as awareness campaigns. It worked closely with communities to bring about the change; NGOS were roped in to motivate people to go for rainwater harvesting projects. A total of 659,026 buildings in Chennai are successfully doing rainwater harvesting today, says CWSSB.

Bountiful rainfall (2,064mm) in 2005 and efficient rainwater harvesting have led to an appreciable rise in the water table, says CWSSB. On an average, the groundwater table has increased across the city. The groundwater table of Tirumangalam area, one of the highly populated areas in the city, has risen from six metres to three metres below ground level between 2005 and 2013.

In 2002, New Delhi-based non-profit Centre for Science and Environment (CSE), in partnership with Akash Ganga Trust, a Chennai-based citizen’s action group, jointly launched India’s first rain centre to help people learn about different initiatives on rainwater harvesting. The centre played an important role in taking the movement from theory to practice. And even after 10 years, the state government has not lost its vision. An audit of rainwater harvesting implementation will be carried out soon by a non-government agency. The water agency, on its part, launched a drive this year to check the maintenance of rainwater harvesting facilities ahead of the north-east monsoon. The agency penalised residents of 1,300 residential buildings that had not de-silted the structures or had damaged rainwater harvesting facilities.

Effective execution is the primary reason Chennai has been successful in its rainwater harvesting initiatives. This continues to be the biggest challenge for the capital.