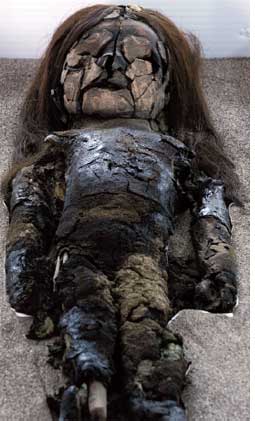 Seven thousand years ago, about 100 km from the contemporary port city of Arica in Chile, a child died. The grieving parents did not want to part with the last remains. They removed the head and internal organs of the child, stuffed it with animal hide, painted a clay model of his head and decorated it with tufts of his hair.

The delicately preserved body was excavated in 1983. Archaeologists believe it is the earliest mummy. More than 100 child mummies were discovered in Camarones near Arica that year. Later, preserved bodies of adults were found as well. Archaeologists say the embalmed bodies were of people from Chile's Chinchorro community.

Unlike mummies in later civilizations--most notably Egypt that flourished for 2,500 years beginning 3,000 BC--that spun around prestige, wealth and power, Chinchorro mummification was based on a democratic and humanistic view of the dead, and everyone was mummified.

Archaeologist Bernardo Arriaza, who studies the Chinchorro at the University of Tarapaca in Arica, wrote that unlike the Egyptians who hid the dead, the Chilean community embraced them. The child mummies even took their place besides their parents at the dinner table.

A few years ago Arriaza launched a daring new theory the Chinchorro were victims of arsenic poisoning. "I was reading a Chilean newspaper that talked about pollution and it had a map of arsenic and lead pollution, and it said arsenic caused abortions. I jumped in my seat and said, That's it," Arriaza said.

Following the lead, Arriaza collected 46 hair samples from Chinchorro excavated from 10 sites in northern Chile. Ten samples from the Camarones river valley had an average of 37.8 microgrammes per gramme--much higher than one to 10 microgramme of arsenic per gramme that indicates chronic toxicity according to World Health Organization (who) standards. The sample from an infant's mummy had a residue of 219 microgramme per gramme.

One theory is that they could have washed their hair with arsenic contaminated water but pathologists explain that washing is unlikely to leave such high levels of arsenic traces.

Arriaza has another explanation. Chinchorros were a fishing society. They collected plants along river mouths and hunted both sea mammals and wild birds. They made fishhooks out of shellfish, bone or cactus needles, spear throwers were used to hunt sea lions and wild camelids, while both lithic points and knives were manufactured using flint stones.

The Chinchorro lacked ceramic vessels, metal objects and woven textiles, but this was not a social handicap their simple yet efficient fishing technology allowed them to thrive along the Pacific coasts.

But life was not without dangers. In the 1960s tests on water drawn by the city of Antofagasta in the Camarones river valley showed that it was laced with 860 microgrammes of arsenic per litre--86 times higher than the limits acceptable by WHO standard.

Arriaza believes this was so even 7,000 years ago. Tests on the Chinchorro mummies strengthen the arsenic poisoning theory.

"In highly stratified societies like ours, lower-class children receive simple or meager mortuary disposal. But in a small group, the death of children certainly threatened the survival of the entire group. Affection and grief may thus have triggered the preservation of children," the archaeologist said.

Chinchorro morticians made incisions to deflesh the body and removed internal organs. Clay, grasses and feathers were used to fill the cavities. The bodies were painted bright red from head to toe, the face was painted black or brown. A long wig up to 60 cm was used to ornament the head. Facial features were modelled to convey life.