While the apex court has brought to Patancheru's effluent-riddled land some relief in the forms of compensation and drinking water, it has not yet remarked on the government agencies' non-functioning complacence 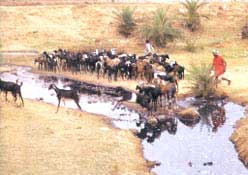 AN INDUSTRIAL estate in Andhra Pradesh's (AP) Medak district, Patancheru lies just off the Hyderabad-Pune highway. Save the electricity lines that snake across the undulating landscape and the unhurried public transport, the region seems untouched by the 20th century. But an insidious by-product of industrialisation has wreaked havoc on the lives of inhabitants of neighbouring villages. Untreated industrial effluents from the estate let out into the Nakkavagu drain have poisoned the groundwater, affecting not just hundreds of acres of agricultural lands but also the drinking waters of about 15 hamlets.

According to the Status of Environment in Andhra Pradesh, Citizen's Report, 1990, published by the Academy of Gandhian Studies, Hyderabad, groundwater pollution due to effluent discharge from industries in places such as Patancheru has led to an increase in diseases, including cancer. "In Sultanpur (the affected village closest to Patancheru), there were deaths due to brain tumour, which is abnormal in these parts," notes the report. 'Since its inception, the work of the Andhra Pradesh pollution control board (APPCB) has been more on the lines of pollution-promotion, than controlling it. Most of the time, it (the APPCB) pursues loosely structured, sham legal cases," it adds.

Following the filing of a PIL in 1990 by lawyer M C Mehta on behalf of Delhi's Indian Council for Enviro-Legal Action, the SC directed the district judge of Medak to inspect the location and submit a report. This report, submitted in November 1995, concluded that over 100 industries were responsible for causing groundwater pollution in the region.


In an interim order on May 10, 1996, the SC
• asked the AP government to deposit Rs 1.5 crore with the High Court (APHC) towards final compensation; the compensation amount was meant to cushion the agricultural loss, calculated at Rs 1,000 per acre (0.405 ha) per year;

• asked the guilty industries (instead of closing them down) to reimburse the AP government the entire amount deposited with the APHC;

• ordered upgradation of the existing effluent treatment plant (ETP), and asked the APPCB to establish a common ETP (CETP); and,


ON ENVIRONMENT: The colours of the Nakkavagu's waters remain unchanged; a brownish-red liquid flows in the drain which skirts Sultanpur's water tank. "We do not drink this water any longer. Some years ago, even our cattle had perished drinking this water," says Vijaya Lakshmi, sarpanch (head of the panchayat) of Sultanpur. Farmers say that the burn-rate of the seedlings they sow in their fields is high, and yields have dropped. Says Butchappa of the same village, "Our yields have come down so much that for most of the year, young men from these villages have to seek employment in the town (Hyderabad)." It is a tale which is echoed by all affected villages.

ON THE POOR: Following the sc directives, water-tankers have become a common enough sight in the villages. When a tanker rumbles to a stop at the village square, women and children, most of whom have been in queue for over an hour, immediately get into the business of filling their buckets and other utensils. The water is from a municipal supply system at Patancheru.

Villagers claim that 'officers' visit their villages quite often, taking notes and making the appropriate noises. But little else follows. "The factories still seem to be releasing their dirty water (effluents) into the Nakavaggu drain," say villagers. Children, who develop rashes and skin irritations after they bathe or swim in the tanks or ponds, suffer the most. These tanks and ponds are fed by the groundwater of the area.

ON GOVERNMENT AGENCIES: At Patancheru, the APPCB has upgraded the ETPs and is monitoring some 150 units, besides recovering the Rs 1.5 crore (paid by the state) from the polluting units. The APPCB claims to be working hand in other regions too. "in the first week of February (1997), we had shut down the S 0 L Pharmaceutical Industry at Jeedimetla, Hyderabad, as it was discharging untreated effluents into an open drain, . states V P Jauhari, member secretary, APPCB. "It is not that the APPCB is not doing its duty," he adds. He claims that the city municipality had spent Rs 15 crore to divert two drains from emptying into the Hussainsagar lake. "All corrective measures take time and money, and the effort to cleanse this city of pollutants is certainly on."

However, officials cannot provide any satisfactory answer as to why such a situation arose in the first place; clearly, they failed in their duty, which is to ensure that an unit begins operations only after getting the necessary clearances.


The interim order has taken care of important issues such as treated drinking water for affected villages, and compensation for loss in agricultural yields. The court directives avoided harsh steps such as closure of the polluting units which would have compromised the livelihoods of the employees. By ordering installation of the CETP, the court had given a chance to limit the damage caused by polluting units.

But it is worthwhile to note that the water in Nakkavagu drain is still coloured, the groundwater still smells and it still remains brackish. While the APPCB claims that efforts to "cleanse industrial pollutants is on", the orders so far have not pulled up the board for its lackluster efforts. it remains to be seen whether the final decision of the court pins the responsibility on the guilty industry.