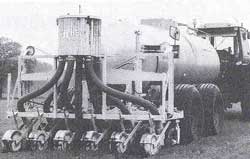 The national environmental act requires municipalities to deal with local problems, implement and enforce laws and, if a problem is too big, to refer it to the provincial authorities. As some environmental problems cannot be solved by a single municipality, they must be dealt with by provincial authorities. Such problems include air pollution, hazardous wastes and ground and surface water.

Environmental law enforcement involves a permit system incorporating procedures that include publicising the issue, holding a public hearing and permitting appeals. A mandatory time schedule exists for the permit procedure and a third party is free to object to an environmental ruling.

One of the oldest -- and still important -- pieces of environmental legislation in the Netherlands is the Nuisance Act, which is based on the principle that no one can be a nuisance to others. This requires everything -- from local shops to oil refineries -- to obtain a permit before beginning operations. The act, as a result, has evolved into a permit system covering all projects that have an environmental impact.

Important amendments to the act in recent years include the need to report changes in establishments that already have a permit and issuing permits on the basis of taking into account an establishment's future development. Enforcement options available to the municipality include requiring establishments to train their personnel to a daily fine of $5,000 and even closure.

The procedure for objections or appeal, set down in the general environmental act, requires permit applications to be published in the local paper, with residents living near the proposed project to be informed by letter. Objections must be raised within one month of notification -- and the objector is assured anonymity, if requested.

The municipality must decide on the application as soon as possible after the one-month period. Its decision can be appealed even by those who were unable to file objections within the stipulated period. Another important addition to the act is that it makes a permit-holder liable for damages to neighbours, even though the holder was acting within permit regulations.

Next to issuing permits, the area of greatest concern is control. Most municipalities in the Netherlands cover an urban centre and a rural environment and are responsible for preparing land-use plans for the rural areas. The plan must indicate the purpose for which the land can be used, what structures may be built on it, what development is permitted and what regulations would apply. A land-use plan has to be approved by the provincial authorities and eventually by the Crown, which acts on the advice of the national ministry for environmental management.


All municipality-prepared land-use plans have to be reviewed once in every 10 years. As the public has to be consulted before a land-use plan is updated, the municipality is required to publicise the draft of a new plan, mail basic information on it to rural residents and then hold hearings. A two-month period is set for these public hearings and for comments by individuals and non-governmental organisations (NGOs). After municipal authorities alter the draft plan, the modified draft must be made available to the public for two months for formal objections. Then, it can be finalised, but should an individual or NGO be dissatisfied with the final plan, an appeal can be made to the provincial authorities or even to the Crown.

Though such an appeal procedure implies delays of several years, this never happens because potential conflicts between economic and environmental interests are usually settled through consultations that are mandated by law. Because appeals are permitted, municipalities ensure the mandated consultations are carried out sincerely.

Because of these procedures, participatory democracy in setting local environmental issues is reasonably well secured in the Netherlands, especially as individuals do not have to incur payments to participate in the initial consultation or to file an appeal. In fact, the individual may even seek legal assistance.

W S Hulscher and P Landbergen are attached to the technology and development group of the University of Twente in Euschede, the Netherlands