Planting trees instead of feeding brahmins

Even death ceremonies in these 1,200 villages in orissa's Puri district have been transformed

Planting trees instead of feeding brahmins 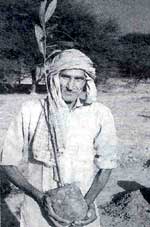 PURI HAS an NGO with a difference. Residents of 1,200 villages in the district have got together to form the Brukshya O Jeevara Bandhu Parishad (BOJBP) to protect their environment and devised quaint methods for ecological regeneration. Seedlings are demanded as part of dowry and planting trees, instead of feeding Brahmins, have become a part of death ceremonies.

Until 1940, the flora and fauna of the region around the 400 ha Binjagiri hillock, 14 km southeast of Nayagarh, was virtually undisturbed. The post-independence years saw rapid deforestation set in. By the late 1960s, Binjagiri was completely denuded. Streams dried up, firewood and water for irrigation became scarce and soil erosion resulted in reduced fertility.

The physical quality of life of the people in the surrounding villages, like Kesharpur, Nagamundali and Binjagiri, deteriorated with the ecological degradation. Illiteracy, malnutrition, malaria and hookworms became rampant. Narayan Hazari of Kesharpur, a reader at Utkal University, perceived the problem and wrote letters to the villagers of the area to save their land. But he was able to convince few, one of them being Joginath Sahu, headmaster of the middle school, who started an environmental campaign.

In 1976, the village of Kesharpur took the decision to protect a patch of the Binjagiri. The response was lukewarm till a National Social Service (NSS) camp in 1978 inspired the local people to more wholehearted forest protection.

With the regeneration of the patch protected by Kesharpur's villagers, the threat of pilferage by people from other villages loomed large. The only way to tackle the problem was to involve the other villages also in the programme. The environmental awareness campaign had already been initiated in the early 1970s in other areas through padyatras, slogans and meetings. As a result, seven other villages on the periphery of the Binjagiri took up forest protection.

Meanwhile, other hills like Malati near Manpur were also protected. In 1982, the NSS organised a workshop in the villages of Gamei, Nagamundali and Kesharpur which was attended by representatives of 22 villages. The workshop led to the formation of the BOJBP under the leadership of Joginath Sahu, Udaynath Khatai, a marginal farmer, and Vishwanath, a school teacher. The name of the organisation literally means 'friends of trees and living beings'.

Today, the BOJBP, through 13 related organisations, has mobilised community management of 16,000 ha of common property resources like forests and pastures in the area. It resolves conflicts within and between villages through mutual tolerance.

Traditionally, all the villages had local councils to manage common resources, like village schools, temples, common land, ponds, and so on. The BOJBP revived these councils. All the villages have ponds, mainly for domestic uses and pisciculture, which are also being managed by the village councils. They pay the fees to the panchayat from the village funds and arrange seed collection, distribution and sale of fish.

Similarly, common lands are cultivated by village councils on a sharecropping basis. The council selects the sharecropper and decides the share, which goes either to the village fund or the community paddy banks.

The village councils also have clear rules defining the rights and duties of the villagers. The forests are protected through a unique tradition called thengapalli (stick rotation). A particular household is assigned patrolling duties on a particular day by placing a thenga (wooden stick) outside their door the previous evening. The next day, the thenga is passed on to another household. The number of pallias (persons on duty) per day is determined by the village council and depends on the forest area and the external pressure on the forest patch. Every household has to take its turn.

Tree felling is prohibited in the forest. Even entering the forests with an axe requires prior permission from the council. The villagers can collect dry fallen twigs, fruits, seeds, flowers and cut shrubs identified for firewood. No grazing is allowed till natural regeneration takes place. Rotational grazing is practised in some villages. Collection of stones from the forest for construction is allowed only to actual users, not for commercial purposes.

Earlier, even roots were being dug up, but today, the villagers cannot imagine cutting down trees. With vegetation, wildlife has also returned to the forests which now have bears, rabbits, monkeys, pythons and storks and other birds.

But BOJBP's agenda goes beyond issues like afforestation. Family planning, employment generation, health care, sanitation, campaigns against untouchability and rehabilitating leprosy patients are also a part of its activities. Local dispensaries and schools, set up by the villagers themselves, testify to BOJBP's holistic vision.