Flouting laws, over 90 hotels have mushroomed on what once was a pristine beach in West Bengal 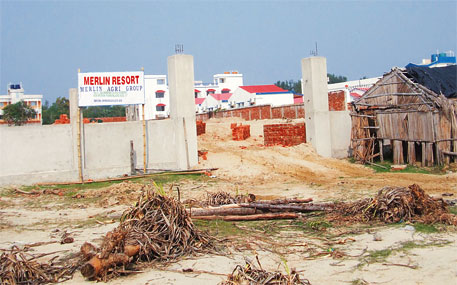 “Azure skies and golden sands await you and your loved ones, a short drive from Kolkata.” The voiceover, accompanied by stunning visuals, is from a TV advert for Rose Valley resort in Mandarmani, the new tourist destination in West Bengal’s East Midnapore district. What the voiceover does not reveal is that the luxury resort is one of the 90 units built on a once-serene beach without any permission from the authorities concerned. Besides violating the coastal regulation zone (CRZ) rules, the resorts have eroded the beach and taken away the commons of fisherfolk. Worse, the state government is reportedly planning to regularise them.

To make way for the resorts, companies flattened sand dunes as high as six metres and chopped down vegetation. “We did not know the resorts will destroy the sand dunes which protected us from the advancing sea,” says Saktipada Nayak, a fisherman. “The beach had three-to-four-hands-deep sand but now it is all gone,” he adds bitterly. Due to beach erosion, the fish landing centre has reduced from 16 hectares (ha) to 10 ha in the past 10 years. A decade ago, says Nayak, the beach looked remarkably different. “Millions of red crabs crawled on the beach—from a distance it appeared like a red carpet rolling over golden sand.” Today, the crabs have been relegated to a corner and casuarinas and screw pines have almost disappeared. Sandipan Biswas, president of the Hoteliers Welfare Association, agrees that the construction has damaged the sea coast.

But such is the influx of tourists that more parties are buying land in Mandarmani to reap benefits. Prices have reached Rs 50 lakh for a bigha (one bigha=0.16 ha) from Rs 40,000 in 2002. And the government seems to be welcoming the boom. The beach has been brought within the Digha Sankarpur Development Authority under the state’s Urban Development Department, tasked with drawing a development plan for the area. “We want Mandarmani to develop without violating the law; the challenge is to find a meeting point,” says Debashis Sen, principal secretary of the department. “Under the CRZ notification, there is a scope to reclassify the area as it is rapidly urbanising,” he adds. But this would not be easy. In 2006, the state pollution control board slapped a closure order on eight resorts, which had just opened or were under construction, for violating CRZ rules. A year later, its appellate authority recommended their demolition when the owners challenged the order. As per the notification, Mandarmani falls under CRZ I category—an ecologically sensitive zone in which no construction is allowed up to 500 metres from the point where the waves of the highest high tide reach. The government plans to reclassify the area as CRZ III or CRZ IV which allows some construction.

Two years after the demolition notice, the Calcutta High Court stayed further construction when the Hotel Owners Association asked for relief. But the order did not dampen the prospects of the industry. About 40 hotels are coming up on the beach. A night’s stay costs between Rs 2,000 and Rs 20,000. The prices are steep not only due to the proximity to the sea but because the resorts use diesel generators throughout the day. Pursuant to the board’s demolition order, electricity supply to the resorts was disconnected.

Another sticky point is that none of the hotels has been registered under the state pollution control board or the West Bengal Coastal Regulation Zone Management Authority. “The building plan and sale of land were authorised by the local panchayat which is not the legal authority,” says Sasanka Dev of NGO Disha, which has documented the impact of tourism on Mandarmani. Sitangshu Giri, head of the Kalindi gram panchayat for two terms, agrees to approving construction of 135 resorts beginning 2005. “Neither the state environment department nor the coastal zone management authority delineated or mapped the CRZ area. How are we supposed to know which areas are inviolate?” he asks. Giri, however, maintains silence on why resorts are being constructed despite a stay order.

After constructing close to the sea, resorts are facing its wrath. Debasis Shyamal, district member of the National Fish Workers Forum, recounts a 2010 incident when the high tide washed away a toilet and a sea-facing hotel room. Several resorts had their ground-floor rooms and front constructions washed away, he says. To dissipate the force of waves, the resorts are now building giant concrete walls and lining it with boulders. “Constructing walls might offer temporary protection but it will destroy the beach,” says Shyamal. “One has to let the sea water travel as far as it wants. The water loses its force and recedes, leaving the sand behind. With walls, the water rebounds and takes away sand by digging into the surface. This causes more erosion.”

Biswas of the Hoteliers Welfare Association suggests, “The state should speed up construction of the road to approach the resorts. Nearly all hotels are using the beach to ply tourists and supplies.” Referring to the damage done to the beach, a senior officer of the state environment department calls Mandarmani “murder on the orient express. Tourists will be sitting ducks if a cyclone hits the area”.