Flying GM pollen raises a range of concerns. These should be taken note of when going in for GM crops 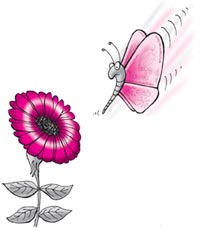 David Suzuki, a Canadian ecologist, has noted the key cause for environmental concern with GM crops: "The difference with this technology is that once the genie is out of the bottle, it will be very difficult or impossible to stuff it back. If we stop using DDT and chlorolofluorocarbons (CFCs), nature may be able to undo most of the damage -- even nuclear waste decays over time. But GM plants are living organisms. Once these new life forms have become established in our surroundings, they can replicate, change and spread, so there may be no turning back."

The other environmental concern is the possibility of a GM crop becoming an invasive superweed. Such invaders would not only reduce crop yields but could also cause serious disruptions in the functioning of natural ecosystems and losses in biodiversity.

It is important to know the history of domestication of crop species in a particular area to deal with the issue of pollination and with superweeds. Species with a short history of domestication need to be scrutinised because they are more likely to pose environmental risks. The isolation distances for various crops -- the distance that would restrict the transfer of pollen -- need to be determined and observed, though it is well nigh impossible to prevent pollen from escaping.

There are other problems with flying GM pollen as well. Four years ago, a study revealed how pollen from GM rapeseed in the UK was capable of killing the larvae of the Monarch butterfly. Though the study was hotly debated in scientific circles, it did highlight the risk of non-harmful insects getting affected by GM crops. And then there is the possibility of insect pests developing natural resistance to the GM toxin -- just as they develop resistance to chemical pesticides.

One way to deal with this problem is to maintain a 'refuge' -- a selected area in the field where the non-GM variety of the same crop is grown. This makes sure that the insects also feed on some plants that do not have the GM toxin. This slows down development of resistance. In a country like India, monitoring whether a farmer has maintained a refuge or no would be close to impossible, hence the task of monitoring would become even more difficult.

Another contentious question is GM crops irrepairably damaging crop-breeds in their 'centre of origin'. Most centres of origin of crops crucial for food security are in developing countries. These wild varieties are genetic repositories. For example, Mexico is to maize and papaya what South/East Asia is to rice and mango, and Peru for potato -- a centre of origin. Mexico had banned the cultivation of GM maize in 1998 to protect its native maize varieties. In 2001, a study showed how native varieties of maize in remote regions of Mexico were contaminated with traits common to GM corn varieties, including those of Monsanto approved for cultivation in the US. The study became very contoversial, but the Mexican government acknowledged the contamination in 2002 after its own studies.

There are thousands of rice varieties in the Chhattisgarh state of India, a veritable goldmine for favourable rice traits. Would pollen from GM rice pollute them? Scientists working on GM rice crops in India insist that the threat of genetic contamination of wild relatives of rice is highly exaggerated. They say the 'contamination' could've occurred with the hybrid varieties of rice developed through conventional breeding methods during the Green Revolution. Gene Campaign, a Delhi-based organisation working on biotechnology and farmers' rights, has been demanding an evaluation of the impact of foreign genes in rice. Should India avoid cultivation of GM rice when they are ready (research on GM rice is being carried out in several institutions)? Or should it avoid GM rice only in regions like Chhattisgarh, while allowing it in other states? Would that offer enough protection? How will transfer of seed/ pollen to the rice biodiversity hotspots be prevented and monitored, given the sad state of agricultural monitoring in India? These questions deserve to be addressed.