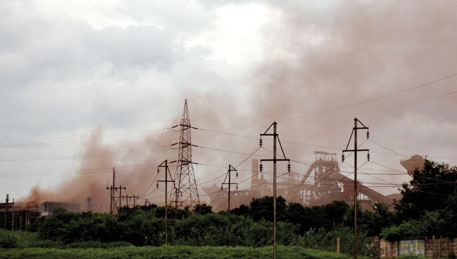 As the train slowly approaches Jamshedpur town in Jharkhand, the sky begins to turn reddish. It is because of the thick red dust emanating from an industrial unit, surrounded by heaps of industrial solid waste comprising unburnt coal char and flyash. The unit is a medium-scale iron and steel mill belonging to conglomerate Usha Martin.

Spread over 120 hectares, the mill became operational in Adityapur, a suburb of Jamshedpur, in 1974. It includes two mini blast furnaces, three coal-based sponge iron kilns of capacity 350-tonne-per-day and a steel-making unit with three electric arc furnaces. While sighting polluting sponge iron units in the eastern part of India is common, what is intriguing about the Usha Martin mill is that it received funding from the private sector development arm of the World Bank, the International Finance Corporation (IFC). 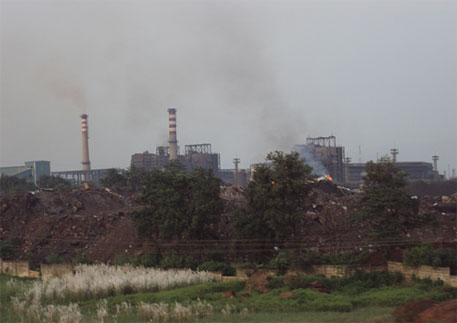 In 2002, IFC bought 14.5 per cent equity stake in Usha Martin—about (US $24.6 million). The money, as the IFC statement shows, was granted for setting up the sponge iron kiln along with a 7.5 MW power plant that uses waste hot gases from the kiln. At that time, Dimitris Tsitsiragos, the then director of IFC-South Asia, had said the company’s efforts “in the field of environment protection and social improvement in the region it is operating in are one of the factors that has made us invest in the project”. While approving the financing, IFC concluded that Usha Martin falls under the bank’s Category B of Environmental Impact scale for funding. This category refers to projects with potential limited adverse social or environmental impacts, which are generally site-specific, largely reversible and can be readily addressed through mitigation measures.

Pollution from the mill has disturbed lives of more than five nearby villages.

Tarak Nath of Jhurkuli complains thick red dust from the mill’s steel melting furnaces has been affecting all the 80 households in the locality. People, especially children, are suffering from respiratory problems. “There is no medical facility available. We have to go to the town for treatment,” Nath says.

The Sitarampur dam, a major water source, has been contaminated as the mill discharges untreated wastewater into the dam. Ganesh Mondal of Jhargobindpur village says the mill dumps its solid waste, generated from the kilns, near the main railway line, affecting lives of 100 households. “During rains, the heavy metals leach into the ground,” says Mondal. During nights, the extent of emissions is very high. “When we wake up in the morning, the entire village is covered in thick layer of red dust,” says Nath.

Many residents, who earlier used to depend on farming, are working in nearby industrial units, including the Usha Martin mill, as daily wage labourers. “Pollution from the Usha Martin mill has made the agricultural land unproductive,” says Mondal. People got jobs in the mill, but through contractors who take a larger share of money earned by the residents, he adds.

Occupational safety-related accidents occur frequently within the plant. Six workers have been reported dead in the plant since 2007 due to various accidents.

The emissions from the mill can be attributed largely to the electric arc furnace process as a proper secondary emission control system has not yet been installed. R N Choudhury, regional officer of Jharkhand State Pollution Control Board (JSPCB), Jamshedpur, says, “Repeated complaints have been received from residents on air, water and solid waste pollution, which were subsequently communicated to the mill through notices.” A show-cause notice was issued in January 2010 for non-compliance of the board’s consent conditions and for not submitting monitoring reports on pollution parameters conducted at JSPCB’s authorised, independent laboratories, he adds (see box: ‘Complaints against the mill’). Down To Earth found JSPCB’s regional office in Jamshedpur is functioning with skeletal staff and has dysfunctional laboratory. The mill is yet to take proper action in response to the notice.

Vijay Sharma, CEO and head of Usha Martin Jamshedpur mill, says the complaints have been attended to with seriousness. “Our steel melting furnace is more than 25 years old and has seen some short-term process changes leading to increased emissions. We will install high-capacity fume extraction systems by June 2012 for air emission control,” he says. With ongoing expansion to a million tonnes steel production annually by 2013, most of the generated solid waste is expected to be reused in the plant while remaining will be disposed of at a distant site in an “environment-friendly” manner, Sharma adds.

The mill’s 7.5 MW power plant is registered under the United Nation’s Clean Development Mechanism (CDM) scheme and is issued carbon credits. Clearly, the UN is ignorant of the ground reality. It does not perform basic environmental compliance check, one of the guidelines while issuing the credits. This is at odds with Rio Declaration’s Agenda 21 objective to minimise pollution. In a press interview last year when Thomas Davenport, director, South Asia, IFC, was asked to list good investments in India, he cited Usha Martin as a long-term equity investment. IFC continues to hold stake in Usha Martin.