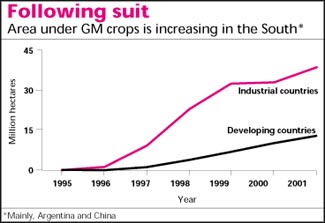 The United Nation Development Programme's Human Development Report (HDR 2001) Making new technologies work for human development, declared, "Biotechnology offers the only or the best 'tool of choice' for marginal ecological zones -- left behind by the green revolution but home to more than half of the world's poorest people, dependent on agriculture and livestock". Monsanto was naturally elated; civil society groups in the South incensed. This was a clear case of poverty being used as an excuse for profit-making. Anybody who understands poverty in the South knows that it is not due to a lack of food but due to lack of access to food.

Several studies were have begun to nail the lie (see graphs: Not for the poor, Whose concerns?, Where the seed has been sown and Following suit). Two of these were released recently: GM crops -- going against the grain by ActionAid and Voices from the South: The Third World Debunks Corporate Myths on Genetically Engineered Crops brought out jointly by Institute for Food and Development Policy and Pesticide Action Network, North America. The ActionAid report is a scathing statement. Here are some sobering snippets:

• It can cost up to US $300 million to develop a GM crop and the process can take up to 12 years. (Pose this against the HDR 2001 : "Traditional cross-breeding takes a long time, typically 8-12 years. Biotechnology speeds the process of producing crops with altered traits.")

• The four corporations that control most of the GM seed market had a combined turnover from agrochemicals and seeds of US $21.6 billion in 2001

• Six corporations own 54 per cent of US plant biotech patents

• Ten corporations supply 33 per cent of the global seed market, as compared to thousands of companies 20 years ago

• The main GM crops now being grown commercially -- maize, cotton, canola and soybean -- account for 99 per cent of all GM crops planted in 2002. Apart from cotton, these crops are used primarily for animal feed or processed foods

• Some GM crops on the horizon have the potential to devastate rural livelihoods by enabling corporations or farmers in rich countries to farm crops currently grown in developing countries, depriving export-producing countries of income and employment. Canola, for example, has been genetically engineered to produce oils that could replace coconut and palm oils grown in the developing world. 10 million families rely on coconut farming for their livelihoods. And then there are oil palm producers in Malaysia and Ghana

• Up to 1.4 billion people in developing countries depend on saved seed as their primary seed source. Up to 90 per cent of farmers rely on this system in Africa. They have complex systems for using, saving and exchanging seeds from one harvest to the other. Intellectual property rights and patents protect GM seeds. These are enforced by restrictive contracts that oblige farmers to pay a royalty, to agree not to save or replant seeds from the harvest, to use only proprietary chemicals on them, and to give the corporation access to their property to verify compliance.