The crash in potato price is triggering a wave of suicides in several states. Will the NDA government's ambitious Price Stabilisation Fund help farmers? 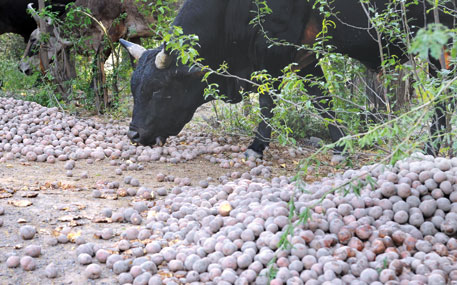 Soon after the National Democratic Alliance government announced its ambitious Price Stabilisation Fund to contain price volatility in the domestic market, the scheme faces its acid test. A bumper crop has led to a free fall in potato prices in several states this year. Between March 1 and April 4, at least 17 potato farmers in West Bengal, a major potato-producing state, committed suicide. Similar cases are also being reported from Punjab, Haryana and Uttar Pradesh. Will the Price Stabilisation Fund (PSF) be able to stabilise the market ?

With a corpus of Rs 500 crore, PSF has two objectives: one, arresting crashing prices of potato and onion through procurement during bumper harvests; and two, maintaining buffer stocks of the commodities to meet demand during the lean period.

While the procurement will be done by Central government agencies like National Agricultural Cooperative Marketing Federation of India Ltd (NAFED),buffer stocks will be maintained by the state governments. For this, a revolving fund will be set up to which PSF and the state government will contribute equally (the ratio of PSF-state contribution would be 75:25 in the case of north-eastern states). State and Central government agencies can also draw interest-free loan to support their working capital and other expenses on procurement, storage and distribution of the commodities. According to PSF procurement guidelines, these commodities would be collected directly from farmers or farmers’ organisations at mandis and made available at a reasonable price to consumers during the lean period.

Analysts appreciate the price stabilisation scheme for the country’s two most volatile commodities, but sound caution.

A senior officer of the Small Farmers’ Agribusiness Consortium (SFAC), who does not wish to be named, says: “If the government floats tenders for procurement, there is a high chance that private entities would lift the commodities from the market and hoard them. So it is imperative that only government agencies are roped in procurement.”

Others say the amount allocated for the fund is too little given the enormity of the problem. “Even Rs 5,000 crore would prove to be minimal for addressing the scale of such problem,” says Ashok Gulati, former chairperson of Commission for Agricultural Costs and Prices. The fund would be highly insufficient in the event of a huge price crash, says the SFAC official.

“In 2006, the fourth report of the National Commission on Farmers had recommended setting up such funds to protect farmers from price fluctuations, but only for crops, such as cumin that are crucial for survival in arid areas,” says Ramanjaneyulu G V of Centre for Sustainable Agriculture, Hyderabad. It seems by setting up PSF for potato and onion—the two politically volatile commodities—the government plans to avoid fixing the minimum support price (MSP) of crops. Only MSPs of potato and onion can help save farmers, he adds.

Analysts are also questioning the timing of introducing the scheme. The NDA government had announced PSF scheme in its first budget in July 2014. It was also part of the election manifesto of the Bharatiya Janata Party. Then why did it delay rolling out the scheme? asks food and agriculture analyst Devinder Sharma. Market prices of onion and potato were high last year. This prompted farmers to increase acreage of potato and onion which flooded the market and caused the price crash, says Sharma. He alleges that the government had sensed that the prices of onion and potato would crash before it came to power.

There is scepticism about PSF’Ssuccess. “PSF will certainly protect farmers from distress selling. But the moot question is how it will be implemented,” says Gopal Naik, who teaches agro-economy at the Indian Institute of Management, Bengaluru. He cites the PSF for tea, coffee, rubber and tobacco. In 2003, the Union Ministry of Commerce and Industry set up the PSF with a corpus fund of Rs 500 crore when international prices of the commodities were declining. They were well-off farmers and it was easier for them to get help. So the scheme was a success, says Naik. “But in the present case, we do not know the exact number of affected farmers as well as the number of small and marginal farmers in the country,” Naik adds. “Besides, PSF is not a self-sustenance model where the government puts funds and the affected community manages it. We have to look at sustainable models of different countries.”

Naik cites the US as a model, where producers keep one per cent of the total sale proceeds as price stabilisation funds. They use it during distress sale with the help of the government.

Ramesh Chand, an agro-economist and director of the Centre for Social Development in Delhi, agrees that price stabilisation should not be entirely left to the government, especially for horticulture crops that are mostly farmed by well-to-do farmers. Any scheme, be it PSF or insurance, which aims at providing financial relief to growers at a time when prices of these commodities fall below a specified level, should be participatory, he suggests.

Not all think PSF as a viable solution. Price crashes are just the symptom of a deeper malaise, points out P S Birthal, principal scientist at the National Institute of Agricultural Economics and Policy Research. “I don’t think PSF would help much. Even during distress selling of potato for Rs 1 and Rs 2 a kg, the market price is eight to 10 times higher. It shows there is a serious problem in the supply chain. It is time to iron out flaws existing in the supply chain instead of opting for the procuring method,” he says.

Gulati says the government should look for long-term solution to protect farmers from distress selling. “We should start linking food processing industries to farm producing organisations and encourage contract farming,” he suggests. So, will PSF be viable for farmers? The jury is still out on that one.