Power of the people

As megacities across the world boom, simple pleasures of life like fresh air and clean water have been lost. Initially, governments tried to check the damage without public interference. They failed. Today, the people are exercising their clout to safeguard the environment

Power of the people 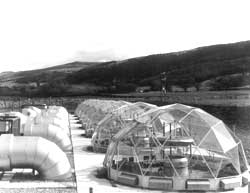 SIX years of research and policy experiments, and first hand observation by the World Bank has revealed that many industries in poor and developing countries are running cleaner than a decade ago. A World Bank report titled Greening Industry: New Roles for Communities, Markets and Governments states this trend is good news for some of the world's poorest people. Considering that the developing countries have recently started to industrialise, motorise and urbanise, this study is in contrast to the general perception that development means pollution.

Interestingly, this achievement in controlling industrial pollution is not the result of government involvement but due to the participation of local communities, non-governmental organisations (NGOs) and the market. Unfortunately, in many developing countries, policies and institutions to control pollution and degradation of the resource base are weak and still in a nascent stage. Monitoring mechanisms are often not effective because of poor availability of financial and human resources, bureaucratic inertia, and lack of transparency and public accountability. This command and control form of governance - enacting laws and then setting up institutions to implement the laws - had indirectly given industries the license to pollute.

However, recent evidence suggests that having realised the inadequacies of the command and control mechanism, a growing number of developing countries are adopting the community based approach to control industrial pollution. These nations use the combined power of local communities, NGOs, stock markets and the media to check water and air pollution by industries. This step has proved more effective in curbing pollution than the conventional methods, like industries setting up effluent treatment plants (ETPs) after much prodding by the government.

In the early 1990s, the idea of regulating pollution by setting emission norms and standards was imported to the developing nations from developed countries without considering the ground realities. Governments were quick to adopt the mechanism. Unfortunately, the concept did not work well in the local conditions. Regulators in many developing nations soon realised that conventional methods were beyond their means and ineffective. It was then that the innovators started experimenting with new methods of controlling pollution.

"The World Bank has been very fortunate to collaborate with the pioneers of this new approach, in which communities themselves negotiate with polluting factories to achieve clean air and water," says David Wheeler, a senior World Bank economist and author of the Greening Industry report. Wheeler and a World Bank team collaborated with pollution regulators in developing countries like Brazil, China, Indonesia, Colombia, Mexico and the Philippines in implementing the new community-based model.
The World Bank report describes the fresh approaches and efforts made by the pioneers of this latest model as new allies in the battle to curb pollution after the 'command and control' theory of pollution control failed. Advocates of the new model are opting for a more flexible and efficient system that provides strong incentives for polluters to clean up. Some countries impose financial penalties like charging the polluters for every unit of pollution created by them. These pollution charges not only help reduce pollution but generate public revenue as well, which in turn can aid local efforts to control pollution.

Where enforcement agencies are weak - as they are in many developing countries - polluters run little risk of being caught and punished. Therefore, any polluting industry that violates pollution standards, faces little compulsion to adopt cleaner methods of production. On the other hand, industries that do not respect legal statutes are even less inclined to cut their pollution. To address these limitations, the new approach as figured out in Greening Industry combines market based incentives and public information disclosure to induce factory managers to improve their environmental performance while pursuing profits.

In some countries, local representatives join government regulators and factory managers at the negotiating table to decide on the policies to be framed and to set pollution standards that are required to formulate strategies and disciplinary measures to ensure that the standards are met. On the other hand, there are countries where public disclosure of a company's performance enables consumers, stockholders and investors to judge its environmental commitments. This judgement affects their decision to buy a product or invest in or trade the share of that company.

For instance in India, it began with the initiative taken by the Centre for Science and Environment (CSE) to start rating industries in the country on their environmental performance. Though the initiative in its initial phase did not fetch an encouraging response from industry, but eventually, realising the importance of public image, most of the industries came forward to participate in the project. As pilot project, CSE rated the Indian pulp and paper industry since the sector is one of the most polluting and had a lot to hide. The basic aim was to make the people aware of industries that are environment-friendly and those that pollute. This enables the public to formulate strategies and act together to pressurise these industries to clean up their act. As is apparent, in this model the pollution regulation method is information intensive and transparent. The best results of the new 'model' approach were seen in Indonesia.


In Indonesia's 'Proper' programme, government officials rank water polluters using colour code. Black is for factories that make no attempt to control pollution and cause serious environmental damage; red for those that have some pollution control but fall short of compliance; blue for those that meet national standards; green for those that are much cleaner than required and gold for World class performers, but no factory has earned it yet.

In a pilot study before the 'Proper' rating began, out of the 187 large polluters, two-thirds failed to comply with Indonesian regulations. The remaining one-third was in compliance, despite the government's weak enforcement capacity, because the markets and communities had pressurised them. Regulators in Indonesia hoped that better information would increase public pressure on industries to improve their environmental performance.

To increase the incentive, officials organised a high profile awards ceremony to felicitate five top-ranked 'green' factories and privately notified the polluting factories of their grade and gave them six months to clean up. As a result, water pollution from 187 pilot plants fell by 40 per cent. Success of the Indonesian Programme has caught the attention of regulators and NGOs in China, India, Mexico and the Philippines where similar programmes have been experimented with or are underway.


In few countries where the government provided local communities with reliable pollution data, people living in the vicinity of the offending industries have been able to negotiate better arrangements for compensation and clean up. Greening Industry report emphasises on the impact of public disclosure in curbing pollution in developing countries.

The stock market investor, surprisingly, can also be an important ally in controlling pollution. Markets may view high pollution level as evidence that a firm's operations are inefficient, and may raise concerns about financial liabilities and penalties. On the other hand, research shows that media coverage of good environmental performance - such as investment in cleaner technology - can enhance a firm's expected profitability and stock value.

The Philippines stands as a best example of this impact. Share prices of beer manufacturer San Miguel shot up nearly 60 per cent when environmental regulators highlighted the firm's green record and the installation of new pollution control equipment. On the other hand, share prices of Kimberly Clark, a paper manufacturing unit in Mexico, US, fell by nearly 50 per cent after the government levied substantial fines for violating water pollution regulations. This is yet another way to penalise polluting industries: by levying pollution charges. Instances in Colombia, China and the Philippines show that industrial managers embrace stringent pollution control measures when they face exorbitant charges for causing pollution.

Economic reforms can also help in curbing industrial pollution. Greater transparency in trade can spur commercial access to cleaner technology. State-owned enterprises are often heavy polluters and privatisation often results in cleaner production. Countries such as China, Indonesia and Brazil have demonstrated the power of public disclosure to reduce pollution. "Greening Industry is really their story - and it is a hopeful story. We believe that environmentally sustainable industrial development is within reach," says Wheeler.

Reported by Richa Shukla The story is based on the World Bank report titled Greening Industry: New Roles for Communities, Markets and Governments