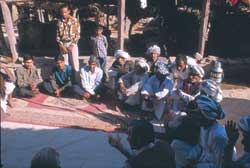 Heads of panchayati raj institutions have aggressively set the government a deadline to amend the Indian constitution and implement changes that would forcibly impact and empower Village India.

It would give villages control over natural resources like water, minor forest produce and minerals, which at present lies with the state government. The deadline expires on December 31, 2002.

On April 5-6, an all India conference of heads of Panchayats was held in Delhi. The prime minister, the leader of the Opposition, the rural development minister besides the deputy chairperson of the Planning Commission and half a dozen other key Union ministers trooped down to Talkatora Stadium in Delhi to listen to the panchayat heads.

These representatives of Village India demanded from the Union and state governments, complete devolution of administrative and financial power to them as entitled by the 73rd and 74th amendments to the constitution in 1992.

The government had amended the Indian constitution, ten years ago, to confer power and authority on the Panchayati Raj institutions (pris) at the village, block and district levels.

To rectify this, heads of panchayati raj institutions throughout the country have demanded a constitutional amendment. Today this lowest rung of democracy is at the gates of change, pushing for second-generation reforms.

The prime minister Atal Bihari Vajpayee and his colleagues in a rare show of consensus admitted that the panchayats, the last in the hierarchy of democracy, had been ignored and failed to carry forward their constitutional mandate. "After 10 years of the Panchayati Raj we need to retrospect," Vajpayee said.

The prime minister initiated the move to amend the constitution for effective and speedy devolution of financial power and administrative control to pris.

The proposed constitutional amendments may make possible a direct flow of funds from the Centre to the pris. It may make it mandatory for the state governments to devolve certain powers to the pris.

A set of demands termed as 'national declaration' has been given to the Union and state governments to be met by December 31, 2002 (see box: D-list ).

The declaration demands pris control over natural resources and constitutional amendments to ensure speedy and effective devolution of power.
This conference brought into focus two major issues that have been nagging the pris in the country: devolution of power from the state to the pris and internal resource mobilisation capability of the pris for functional autonomy.

Surprised at the disparity between pris lofty goals but low financial strength, Vajpayee stated, "Zimmedari hai, jeb khali hai ." He averred that "panchayats should be given a monetary uptake for development projects, just like local development funds, given to members of Parliament (mps) and members of the Legislative Assembly (mlas).

Agreed M Abdulahkutty, panchayat head from Malapuran, Kerala. " mp and mla local area development funds should be transferred to the panchayat. Why should they be allowed to spend such a huge amount arbitrarily?" he asked.

M Venkaiah Naidu, the Union rural development minister, admitted that pris had not got the attention they deserved. However, he mentioned that pris, as the carrier of development programmes, would get priority in the 10th plan.

It is indeed true that pris have been ignored for a long time. A study of Panchayats in 19 states, carried out by the National Institute of Rural Development (nird), Hyderabad, shows that cutting across party lines, there is a lack of political will to devolve power to the pris. This has affected their effectiveness (see box: Panchayati raj: Responsibility sans power ).

The state governments have the power to make laws regarding the devolution of power upon panchayats. This role of states in granting power to pris came under heavy criticism during the two-day conference.


While the constitution gives legislative support to the pris, the real transfer of power has been left to state legislatures according to area-specific needs. The 73rd and 74th constitutional amendments gave pris authority to independently manage 29 social sectors including public health, education, water, fisheries etc., but did not define the degree of power to be transferred.

This allows state governments to block transfer of substantial power to the pris. For example, Ram Karan Bhanwar, district panchayat head from Indore, Madhya Pradesh, states, "The Zilla Parishad is a toothless body. For instance, we keep records of teachers' absenteeism from the class but have no powers to transfer the erring teachers."

K C Pant, deputy chairperson of the Planning Commission admits, "Effective power devolution has not taken place as a mandate. It is dependent more on political will. In case of a good chief minister, pris are comparatively better empowered."

Most states therefore have the basic legal framework that has established pris and transferred various departments to them. But states have not supported this devolution by formulating relevant rules or guidelines enabling the pris to manage it.

For instance, pris do not have the necessary funds to run these departments as the state government has transferred the responsibility but not backed it up with transfer of funds or even a modicum of financial control.

For instance, Rabi Narayan Jena, panchayat head from Birdi, Jagatsinghpur, Orissa states, "when a gram panchayat or zilla parishad makes projects, it does not get the funds it demands."

Under article 243-H of the constitution, state legislatures have been given the mandate to enact laws that would allow pris to levy taxes, duties, toll and fees. This would make pris less financially dependent on the state and minimise control from the state government.

This has, however, not been done. On the contrary, various laws give the government control over almost all functions of pris. It even allows any whimsical state government to dissolve pris. Thus pris function at the mercy of state governments.

The conference in its national declaration demanded non-budgetary resources in the form of loans with long maturities to pris, specifically to be used for developmental projects planned and executed by pris themselves.

Interestingly, the Panchayati heads also demanded control over land, water, minor forest produce (mfp) and minerals. Though these sectors should be constitutionally controlled by the pris, these remain under the control of the state government, probably because these are major sources of state revenue.

Only limited access or control has been granted to the pris. For example, in Orissa, the right to all money fetching minor forest produce remains with the state government even though it has transferred 65 mfp rights to panchayats.

In addition, a number of village level users' groups have been formed under different development programmes of the state government. For example, watershed development committees, water users' groups, women self-help groups, the forest protection committees, all of which function independent of the pris but share the same subjects.

No effort has been made to link them to the panchayats despite being implemented by different government programmes. As a result, panchayats have been marginalised. The panchayat heads demanded bringing all these parallel bodies under their control. Sonia Gandhi, the Opposition leader also supported this demand.

"We need to direct attention to the issue of financial decentralisation," said Naidu while the Union law minister Arun Jaitley dropped sufficient hints about such a move being contemplated. He said, "The proposed constitutional amendments will deal with this."

The National Commission to Review the Working of the Constitution also favours power for the panchayats. The prime minister's proposal of directly dealing with the pris and bypassing the states to reach panchayats indicates a major change in the financial and administrative profile of the local bodies.