The Kyoto Protocol could save the industralised North from taking action to reduce its own emissions. A cheaper and easier option is available to them: striking a deal with the poorer South 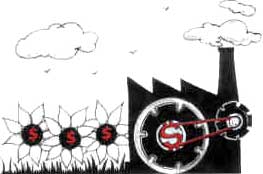 A FEW months prior to Kyoto Protocol in 1997, the US Senate passed a resolution to ratify a protocol in the Climate Change Convention "all nations should be required to act within the same time frame". The Senate resolution was substantiated by the US delegation in Kyoto with frequent references to a need for "meaningful participation from developing countries".

The American position, backed by the multimillion dollar domestic industries and media campaigning, is a serious attempt to modify the key principle of "common but differentiated responsibility" of the member states. It is an arrogant attempt to once again divert attention from the action that is needed to be taken in the fossil fuel-dependent North. At a point in time where the US has with great hesitation expanded its vocabulary to including the word "mitigation", it seems rather premature to turn the attention towards the emissions of developing countries.

The CDM, in particular, may open the door to increasing involvement of developing countries in combating emissions. The CDM, as proposed by Brazil, was meant as a mechanism to impose financial penalties upon countries which did not balance their emissions budget according to their mitigation commitment under the protocol.

Inter-governmental negotiations on greenhouse mitigation look more like a plan to create markets, private sector involvement, and carbon colonies than an effort to reduce fossil fuel reliance in the North. Is this really the way forward for combating climate change, for developing socially, politically and ethically sustainable relations between North and South?

To answer such questions, the South needs to get much more actively involved in the international politics on climate change. Developing countries in general have a tendency to respond and react rather than propose or direct the international negotiations on climate change. As a group, they have seldom been able to act as a consistent coalition in the negotiations. In future years, a country like Brazil is particularly likely to separate from the G-77. The Brazilian energy sector relies heavily on hydro-power. Consequently, Brazilian officials are more open to American pressure that "we must have meaningful participation by key developing countries" than their Indian, Chinese or Mexican counterparts.

The US, by bringing on board the Brazilians and with the help of the Japanese, Australians and maybe the Canadians, will eventually bring the focus of negotiations into that of debating actual mitigation commitments by major developing countries.

In general, governments in developing countries are not in a position to counter-react to such pressure. In many developing countries, climate change competes with a number , of pressing problems such as poverty, economic crisis and political disorder. Political attention is, therefore, mostly absent when it comes to climate change. National position on climate-related topics are often foreign policy rhetoric rather than actual political insight into the topics at stake. Poorly prepared governments leave much responsibility to domestic scientists and environmental groups.

Internationally, research on climate change has largely been dominated by North American and West European scientists. In most developing countries, research remains consistently under-prioritised and under-funded. Those researchers who do have funding are those adhering primarily to an agenda set by foreign (North) rather than domestic priorities. Much research is as such clustered around n and tradable permits. This is rather astonishing, when the opposition to these forms of implementation by the South are considered.

Fragile domestic research coupled with a general lack of political attention and sparse debate among major domestic stakeholders leave the contours of many developing governments' national position, by and large, determined by external forces. This places developing countries at a major disadvantage in international negotiations. A comprehensive and careful preparation of a national position demands not only political attention but also substantial domestic science, money and thorough dedication and debate. A lack of most of these leaves them with severe handicaps in international negotiations. So far, the concerns of the North have dominated the negotiations and the South has only reacted to these proposals.

With major developing countries remaining severely handicapped and ineffective, negotiating partners unwilling and unable to forward their position as nothing but a foreign policy rhetoric, sustainable inter-governmental solutions for addressing the problem of global climate change are unlikely to occur.

Susanne Jakobsen is a scholar of global environmental politics, University of Copenhagen, Denmark