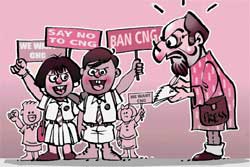 But then why demonstrate in front of the Supreme Court? A dharna of schoolchildren in front of Naik's and Khanduri's ministry would be equally photogenic. And it would put some pressure in the right place. Many school principals in Delhi are clearly not convinced that clean air is a priority for children. Ministers and babus will soon become "Dust into Dust, and under dust, to lie, Sans Wine, sans Song, sans Singer, and -- sans End!" as Omar Khayyam once put it so beautifully. But children have a long shelf life which needs to be protected with great care. They need clean air most of all, especially as they are in the most vulnerable stages of their life. This is what a us study has to say about schoolchildren traveling in a diesel bus: "A child riding inside a diesel schoolbus may be exposed to as much as four times the level of toxic diesel exhaust as someone standing or riding beside it. These exposures increase the cancer risk by 23-46 times."


Two incidents of fire and explosion in the city just prove how complacent the ministry of road transport and highways (mrth) has remained with respect to setting appropriate safety and emission norms for cng vehicles. There are no comprehensive, legally enforceable rules to govern the safety of cng vehicles plying on Delhi's roads. Even worse, a safety inspection system for cng vehicles is still not in place. This is three years after the July 28, 1998, Supreme Court order and over 40,000 cng vehicles plying on Delhi's roads.

Even the emissions standards notified for cng vehicles are so weak that they allow very poor technology to come onto the roads. The current cng emission standards do not recognize that cng is a very clean fuel compared to diesel and can meet much tighter emission norms than the current standards for diesel. mrth rules require buses converted to cng to meet emission standards meant for diesel and petrol vehicles in their year of manufacture. In other words, a 1990 diesel bus converted to cng must only meet the emission standards of a 1990 diesel bus. The ministry is currently making a second attempt to modify the existing standards to address some of the flaws. But even the new draft notification is too weak to address the existing flaws.

With respect to safety, no provisions have been made for the inspection of in-use buses after conversion to cng . Each and every converted bus should undergo inspection of the engine and high pressure fuel storage and piping systems before being allowed onto the road and then a safety check needs to be carried out every year.

These flaws were exposed when cse conducted an independent assessment of the existing cng technology and regulations with the help of international experts, which it has just released. It has sent its objections to the draft notification of the mrth seeking an amendment to its earlier notification on cng emissions standards.