Profit from an acre

Profit from an acre 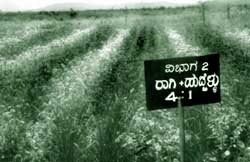 In the tiny village of Dasayanadoddy in Tamil Nadu's Krishnagiri district, thirty-five families farming meagre plots of groundnut and ragi barely keep their hearth fires burning. However, a lone farmer's experimentation on his one acre (.4 ha) land has entirely reversed his fortunes.

In 2004, Jayadeviah S decided to branch out from ragi and groundnut but had nothing to invest in his land. Then he heard of the integrated farming model, a watershed scheme requiring minimum investment, being developed at the agriculture research station of the University of Agricultural Science (uas), Chikmagalur, Karnataka. Some fifty-odd marginal farmers across the state have adopted this practice.

The key to the model is the fulfilment of various needs on a single acre. Timber, cereals, pulses, oilseeds and vegetables are brought together in a variety of cropping systems to provide the household with all its needs. Additional activities such as dairy, poultry and apiary farming augments income, and the self-sustaining model ensures that manure and seeds are produced on the farm.

After a short training at the uas, Jayadeviah began with a rainwater harvesting system, digging a pond and constructing bunds to prevent runoff. He planted casurina and silver oak trees, both to fence his land and provide timber; with help from a local non-governmental organisation, Green Foundation, Jayadeviah built a biogas plant. The plant today supplies cooking gas and even lights his hut.

Dividing his single acre into five sections, Jayadeviah planned out his farm. "The key, I realised, was to have diversity in cropping to meet all our household needs. I needed to put in only Rs 500 for seedlings." The innovative farmer went ahead with his compact and efficient layout. In the first segment, he planted fruits: tamarind, gooseberry mango, jackfruit and horsegram. In the second he sowed 350-kilogramme (kg) of ragi and 100-kg of red gram; in the third, pulses and in the fourth vegetables. The fifth section contains his hut, biogas plant and pond.

The vermiculture and compost produced by his farm fertilises his fields; Jayadeviah got a loan of Rs 20,000 from the Chennai-based Tamil Nadu Coconut Development Board to construct the stone walls of the vats. Wastes and crop residues are mixed with biogas slurry to form compost.

Jayadeviah's hearth is burning well. He made Rs 10,000 in the first year from the sale of seedlings, vegetables, compost and apiary. "Of that Rs 4,000 came from the sale of honey, banana and cardamom," he says. "There is lots of money coming in from vermicompost. I get Rs 300 a month by just selling drumsticks," he exults.

The creator of the model farm, Rudraadhya M of the uas' agriculture research station, claims that it's possible to make up to Rs 25,000 in the first year. "Incomes can even go up to Rs 50,000 by the third or the fourth years. It has happened in my farm," he says.

Jayadeviah now owns three cows and six apiary units, and has extended his plot by two more acres. He has six to seven varieties of brinjal, seven kinds of banana, sweet lime, vanilla and indigo, and plans to continue extending his crops, reducing ragi cultivation and enlarging his nursery as his sale of seedlings grows.

Most importantly, Jayadeviah is nearly self-sufficient. He and his wife are the sole labourers, and as he now produces not just crops but inputs like manure and seeds, his dependence on outside markets is reduced to a minimum. "After four years, even if I stop cultivation, I will still get fruits and vegetables for my use and for sale," Jayadeviah says.

Unfortunately, Jayadeviah's success has not set much of precedent in Tamil Nadu. But in neighbouring Karnataka, the department of agriculture is giving subsidies to marginal farmers with 2 to 2.5 acres each, to help set up model farms.