Puppeteers on a chain

Puppeteers on a chain 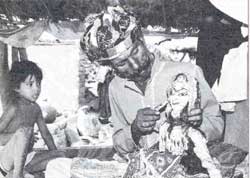 Young Om Prakash sells stolen pups for a living. His father, Jarnail Singh is a skilled puppeteer from Naugaur, who had performed in the USA in 1985 as a member of the delegation for the Festival of India. But Om Prakash has given up his ancestral art: "Puppetry is an unstable profession today," he says. In fact, many of the younger generation of residents of Kathputli Nagar (literally, Puppeteers' Town), in West Delhi have taken to theft, pickpocketing, even pimping as their last resort to survival.

There are people, like Bala Bhatt, living in here, who have toured 7 countries with their art. But today they depend upon the occasions of the rich -- marriages and birthday parties -- that too mostly in the winter season, for their survival. For the rest, they have to look for other means of earning their keep, like Billu Ram, who is sometimes an autorickshaw driver, sometimes a volunteer for a research agency.

Ram Kumar Ankala has given up making puppets: "For whom will I make puppets when puppetry itself is dying?" The residents' dream, the Bhule Bisrey Kalakar Sahakari Samiti (The Forgotten Artistes' Society) had been registered in 1986, but now lies defunct. There is no one they can bank upon today. Their village chief is now locked behind bars for some petty offence, and the MLA of the area, Mewa Ram Arya had first and last visited the village just before the elections.

The puppeteers in Kathputli Nagar had migrated to Delhi from the drought-stricken Naugaur and Shekhawat in the late '50s. The government's propaganda machinery had supported them for a while, using them to spread social messages. They finally settled down 30 years ago in this town of dying puppets.

The economic ruin has torn asunder the community from within. The elders, like Bhatt are angry with the young. "They don't belong to our community any more," he spits out. On the lane 3-year-olds play on an old trolley. They are eager to shake hands with the well-dressed visitors who sometimes descend on their colony for "the upliftment of the poor". But with the younger generation already having gone haywire, is their any future at all for the kids?

Gayatri Rath is a journalism student at the Indian Institute of Mass Communications, Dhenkanal