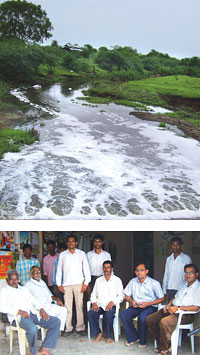 Sevagram ashram in Maharashtra where Mahatma Gandhi spent many years of his life is threatened by pollution.

Effluents from a pig iron plant are flowing in the drain passing through the ashram complex in Wardha district and have contaminated the groundwater. Villagers have stopped using the well in the ashram, said Jalandhar Nath, a resident. The air quality too has deteriorated, he said. The plant was built by violating a number of rules.

Its chimney has been spewing smoke for four months. “The company, Uttam Galva Metallics (UGML), says it is holding trial runs. But trial cannot go on for months. Production has started,” said Yamini Gajpure of Rashtriya Yuva Sangathan, a non-profit in Wardha. The plant violates a Maharashtra government directive of 1994, prohibiting polluting industries within 10 km radius of Sevagram. It is just four kilometres from the ashram which houses, among other buildings, Bapu Kuti, where Gandhi spent his last years.

UGML built the pig iron plant under an agreement with Lloyds that runs a steel plant in Bhugaon near Pune. The 0.4 million-tonne capacity steel plant too was built in violation of the 1994 prohibitory order. The project was cleared by showing it was 12 km from Sevagram; the aerial distance is four ki lometres and the state order specifies distance should be measured aerially. “At that time the public and politicians favoured the plant, believing it would bring development,” said M M Gadkari, president of the Sevagram Ashram Pratishthan that had opposed the steel plant.

In 2005, Lloyds proposed expansion of the plant to one million tonnes and addition of an 80 MW captive power plant. The Union Ministry of Environment and Forests cleared it. In 2007, instead of undertaking the extension on its own, Lloyds roped in UGML. In July 2008, the Maharashtra State Pollution Control Board (SPCB) gave the expansion project ‘consent to establish’ on a 24.3-hectare (ha) plot adjoining the steel plant in Bhugaon.

But UGML had started constructing the pig iron plant in Barbadi village (three km from the steel plant) four months before the SPCB approval. This violated the consent order.

There are other violations too. UGML acquired 73 ha farmland in Barbadi. It needed 57 ha more. It met its requirement by encroaching on land earmarked for a residential estate. People who had purchased plots to build houses had no option but to sell their land to UGML.

Ajay Jagtiani, one of the aggrieved plot-owners, decided to fight back. He took the Right to Information (RTI) route to dig out more violations. His findings: UGML never applied for environmental clearance from the Centre; the tehsil office said the plant did not obtain mandatory clearances from the district collector, town planning office, the gram panchayat and the departments of industrial safety and health; the tehsil office did not have records showing UGML owned the project site.

Public protests have proved futile so far. SPCB filed a report saying there was no pollution from the plant when President of India’s office sought an explanation following complaints. “The report is based on a three-day monitoring of air quality (July 7 to 9) and it rained on all three days. Groundwater quality was not checked at all,” said Vivekanand Mathne, convener of the people’s front, Sarvodaya Mandal Andolan Samiti.

In September, Union minister of state for environment Jairam Ramesh said the ministry would put stringent conditions while clearing the plant. “The statement makes it clear no action will be taken against the people who committed the crime,” rued Mathne.