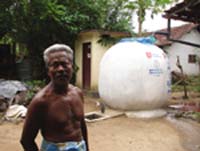 TWO years after the Asian tsunami, as the images of devastation fade off from global public memory, the disaster persists for villages along the coastline of Sri Lanka's Southern Province. Survivors here have new houses, boats, fishing nets and roads, but face a severe scarcity of drinking water. Unlike flooded areas in the eastern coast of Sri Lanka or Tamil Nadu in India, groundwater in this region remains highly saline and unfit for drinking (see box Salt of the sea). Traditionally, all along the coastline, people have always depended on dugwells for their water requirements. The National Water Supply and Drainage Board started supplying water to affected people using tankers, but it turned out to be an unsustainable practice. "I pumped out the saline water from my well, initially hoping to get fresh water. But it did not help. So, I abandoned my well," said Suwanaries W B of Palana village in Weligama.
But Suwanaries's water woes are over. He is now the proud owner of a 5,000-litre rainwater harvesting tank. Knocking on the ferro-cement body of the tank, he says it has already collected 1,500 litres, a mere week's mild evening rains.The bright idea of rainwater harvesting came during a post-tsunami meeting on the drinking water problem. "It was not possible to supply clean drinking water in tankers to the villages forever. And we found out that digging the wells deeper did not bring better water. We had to think of an alternative option," says Tanuja Ariyananda, director of Lanka Rainwater Harvesting Forum (lrhf). The forum, used to promoting and implementing rainwater harvesting all over Sri Lanka, suggested this method in a scaled up version as a sustainable and economic option for drinking water.
Among the donors present in the meeting, unicef liked the idea and requested the forum for a detailed proposal. The plan included installing water harvesting systems for 3,000 households in Galle, Matara and Humbamtota districts of Southern Province, along the coast. The system was simple catching the run-off from the rooftop and collecting it in cylindrical ferro-cement tanks above ground. Research into rainfall patterns and average household size determined the size of the tanks. Galle and Matara districts have an average of 3 dry months, so tanks with a capacity of 5,000 litres were to be installed. In Humbantota district in the east, where the dry season is 5-6 months, tanks would be larger, holding 8,000 litres. The programme started in March 2006 from Galle district in the west and has moved to Matara district by now, where the 700th system is already in place. All 3,000 systems will be in place by 2009.

lrhf builds the systems, also spending on skilled labour and material. A 5,000 litres tank costs 25,000 Sri Lankan Rupees (us$250); the 8,000 litre ones cost 33,000 Sri Lankan Rupees (us$330). unicef provides money to make the system; expenditure on administration and capacity building is funded by Malteser International, a German donor ngo. The management process is participatory in nature. Every household wanting a system must agree to supply all unskilled labour and a future committment on operation and maintenance.
Originally, while the donors and the state water supply board were excited about fighting saline groundwater, people were skeptical. "Are you sure we can drink that water?" was the common refrain, as the forum held meeting after meeting in villages to promote the idea.Ariyananda recounts most villagers in Galle, the first district to be covered, were highly skeptical, and simply refused to install the systems. "Now that it has been widely accepted and the project has moved to Matara with much popularity, villagers in Galle are asking us to get back there," she exclaims victoriously.

It was an uphill task to convince villagers to accept the system as a clean and safe drinking water option, one achieved through numerous awareness meetings. After such a meeting, forum workers would conduct a household survey, followed by a village level meeting where households formally consented, also promising unskilled labour, land for the tank and future maintenance. Interestingly, most of the meetings were, and still are, attended by only women.

They play a major role in the decision to install systems. As Nuwan, co-ordinator of the forum, pointed out, "Women decide because they are the ones who actually walk long distances to organise and carry water. They also have to cook food for the family." A great innovation has been local 'capacity building'. lrhf held multiple workshops for local masons to learn to build the system. The process has generated 20 skilled local masons, making the programme independent of 'imported' labour.

The eastward march of installing rainwater harvesting system has reached Palana village in Matara district, where most wells are abandoned and the few still there are used only for bathing. The owner of the 686th system, E D Ranmali, happily poses with her daughter in front of her new acquisition. "Everyday I walk for 20 minutes each way to get drinking water," she says.

It was an irony that she moved to her new house after staying in a temporary relief camp, but has to go there everyday to access tanker water, supplied only to the camp. "This will stop that," she says with happy finality. She has to only wait for a few more days as the tank needs to be flushed thrice before using water for drinking.