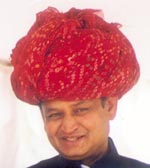 even the heavy monsoon may not be able to drown out the political parties' poll pitch with regard to drought-relief work in Rajasthan. The two major contenders in the state -- the ruling Congress and the Bharatiya Janata Party (bjp) -- are also likely to incorporate a host of development issues into their manifestos. These could range from devolution of power, construction of roads and imparting of education, to failure on the electrification front, rising unemployment and closure of industries. But it is the caste factor that will override other matters during the oncoming assembly elections in the state.

quota politics: In 1998, people belonging to various castes in Rajasthan suddenly started aspiring for the other backward caste (obc) status to get a slice of the reservation pie. This surge was a fallout from Prime Minister Atal Bihari Vajpayee's visit to the state during which he declared that Jats would be included in the obc category. Since then the situation has worsened.

While acknowledging the problem, Rajasthan Pradesh Congress Committee chairperson Girija Vyas backs the reservation concept contending that it is also required for those who are financially weak. It may be noted that in May this year the state cabinet, at a meeting chaired by chief minister Ashok Gehlot, decided to grant 14 per cent reservation in government jobs to the economically poor among forward castes.

bjp leader Hari Shankar Bhawda, who is a former deputy chief minister of the state, predicts that this time the caste issue will prove the clincher. Experts, however, see in such a line of reasoning an alibi to avoid genuine problems.

drought aftermath: The drought-relief operations in the state have triggered a blame-game between both parties. The bjp-led Union government provided 75 per cent share as foodgrains and the Congress regime in the state contributed the rest in cash. Things went awry at the implementation stage.

Rajendra Bora, chief of bureau, Press Trust of India, Jaipur, explains: "The state administration did not convey the nitty-gritty of its distribution scheme properly to the local people, and they failed to benefit from it. Even cash payment was delayed." It is alleged that huge sums were siphoned off by local officials and the construction was not up to the mark. For their part, both the Congress and bjp have declared the drought-relief work a success. They pass the buck to each other if any blemishes are brought to their notice. As regards the long-term water needs of the state, Bhawda insists that the river networking project of the Centre is the only way out.

partial progress: In February 2000, panchayat elections were held in Rajasthan, and the village bodies have been handed over charge of 17 departments since then. But experts maintain that authority is still vested in officials. "There is no financial devolution," asserts Aruna Roy, founder of workers' body Mazdoor Kisan Shakti Sangathan. The state's literacy rate increased from 38 per cent in 1991 to above 60 per cent in 2001. About 16,000 schools have been opened under the Rajiv Gandhi Pathshala Scheme. Questions are, however, being raised about the quality of education.

pressing problems: Resentment is brewing among the farmers because the Gehlot government has not been able to supply even eight hours of power to them on a daily basis. "This is the least electricity needed to cultivate two crops," says Bharoin Singh of Bassi village.

Govind Ram Sharma of Andhi village alleges that no political party has tried to address basic issues in the area such as the high fluoride content in drinking water and unemployment due to the shutting down of mines in Sariska Tiger Reserve. Many other industries, including Kishangarh's power looms and Sanganer's dyeing units, have also closed down, pushing up joblessness further. "The state government had promised to launch an industrialisation-cum-employment scheme with an outlay of Rs 40 crore. But the funds have not been released yet," says Manish Godha of local daily Rajasthan Patrika .

Meanwhile, Bora feels that the people are, by and large, happy with Gehlot's development policies. But the state bjp chief, Vasundhara Raje Scindia, may draw a few crumbs of comfort from the fact that there is a lot of bitterness against several sitting legislators of the Congress, who are said to be corrupt and have allegedly misused their powers. Whichever the party chosen by the electorate, it will have to address development issues to pull Rajasthan out of its current economic morass. The state's annual revenue recorded a negative growth rate of -2.01 per cent in 2002.