Five years ago, Bhim Singh lost all of his groundnut crop because his fellow villagers did not let him dig a borewell. With the advantage of hindsight, he is happy they stopped him. He says it demonstrated the commitment of the villagers to preserve and judiciously use the water resources at their disposal. Preventing Bhim Singh was Amritya's first brush with blocking borewells, though the village in Rajasthan's parched Bhilwara district had begun other conservation projects earlier. Bhim Singh was alive to the transition that Amritya's action against him marked. "There were two possibilities; either I would be ostracised or others would follow suit. I lost Rs 7,000- Rs 8,000 but all of us benefited in the end," he says.
Amritya village is pretty mixed with roughly equal number of families from the upper and other backward castes, and Scheduled Tribes.Bhim Singh was a Thakur, but that didn't mean that he was above the rules framed by the village collectively. Having stopped Bhim Singh, Amritya took on nearby villages, even when it entailed fighting powerful upper-caste groups.

The resistance to the borewells is grounded in the realisation that they are disastrous in a water-deficient region. In 2004, another person, Barda Dhakad from Ladpura, attempted to dig a borewell in a land closer to Amritya. The villagers tried to stop this--a tough task given the fact that Ladpura was politically powerful and Dhakad a Rajput. In March 2004, the villagers resisted Dhakad's first attempt and sent him off. In May he tried again. The villagers took the matter to the police, but were pacified and sent back. But they did not give up. "This time the entire village turned up against him. He even offered Rs 10,000 for the village temple. But the villagers stood firm," says Ter Singh. Even the pradhan of Ladpura supported the villagers' action, though borewells were not illegal. "Even his well would have dried up had Dhakad not been stopped," says Nathu Lal Gujjar, a villager. A few Thakurs from nearby villages, who had planned to dig borewells, were also forced to give up. Now, no borewells can be found within a radius of 4 sq km.
"Village dynamics are difficult to understand but certainly the Bhim Singh event acted as a trigger and now the trend should be difficult to break," says a project officer with the Foundation for Ecological Security (fes), an ngo based in Anand, Gujarat, that works in the region. "Otherwise it would become like any other village where water is treated as a resource, which is up for grabs. The sooner one gets to it, the more one exploits it. Even the trend of outsiders buying land in a village merely to dig borewells has been bucked in these cases," she adds.

The villagers say a borewell will start a race for grabbing water. The area falls in the dark zone, which means the water table there is not in good shape. For irrigation, besides wells, they rely on a canal that flows only in winter. Ladpura village, lying upstream of Amritya, does not maintain the canal peoperly. As a result, Amritya gets poor quality water, which also fails to meet the demand.

"In Jojwa village, hundreds of borewells left open wells dry. Even during the rainy season, when five borewells were dug, a hundred wells dried up," says Gujjar. Experience concurs with science. "Water flows from a higher seer (aquifer) to a lower one. A borewell goes down to 300 ft but an open well is only 50-60 ft deep at the most. It can have effects about 20 km away," he says. After borewells came up in Ladpura in 1993, the water level in open wells went down. 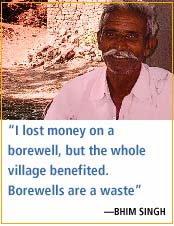 "There is extensive poppy cultivation in neighbouring Begu division, which requires higher quantities of water. Farmers had to sell ancestral jewellery to dig borewells. Often, these borewell didn't meet demand. They are now left with a barren piece of land," says Ter Singh. "A borewell is four times costlier than an open well," he says.


Amritya's story of resistance dates back to 1999 when the village got in touch with fes. Though initially they worked on the restoration of pasturelands, the focus was later shifted to reviving the watershed. The 'Devnarayan Jalgrahan Vikas Samiti', a watershed development committee, was formed in 2002, which banned borewells in Amritya.

Borewells are problem wells, says a working paper by fes. "In the area, many 800-feet tubewells went dry due to unregulated extraction. Villages were forced to set up water tanks to meet growing demand. The average age for a borewell in the region is five years, after which it may dry up and expose many unpaid, hidden costs, that of electricity and the cumulative interest over the borrowed capital." 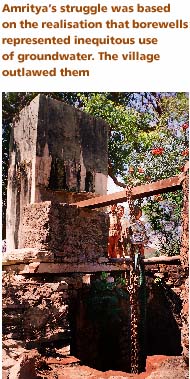 Amritya has built a water tank, which utilises the only bore in the village, which is just 50-60 ft deep. In 2005, the Public Health Engineering Department of the state planned a borewell in the village to supply water, not to Amritya, but to Ladpura. "We resisted the work till they promised a tank for our village too. They had already dug about 10 ft when we got there. The labourers were here for a month but we allowed no progress till the officers showed up. Otherwise, Ladpura, with its clout, would have left us thirsting for our own water. The tank for Amritya was made in March 2006. There were some hurdles with the process and the tank for Ladpura never got made," says Ter Singh. "We maintain this tank with our own funds", he adds. Madan Singh, a villager, says, "Now, when my relatives visit me, they curse themselves for their borewells. In many cases, many of their borewells have dried up. Our open wells also go dry in June. But there is water in March, which other villages don't have."

"A borewell is a waste. It also can go dry. We would allow a borewell only if there is a grave demand for drinking water," says Bhim Singh. "The power supply is erratic here. In such a case there will be little drinking water for people, let alone animals," he adds.

While the rich dig borewells to meet irrigation needs, the poor lose drinking water, they say. Water belongs to all, not just to those who can afford borewells, the villagers affirm. "I can't spend a lakh for a bore well. If Bhim Singh had dug one that would have lowered the groundwater table, then even we would need to dig borewells," says Gujjar. There are other cheaper options. "A pump in the open well costs just about Rs 600 for 15-20 bighas for a month," he adds.