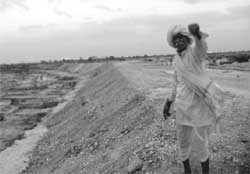 Ram Karan Bhadana, a Gujjar is not involved in sheep raring as others, but is committed towards the development of the village. He is a well-known activist for development works in the village with a population of 2,000-2,500. He was actively involved in creating awareness, giving importance to tree and pond worship, making ponds and removing encroachments from pastures.

He constructed three ponds one after the other and changed the face of the village. The first pond is named Phoolsagar because it is surrounded by flowers. The second pond is named Devsagar because of the temples that surround it. The third pond is directly linked with agriculture and is named Annasagar. Four chaukas (bunds) have been made to stop the water for livestock. The money was raised from many sources including their friends and relatives.

Bhadana says, "Earlier our people were going to Jaipur and other towns to work as labourers but now they are in their own village. The lands which were earlier not able to sustain them are now producing profits for them."

Ram Karan says, "The efforts of the villager folk and the motivation of Bhadana have changed the face of the village. We have made good channels for irrigation and started cultivating in the lands, which were lying barren earlier."