The tiny rodents that most people link only to pestilence and crop destruction have fascinated Ishwar Prakash -- one of that rare breed: a rat expert in India -- for most of his life 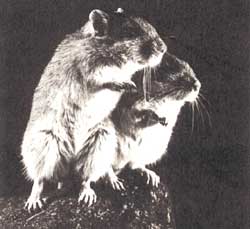 Most people go about their lives unaware of the world of rats and the ingenious ways of this common rodent. Not Ishwar Prakash, principal investigator, desert regional station, Zoological Survey of India, Jodhpur. Prakash is, in fact, one of the few rat experts in the country. Every detail he collected about the behaviour and ecology of rats through years of research is passionately recounted and recalled.

Rats, he says, are survivors above all else. They adapt to new environments with exceptional ease. This, of course, explains how they have spread to just about every corner of the earth. Study of these trends, as well as rodent ecology in general, is crucial to combating diseases, like rift valley fever, chikungunya fever, Hanta virus fever, leptospirosis, salmonellosis and the dreaded plague. A particularly favourite tale narrated by Prakash is that of Rattus rattus, the common house rat. This is a creature that lives and feeds on the ground. However, when a few stowaway rats found their way to Lakshadweep islands in one of the boats plying between Kerala and the islands, they faced a survival crisis. The fossilised coral ground was not amenable to digging, and consequently, the marooned rats had no hiding place. The versatile little fellows found a way though: coconut trees are in abundance on the islands, and the rats learnt to climb their way up the trees and live there. With plenty of food available on coconut trees, the rats felt no need to come down often. Rats on the islands were soon just as arboreal as monkeys. When some of these rats found their way back to the mainland, they continued to live up on coconut trees, causing the destruction of entire coconut plantations in Kerala.

Now shift to another element. Faced with a watery environment, these creatures are no more at sea than they were on a hostile island. In Korea, rice fields are the most conducive feeding grounds for rats. To feed on rice, rats learnt how to swim, and even made their homes over the panicles of rice plants.

The rats' migratory tendency has become even more evident in the last 50 years or so, with the quickening of developmental processes, such as building of roads, railway tracks and canals. In India, for example, rats previously confined to specific regions are now common in various other parts of the country. The Bandicota indica was once confined to south India, but is now seen all over the country. The rock rat, Cremnomys cutchicus, used to live in the rocky terrain of the Aravalli hills. Today, though, it lives in fields, finding shelter in the gaps in stone bunds.

On the one hand, development has destroyed existing niches, and on the other, it has created new ones in other areas, thus aiding the process of migration. This movement has also brought about the intermingling of different species of rodents, Prakash notes. For example, with extensive agriculture, fields start right at the backyards of farmers. This caused the getting together of field rats and house rats. The Bandicota bengalensis travelled with foodgrain laden trucks from Sri Ganganagar district in Rajasthan -- where it had originally come from the Punjab along with irrigation water from Ganga and Bhakhra canals -- to enter Bikaner. The Indian gerbil (Tatera indica) is predominantly a field rodent, not found in the old part of Bikaner. But in the outskirts, where the cities have extended their expanse, they are the predominant species, and have almost replaced Rattus rattus, the house rat.

Ishwar Prakash's fascinating rodents are, however, a cause for immense concern to human settlements. The recent outbreak of plague in a remote Himachal Pradesh village brings into focus our inability to control the rat menace and high-lights the lack of information about rat ecology.

In 1977, the Indian Council for Agricultural Research launched the all-India coordinated research programme on rodents with centres at Jodhpur, Bangalore, Ludhiana and Kasaragod. While this work cannot be extrapolated to emerging diseases, what it does highlight is that the rodent ecology is rapidly changing. There are also indications that environmental modifications are the main culprits behind the spread of these rodents.

Prakash has a possible explanation for some of the rat-related diseases emerging today. The coming together of different species of rats has resulted in the formation of small epicentres of diseases. (see box: Return of the plague) While this rudimentary inference is not difficult to arrive at, lack of information on the capability of different rodents to carry pathogens makes it difficult to control or predict diseases. Studies in other countries have shown that quite a few rodents are susceptible to the plague pathogen. The shrew Suncus murinus in Vietnam and the Bandicota in Bangkok have been found to be susceptible. The desert gerbil (Meriones hurrianae) in the Western Ghats also carries the plague pathogen.

While control of rat population does reduce crop loss, disease control is more complicated. Prakash suggests that the health and agriculture ministries should work together on rodent control. Traditional techniques used by farmers for rodent control have proven to be effective. One such method is poison, and Zinc Phospide is the most suitable, says Prakash. Anticoagulants are also an effective, though expensive, method of pest control. Prakash believes that fining persons who allow the rodent population to grow out of control would be effective in reducing rodent population. He says that this is an accepted practice in many countries. New Zealand, he says, even has a law for rat control.