Lakes were critical for Indian cities. They prevented floods and recharged groundwater. Today, these holes in the ground are either lucrative real estate for builders, the last resort for slum dwellers, or garbage dumps. In the past decade, concerned citizens have approached courts across the country to protect lakes in cities. The courts have responded with dramatic verdicts, most notably in Ahmedabad. But which way now? Even if the lakes are protected, how will rainwater reach them in densely built up areas? Through stormwater drains. But who will keep them clean? Municipalities have already failed. Will Indian cities rebuild their water wealth? DOWN TO EARTH assesses 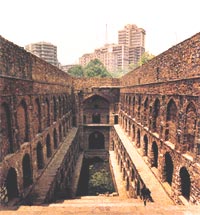 Concrete drama
Actsaid the court. The government did not. The realtors are at the deep end now

since April 182001new construction activity in Ahmedabad has virtually come to a standstill. The realtors of the commercial capital of Gujaratone of the two most industrialised states of Indiaare desperate. Builder after builder talks about diversifying into other sectors to avoid bankruptcy. More than 700 applications for new buildings are pending with the authorities and no new construction is happening in an estimated 70 per cent of the city's land. The overall loss of business in real estate could be up to Rs 6500croreestimates the president of Federation of Real Estate Developers Associations of Gujarat. And this does not include the 250-odd ancillary industries that depend on real estate developmenthe says.

Why? Because the Gujarat High Court acted in response to a public interest petition filed in October 2000 to protect lakes and increase water availability in the city (see box: Courtspeak: The script). After waiting for almost six months for the authorities to respondthe court restricted new constructions in a radius of 500-10metres around 137 pieces of land that the additional resident deputy collector had listed as lakes in his affidavit dated November 202000It also directed the authorities to ensure that "lakes are used as lakes". At least 65 of these 'lakes' exist only on paper -- from houses and schools to stadiums have been built on them with official sanction.

It is a bind for the Ahmedabad Municipal Corporation (amc)the Ahmedabad Urban Development Authority (auda) and the state government. Officials and politicians say the order has held development to ransom. But they have no alternative plan to protect waterbodiesa fact highlighted by the court's exasperation. A lot of buildersand even the Indian Institute of Managementhave filed affidavitsasking the court to modify its order. On April 52002the court formed a five-member committee of experts to advice it on the matter (see box: People who count ). The committee faces the daunting task of finding ways to protect lakes when many of them have already been built upon. Howeverthe issue had come to light not because of experts but citizens who approached the court. Like Shailesh Shaha trader in pharmaceutical raw materials.
Shah lives in Mani Nagar in southeast Ahmedabadwhich neighbours Chandolathe biggest lake of the city. During his childhoodhe has seen crocodiles in the lake. Todaythe lake has been reduced to a dry dustbowl with encroachments dotting its periphery. There are several illegal units that recycle waste automotive engine oil and plastics and dump refuse freely in to the 'lake'. Water shortage in the area is severe.

The summer of 2000 had seen widespread civic discontent due to water scarcity in several parts of the state (see 'Riots for water' Down To EarthVol 8No 16; January 152000According to auda's Revised Development Plan 2011the city's 4.6 million people need 221 million cubic metres (mcm) of water in a year; the city draws 200 mcm/year from tubewellsagainst a safe yield of 80 mcm/year. By 2011the water demand is estimated to climb to over 300 mcm/year. The entire region under auda depends on groundwater. The water table is dropping by 2-3 metres per year: It was 12-15 metres in 194060metres in 1984and 100 metres in 1996. And there is too much fluoride in the groundwater.

Yet on July 13-142000when it rained 508 mm in 24 hoursthere was widespread flooding in the city's suburbs. And then water scarcity returned as soon as the monsoon got over -- so much so that it became a political issue in the September 2000 elections to the amc. The bjp lost control of the amc for the first time in 13 years to the Congress party.

Now Shah also runs a civic action group that is ideologically affiliated to the bjp. Concerned about water scarcity and government inactionhe along with 69 other residents of the area collected Rs 10each towards legal fees and filed a public interest petition. They pleaded that

• Provide land records of big and small lakes in and around Ahmedabad as on (say) 1960 and their present status;

• Remove encroachments from the Chandola lake; and

• Desiltrevive and recharge the Chandola.

Petitions were also filed to revive the two other lakes: Lakhudi and Memnagar. The court combined the matters. Shah recalls the court commending him for raising the issue. Buthe sayshe would never have approached the court if he'd known that his petition would lead to restriction on building activity. He says he tried to withdraw the petitionbut the court refused. Several of his friends have rebuked him for what his actions have led tothough he denies receiving threats from builders.


A senior journalistwho has covered politics for more than three decadessays that if he were the editor of a daily newspaperhe'd have a reporter regularly covering the real estate beat because that's where the real politics lies. Surendra Patelchairperson of audais also the influential state-level treasurer of the bjp. In 2000the bjp government repealed the Urban Land Ceiling Act of 1976releasing a lot of formerly disputed real estate for development.

In September 2000after the court had ordered amc and auda to crack down against illegal constructionsthe state urban development minister went on record to say that the buildings should not be demolished. The municipal elections were round the corner at that time. Two months laterthe court ordered disconnection of electricity connections to 150 buildings for non-compliance with fire prevention and safety norms. The issue became a law and order crisis with widespread protests and violence against the order. The January 2001 earthquake showed how builders had flouted norms. And after the high court restricted new construction around lakesthe General Development Control Regulations (gdcr) were modifiedallowing constructions nine metres away from a waterbody.

Realtors explain that the business became big after the textile mills of Ahmedabad closed in the late 1980s. With economic liberalisation bringing in a lot of money in the early 1990sreal estate prices went through the roofpeaking in the mid-1990sand then falling again. Down To Earth spoke to some builders to understand how the sector operates. On the condition of protecting their identitythey explained how the builder-politician nexus "can work". It is by no means impossible for builders to have prior information on which area is being earmarked for development. They can buy land from farmers in these areas at rates of agricultural landand get incremental value once the land is included in a town planning scheme (see box: Death by development ). The builders point to at least three clear ways to appropriate lakes.

• Lakes usually belong to the revenue departmentand revenue land is the easiest to encroach. Once squatters take overthey obtain political patronage in return for votes.

• The land use is legally altered in the government records to make room for other public utilities like a stadium or a park or a school. It includes building houses for poor people. But once construction beginsthe builders can step in and create 'stock'selling it at market rates.

• It was a common practice earlier in villages to grant rights to people to harvest produce from lakesfor examplewater chestnut. Over a periodsuch lands got registered in their name. Builders purchase these lands and develop propertybut this requires the collusion of the village sarpanchthe circle inspectoror officials of the revenue or urban development departments.


Almost all the people who spoke to Down To Earth -- town plannersarchitectsbuildersofficials -- were critical of the court order. They questioned the scientific basis of restricting new construction as most of the area has already been built upon. But then nobody has another figure that is based on science. Besidesthe order cited the Supreme Court's ruling in the Surajkund and Badkal lakes casein which the apex court had restricted all new constructions in a five-km radius (see p36). Nobody was appreciative of the precautionary principle in the absence of any concrete proposal by the authorities.

Another obvious question: if the powers that be are convinced that the court order is flawedwhy haven't they asked for its modification? Apart from requests to permit reconstruction of structures affected by the earthquakeDown To Earth could not find in the court papers any mention of a move from the authorities for a modification of the order. The auda chairperson said that the authority requested the court to modify the order. But he avoided sharing the paperwork on this with Down To Earth .

Journalists who have covered these issues for years say the authorities want the court order to collapse under the weight of mounting public pressure. Builders talk about labourers' woes due to loss of employmentwho are in any case exploited and underpaid. The auda chairperson and bjp treasurer said it was wrong to raise the question of any pressure tactic to provoke public anger against stopping of development projects. He retorted: "If the court order is not rightdevelopment comes to a halt. We can't grant development permissions on 95 per cent of the land. What's the point? How will the city develop?" He questioned the logic of stopping development merely for lakes. He said the court overlooked the public interest litigation (pil)and that he is pained at the fact that the court has shut its eyes to the fundamental question of encroachment. He demanded a stronger order from the court to be able to remove encroachments.

The mayor of AhmedabadHimmatsinh Patelwhen asked about the administration's failure in removing encroachmentssaid: "Encroachment hai hi nahin " (There are no encroachments). When asked about the widespread encroachments around lakeshe said the encroachers return soon after municipal authorities remove them and that it was not possible to keep out the temporary establishments of migrant workerswho are helpless and harmless anyway. When asked about the waste oil that is illegally dumped on the bed of the Chandolahe said it was the duty of the environmental authorities to stop such activities. He also indicated that cities do not usually have lakesnot like in villagesand that wherever you have lakes in the city there's bound to be filth. "Where will the water for lakes come from in a built up area?" he questioned. But when asked how he planned to recharge lakeshe said: "The lakes have been dug up and left there. If God so wisheswater will reach the lakes." As for floods in the city durng monsoonhe said that not much can be done in the case of a natural disaster.

As things standthe role of the committee will be crucial in deciding which way the case proceeds. Another factor that will have a bearing on the case is that one of the two judges on the two-judge benchB C Patelwho took a keen interest in the matterhas been shifted to the Jammu and Kashmir High Court. A new judge will take his place after the court's summer vacation ends. Watch this space for what happens next.